Lakeville, Conn. – Rum Bum Racing delivered in a big way at Lime Rock Park on Saturday as the defending IMSA Continental Tire SportsCar Challenge GS Champions took victory in the Northeast Grand Prix which marked Round 4 of the 2014 championship. It was a familiar sight as drivers Nick Longhi and Matt Plumb combined for their fourth consecutive Lime Rock Park podium and their third Lime Rock win in four years.

The starting grid for Saturday’s 2.5-hour race was set by championship points after qualifying was rained out on Friday which saw Longhi open the event from sixth. He immediately went to work in the No. 13 Rum Bum Racing Porsche as he moved up into the fourth position and ran among the top-five throughout his stint. He had moved up to second in the order when Crew Chief Joe Varde called him to pit lane for a routine pit stop and driver change. 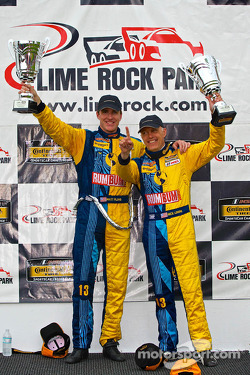 Plumb took over driving duties with less than an hour and a half remaining in the race and returned to the track fifth in line. He took over the fourth position just prior to the one and only caution period which was displayed with just over an hour to go. Plumb brought the No. 13 Porsche to pit lane for the team’s final pit stop.The key moment of the race came during the pit stop as Varde called for only left side tires and fuel. That call saw the No. 13 Porsche exit pit road 15-seconds ahead of the closest competitor and Plumb return to the track with the race lead.

“I really focused on my stint from the beginning just trying to lay down laps that didn’t hurt the tires,” said Plumb of the final stint. “I’m always thinking that I’m not going to get a new set of tires - I’m always thinking ‘what is the team going to do that’s going to leapfrog me up in track position?’ and I knew that was going to be critical. I just tried to save the tires while trying to keep the pace. The pit stop was insane. It was faster than everybody else. After that, it was just about maintaining the tires and judging the gap and judging the traffic.”

The No. 13 Rum Bum Racing Porsche led the most laps of the race and made the most of the clean air up front to set the fastest race lap on the way to taking the team’s first victory of the year.

“This is the perfect example of how our crew, Joe Varde, Bob, Ed, John and Terry, this is how they perform,” added Plumb who also serves as Rum Bum Racing’s Team Manager. “The car was great. It was decent in practice and then qualifying got rained out so we never got to see what we could really do. But the team made a ton of changes overnight and the car was brilliant. Again, I say it every time, but it is almost just up to me not to screw it up in the end because the team is the genius here and it feels really good to win.”

The win is even more special for Longhi and Plumb who each call Lime Rock Park their home track.

“We have such a strong team and we are so happy to be here, we have a lot of friends here,” enthused Longhi. “This is a fantastic place and track and it has been so good to us and we have good karma here. So thanks to all of the fans! As for the team, I just don’t know what to say. Joe Varde and the whole crew worked so hard today. I got a little optimistic on the start, then with some hard work from the team and I got out of the car and Matt took it to the win, so that is fantastic.”

Rum Bum Racing next travels to Kansas Speedway, where the team finished second last year, for Round 5 of the 2014 IMSA Continental Tire SportsCar Challenge championship.