Mooresville, NC - Opportunity has come knocking for Tim Bell Racing, and the team is ready to answer the call as the newest IMSA team entrant prepares for the 2014 IMSA Continental Tire SportsCar Challenge (CTSCC) season.

Experienced CTSCC driver Tim Bell took advantage of an extraordinary opportunity to quickly assemble a new team, and formed Tim Bell Racing in the off-season. Even though 24-year old Bell is the youngest team owner in the CTSCC paddock, he had both the passion and connections to hire a group of very seasoned racers to support the team's 12-race championship effort. 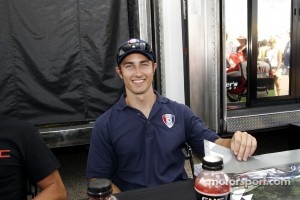 Bell, who first stepped up to the IMSA ranks as a driver in 2011, will be joined by fellow American pilot Dane Cameron as the two look to make a strong showing in the GS Class Championship. The duo will share the driving duties in the No. 28 Tim Bell Racing Nissan 370Z starting with the BMW Performance 200 at Daytona International Speedway on January 25.

Leading the effort will be experienced team manager Brian Richards, who has held similar roles at several other top-tier teams.

“I’m really excited to be making this next step in my racing career,” said Bell, who led laps last year in a Nissan 370Z. “This was an opportunity that was too good to pass up, and I’m proud to be working with guys of this caliber. I know from past experience that the Nissan 370Z is a great platform for this series. With Dane and me driving, and Brian (Richards) managing the program, I’m optimistic about the results we can deliver as a new team.”

While the sign on the door at the team shop in Mooresville, North Carolina is a freshly-painted one, the group has no shortage of experience and is expected to be a factor from the drop of the green flag in Daytona.

“It takes so much to win one of these CTSCC races,” said Cameron. “Every part of the program has to be polished and Tim (Bell) is doing a great job of putting those pieces in place. I think this (Nissan) 370Z will be a competitive package, right out of the gate.”

Cameron, who impressed in his debut season behind the wheel of Daytona Prototypes last year, will be making his first full-season campaign in the CTSCC and is looking forward to the new challenge.

“There is no question that this is one of the most competitive categories out there, and it deserves a lot of recognition for the caliber of drivers that are finishing these races,” said Cameron. “There are always great finishes because there are always five or six cars that are capable of winning, each weekend. We want to fight for the championship, so the big thing is to be consistent all year long.”

Moving from being a driver to a dual-focus role as team owner, Bell will aim to make the most of some familiar surroundings as he looks to lead more laps from behind the wheel of the Nissan 370Z.

“Tim (Bell) has raced Nissans in World Challenge as well as IMSA, so we are really excited to see him growing his association with Nissan as he takes on this next stage in his racing career,” said Rick Kulach, Motorsports Manager for Nissan North America. “Tim is a smart guy and he learned a lot during the last three years racing a wide range of cars. I think with everyone that he has brought in to be a part of this effort, they should be a strong team and we are excited about this new effort.”

The 2014 IMSA season-opener will see Tim Bell Racing stage a one-car campaign, with the team evaluating options for a second GS Class Nissan 370Z entry as the year progresses.

“Tim is a young guy but he has a really good head on his shoulders and has done a great job pulling this group together,” said Richards. “He and his dad have been wrenching on cars for years together, and the enthusiasm for the sport that flows through the whole family is just incredible. This is an opportunity to really build the best team, and that was what made the difference for me to come on board.

Building these first-class cars and team in literally just a few weeks has been a team effort. The Nissan 370Z is a great choice for this series. The last few years have shown that you have to be consistently strong, no matter what the track is like, if you want to have a shot at the championship. Two exceptionally talented young drivers in a 370Z is exactly the right combination to do that.”

The team recently wrapped up some shakedown testing ahead of making its first official appearance at the “World Center of Racing” as the next era in IMSA racing opens January 25.