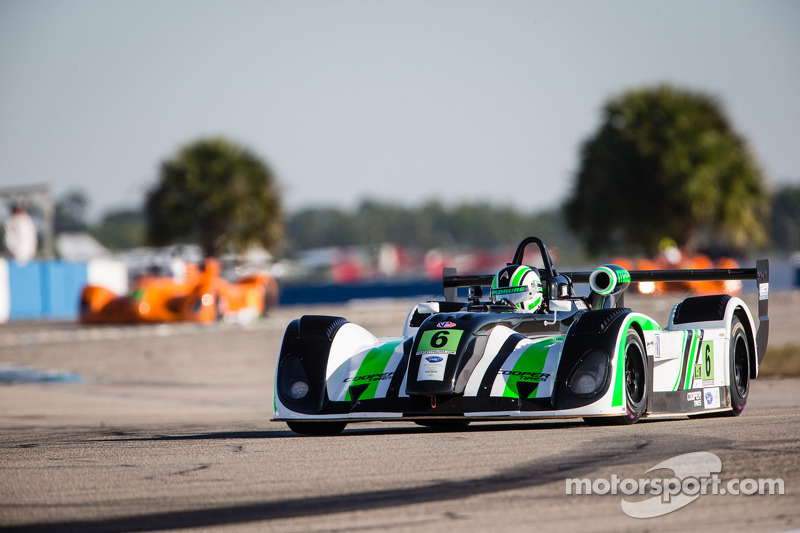 The young gun's passion for engineering could prove valuable on the track.

Braselton, Ga. - (April 15, 2013)-- Daniel Goldburg took home the first Cooper Tires Prototype Lites Powered by Mazda win of the season at Sebring International Raceway on March 16, and his background in the mechanics of engineering may give him the added edge he needs to be a driver to beat as the season unfolds.

My passion is for driving and the intense pressures and competition you face behind the wheel.

Goldburg joined Performance Tech in 2011 and ran three races during each of the 2011 and 2012 seasons. In 2013 he will compete in the full season with the team.

The New Jersey native comes prepared for his first full season with experience not only behind the wheel, but also a firm grasp on the mechanics that make him fast. Goldburg graduated from Cornell University in 2000 with a Bachelors of Science in Industrial Engineering.

"While the specifics of industrial engineering do not come into play at the racetrack, the engineering skill set comes through on a daily basis in much of what I do," Goldburg said. "I utilize data extensively to understand my performance and where I can improve and I study race car engineering so I can provide the best possible feedback to my team engineers."

Goldburg's experience and training allowed him to oversee a small crew that supported his car for the previous nine years before joining Performance Tech.While he enjoys the engineering aspects of racing, his true passion lies in the driver's seat.

"I enjoy the engineering side of the race car, but my passion is for driving and the intense pressures and competition you face behind the wheel," said Goldburg.

Pressure and competition are what drives Goldburg both on and off track. He runs Construction Services & Consultants, LLC (CSCI), a structural contracting business based in South Florida that operates coast-to-coast.

When racing is on his mind however, he has a well-formulated plan to minimize the off-track stress filtering into a race weekend to maximize his on-track enjoyment.

"I defer calls, personal calls, and other distractions that could add unnecessary stress," explains Goldburg. "However, it is the Performance Tech team that is the most crucial element of minimizing stress. I trust in them completely to prepare for me a car capable of winning for every session. Removing any car concerns allows me to focus on the day's tasks."

Like a true athlete, Goldburg also relies on exercise techniques to help calm him down during peak moments of racing.

"I employ techniques I have learned through yoga to minimize adrenaline spikes at key times, like race starts," said Goldburg.

Yoga takes a backseat during the race season, but the 34-year-old driver adds other forms of exercise to his routine including plyometric and cardio training.

With the 2013 season barely underway Goldburg aims to keep calm, cool and collected moving forward. While he could quite easily switch gears to become more involved on the business or mechanical side of racing,

Goldburg does not plan on handing over the wheel anytime soon.

"I am still a young driver, so I have a whole career of highly competitive driving ahead of me," Goldburg said. "When I am behind the desk, I am focused on my construction business. If I am at the racetrack, you will most likely find me behind the wheel, and I don't think that will change later in my career."

Look for Daniel Goldburg to be a series stand-out at the next event on the Cooper Tires Prototype Lites Powered by Mazda schedule at Mazda Raceway Laguna Seca in Monterey, Calif. May 9-11, as he strives to fulfill his championship goals and aspirations.

Motorsport.com to webcast IMSA Prototype Lites races and other events