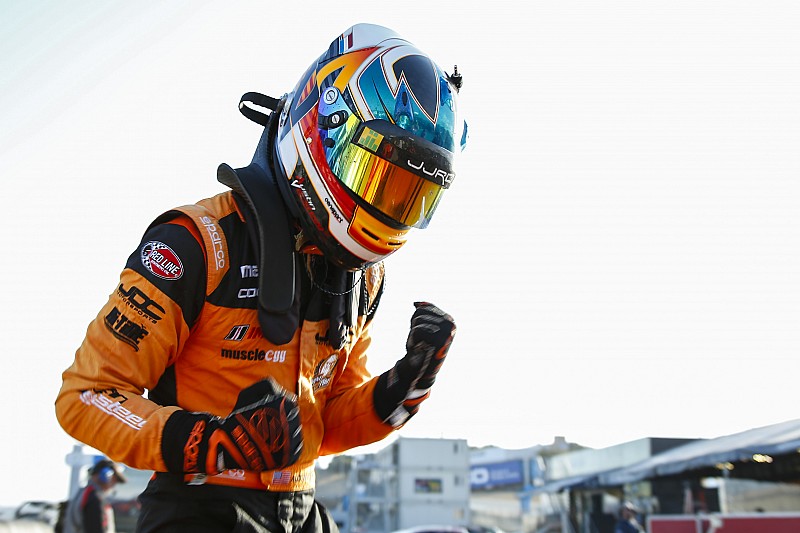 Well, it's safe to say that I've experienced my first street race in a car! The Grand Prix of Trois-Rivières (GP3R) on Aug. 12-14 in Quebec was an amazing event even though the weekend didn't go as well as planned. The very short track was a blast to drive! You were always busy in the car around this circuit.

As a driver, I had to get up to pace very fast with only two practices before qualifying. The car was amazing all practice, and I felt that I had a great car underneath me headed into qualifying. After the first two practices and the morning of qualifying, the track was great! For a street course, the track had a lot more grip than I expected.

GP3R was the busiest qualifying session I’ve experienced because the track is so short and bumpy. You had to drive flat out during all 20 minutes of this session, using every second to the max. The car was very good, and I was able to pick up pole position for both races.

After qualifying, the weekend didn’t go quite to plan. We started race one on a track that was damp, which led to an interesting first couple of laps. The track wasn't too bad, as I stretched out a two-second lead in the opening laps. Unfortunately, as the laps continued, I had a motor issue causing me to lose the lead. I also had a brake issue, and both problems caused me to spin and lose positions. But we managed the issues, and I was able to finish sixth.

Race two was later the same day, and the boys at JDC Motorsports did an amazing job at getting the car back together in a couple of hours. We started on pole for race two, as well. Unfortunately, as we did our pace laps, I had to pit on the opening lap due to an issue with the engine that caused me to go to the back of the pack immediately. We went four laps down before the JDC boys were able to get me back on track. We had very fast pace through the rest of the race while fighting up the field. I was running sixth on the last lap before we had an electrical problem that ended our race. It was an unfortunate end to an event that had such amazing atmosphere.

I was able to truly experience the GP3R event and area surrounding Trois-Rivières after I was out of the car and in town. The racing culture around the event was amazing, as the entire town was shut down and focused on this event. It was so cool.

After a break of a month, I was ready to get back into the car for the second triple-header of the year, on Sept. 9-11 at Mazda Raceway Laguna Seca. It was a special weekend because Mazda had all of its development series there in an all-Mazda race weekend. We had two practices before qualifying, and unfortunately we still had some electrical issues that caused me to get in only about 10 laps in two practice sessions before qualifying.

As qualifying came around, the car was great, but the session was very choppy. I was able to qualify second for race one and on the pole for the two other races we had the next day. Mazda Raceway is a very fun track to drive but a very hard track to race on. In an aero-dependent car like our Élan DP02 cars, it is very hard to get close to the car ahead of you. I struggled with this in race one. Our pace was faster than the leader, but every time I got close, I lost air over the car and all the ground I had gained. The leader and I were managing our way through traffic, and in the closing stages of the race I was able to manage traffic and capitalize on a leader’s mistake to take the lead and race one win. It was great to get back on the podium after a rough race weekend at GP3R. It was a short celebration, though, because we still had two more races the next day.

I started on pole for race two of the Mazda race weekend. I got a great jump at the start of the race and stretched out a 4.4-second lead in the early stages of the race. Closing up on 33 minutes to go, an engine problem caused me to drop out of the race from the lead. As they did in Trois-Rivières, the JDC boys did an amazing job to get a new engine in the car before race three a few hours later.

I started first in the final race of the weekend and led from green to checkered. In the early stages of the race, I pulled out a six-second lead before the first of two yellows. On the restart, I had a great jump and pulled out a small gap before we went yellow once again. The second yellow was a very fast one, and we went green the next time by. I had another great jump and pulled out a four-second lead in the second half of the race en route to my seventh victory of the season. The car was stellar throughout the entire race, and I cannot thank everyone from JDC Motorsports enough for what they continue to do week in and week out.

Overall, it was a very positive weekend heading into the final two rounds of the season Sept. 28-30 at Road Atlanta during Petit Le Mans.

I want to say thank you to all my sponsors, Muscle Egg, Papa Pita, Dep Patch and Wheel Woolies for continued amazing support and the great products they provide. I can’t wait to race in the last two rounds of the year!