Braselton, Ga. (27 December 2017) – Following the news that TeamTGM will move to the all-new Mercedes-AMG GT4 next year, the team is pleased to announce the drivers for the two-car 2018 IMSA Continental Tire SportsCar Challenge (CTSC) effort.

The 2017 season saw Ted Giovanis team with Guy Cosmo for the full schedule, with Hugh Plumb integrated into the long-distance race events as well as part of the team testing efforts. That strong core will get even more speed and experience with the signing of IMSA veteran Owen Trinkler to the TeamTGM roster for 2018. 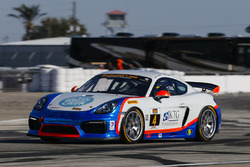 Eager to take delivery and put the two Mercedes-AMG GT4 machines through their paces ahead of the 4-hour season-opener at Daytona on January 26, TeamTGM is poised for a strong run in GS Class competition. TeamTGM races with the dual ambition of on-track success, as well as growing the profiles of the The Jayne Koskinas Ted Giovanis Foundation for Health and Policy and Camp Boggy Creek.

Among those setbacks was the injury suffered by TeamTGM lead driver Giovanis after he was hit in practice at Canadian Tire Motorsport Park and forced to vacate his driver seat for the second half of the season. He’s now looking forward to getting back behind the wheel of a race car—particularly as the team has made the move to an all new platform with Mercedes-AMG’s new GT4.

“The AMG GT4 is set up more like a GT car since, in many respects, it was based upon the Mercedes-AMG GT3,” said Giovanis. “A lot of the AMG GT3 shines through in the AMG GT4. As such, the driving dynamics will be more like that of a race car. As far as drivability, the car is turbo charged and will have more torque off of the corners which will help in the raceability area relative to the other GS cars.” 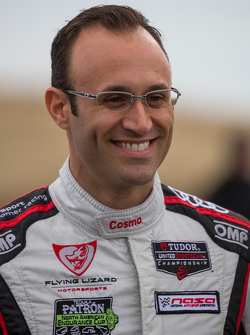 For Cosmo, there has been no winter break as he heads to Daytona fresh from an Asian Le Mans Series victory at Fuji and a podium finish in the Gulf 12 Hours of Dubai. Cosmo is eager to make his return with TeamTGM as part of the expanded effort from the team.

“I’m thrilled to be back with TeamTGM for my second full season,” said Cosmo. “Ted Giovanis has been so committed to this team, his development as a driver and to all of the wonderful people that TGM is comprised of, it’s a special place to be and I’m thankful for another opportunity to be here. I’m looking forward to continuing what we started late in 2016, when we secured a podium finish in our very first race together. 2017 was not a very kind racing season to us but we developed as a team, grew stronger and put forth some great plans for 2018. I feel there’s a great season ahead of us.”

Plumb, who was entered in the long-distance events last season and supplanted Giovanis following the injury, looks forward to taking to the TeamTGM Mercedes-AMG GT4 for the full-season. Plumb’s talent aided the team in scoring an impressive top five result at Road America last season.

“I’m really excited to be part of the TeamTGM program again in 2018,” said Plumb. “Ted Giovanis has been tactically assembling a great squad of professionals for all aspects of his team. That really is his forte, and it is similar to what he has done with the JKTG Foundation— named in honor of his late wife — and the hand-picked analysts and researchers helping to be a part of curing cancer. So being a part of an organization like this is truly an honor. Debuting a new Mercedes-AMG GT4 is a great match and I look forward to taking them to their first Continental series podium and win.”

The final and newest addition to the TeamTGM roster is Trinkler, who is one of the most successful racers in the IMSA paddock. With 20 years of experience in sports car competition, Trinkler’s winning close to the 2017 season demonstrated that he’s lost none of the shrewd aggression that has his name among the winningest in the category. With over 135 career Continental Tire SportsCar Challenge starts, Trinkler will be a big asset to the team ahead of 2018. 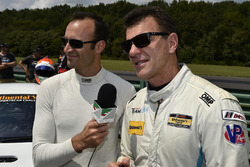 “I’m so thankful for the opportunity to get to work with TeamTGM for the upcoming season,” said Trinkler. “I’m coming off a strong season racing in ST with two wins so I am looking forward to working with the guys and continuing that momentum. I’ve known Guy (Cosmo) and Hugh (Plumb) for a long time and to be able to combine our efforts will prove to be a strong lineup, then you add the AMG Mercedes in there.”

For Trinkler, the move to GS class competition marks a homecoming following 10 years in the ST class ranks.

“I’m just excited to be back in GS,” said Trinkler. “2007 was the last time that I competed in GS. What Ted (Giovanis) has assembled, I truly believe we can go for the championship this year. Both cars should be very competitive and should be at the front of the field.”

Giovanis had no doubts when adding Trinkler to the TeamTGM roster as he believed that Trinkler would be an invaluable asset as well as mesh well with the team and crew.

“Owen will be great in both driving and team integration,” said Giovanis. “I’ve known Owen (Trinkler) since 2013 when I drove Porsche GT3 cup cars at Barber Motorsports Park. Owen knows most of the team members and some of our current crew assisted Owen’s prior team on race weekends. Most importantly, Owen likes to have fun and while TGM is serious about racing, fun is part of what TGM is."

The 2018 season will kick off at the annual Roar Before the 24 event at Daytona International Speedway on January 5th-7th, all leading up to the season opener, the BMW Endurance Challenge on January 26th. The team will make a decision on the line-ups for each car following testing.

Cosmo and Byrne head into Round 3 in Buriram

Toto Wolff says Formula 1 cannot “hide away” from tackling social issues in some of the Middle Eastern countries where it races, believing sport can help bring positive change.