Although it may not be the top step on the podium, the #46 drivers John Edwards and Trent HIndman take the Championship lead with today's finish.

Sebring, FL - Fall-Line Motorsports looked to have the race win in the bag earlier today at Sebring International Raceway for the second race on the IMSA Continental Tire SportsCar Challenge (CTSCC) series schedule. Trent Hindman and John Edwards started from pole for the 2.5-hour race and had a substantial lead on the pack for a good part of the race. 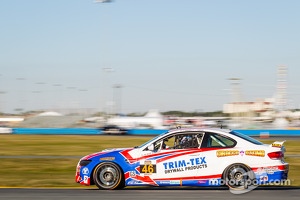 They ended up finishing P2 when the race ended under caution. Teammates Ken Wilden and D.J. Randall finished the day in a solid P6 and series leaders heading into the Sebring event, Shelby Blackstock and Ashley Freiberg suffered a mechanical failure and ended up P20.

Hindman started off the first part of the race driving away from his competitors and built up a nice gap before pitting and handing over the reigns to Edwards. With a perfect pit stop and an unbelievably out lap Edwards managed to build a 13-second lead with just under an hour remaining when the track went yellow. The restart with just 30 minutes to go turned out to be the pivotal moment and Edwards got shuffled back to P2 when the field bunched up heading into turn one and Edwards lost the lead.

He never got the chance to make a move for the lead as the race ended under caution due to a nasty wreck in the ST field, which heavily damaged the barrier at turn seven. This is the second race in 2014 and this finish makes 2 for 2 second place finishes. Although it may not be the top step on the podium, the #46 drivers take the Championship lead with today's finish.

John Edwards: "I hate to be upset about second, but it's still hugely disappointing not to win on such a strong day. I didn't have a great run on the restart,. I had to lift to avoid passing the safety car before he got to pit road. That gave Robin a great run, and then the #12 hit the brakes earlier than I expected for turn one and I had nowhere to go with Robin (Liddell) on my right. Luckily we came away with second and got the points lead."

Trent HIndman: "It's definitely disappointing finishing P2 after leading much of the race, but John (Edwards) did a heck of a job bringing it home. Coming out of Sebring with the points lead is definitely worth all of the hard work. Again, awesome job by everyone at Fall-Line Motorsports for giving us a great car all weekend. I also have to thank our partners at Trim-tex Drywall, Cirocco & Ozzimo, Atlas Acon, and DFL Interiors for all of their support."

The #47 car was driven this weekend by veteran Ken Wilden and his co-driver of D.J. Randall. The duo started the race in 15th but made fantastic progress and finished in 6th.

Ken Wilden: "We had a great drive in the Fall-Line BMW and D.J. (Randall) ran an awesome first stint. We made a quick change on the pit stop to help handling and it worked great. I just wish we would have had the last 20 minutes under green to see what we could have done."

The #48 started in 6th place today driven by Ashley Freiberg who, along with co-driver Shelby Blackstock, were the defending race winners from the season-opener at Daytona. They were also, naturally, the point's leaders heading into this weekend's event and had a very strong chance at a podium finish at the very least. Their hopes were squashed as the extremely rough track that is infamous at Sebring caused an upright to fail due to the enormous amount of stress the constant bumps over the 3.74-mile course. Blackstock made a remarkable save when the failure occurred at a high-speed corner and managed to bring the car in for repairs. Replacing the damaged suspension was a length process but the talented Fall-Line crew made quick work of it and got him back out on track to salvage as many points as possible.

Shelby Blackstock: "Today definitely didn't go as planned. Ashley (Freiberg) said something felt weird with the car on how it was handling in the beginning. When I got in, the rear was unpredictable and very loose. Coming through turn 16 the left rear broke and nearly sent me into the wall. I luckily kept it on the track and came in for repairs. It was not how the #48 team wanted their day to go but hopefully we can have better luck in Laguna!!"

Ashley Freiberg: "What a bummer to have an issue like that take us from 4th to 20th, but hey, what can you do? I definitely felt that there was something going wrong from the start of my stint, but at that point there is not much you can do except drive through it. Unfortunate to have happened during Shelby's stint, but what an epic save he had when it broke! Big congrats to my teammates Trent and John for a great drive today. Let's go get 'em at Laguna!"

Michael Harvey, Fall-Line Motorsports Team Manager: "Another very solid day for the Fall-Line BMWs, although frustrating for the 48 car. This result is a true testament to everyone at Fall-Line and their dedication and commitment to this program. It is very satisfying to retain the points lead heading to Mazda Raceway and I am extremely proud of everyone at Fall-Line. I am so proud of our drivers, with a mix of youth and experience this team really works well together and they inspire each other to become better at what they do."