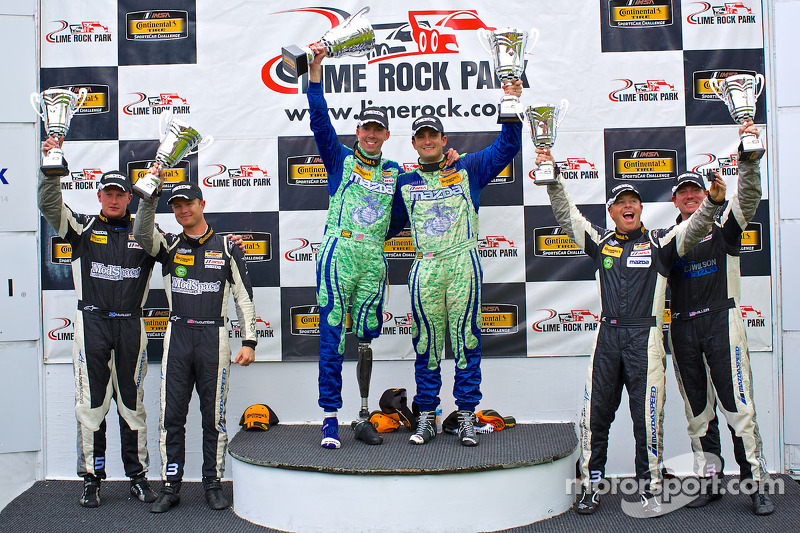 LAKEVILLE, Conn. – When Derek Whitis formed a race team with Rhett O’Doski in 2006, he decided to name it Freedom Autosport to honor the men and women who protect our country. “Got Freedom? Thank a Vet,” was the motto on the team’s T-shirts in the Continental Tire SportsCar Challenge.

The team is fielding a third Mazda MX-5 for three races this season, honoring United States Marine Corps Staff Sgt. Liam Dwyer, who grew up in nearby Litchfield, Conn. He lost his left leg in Afghanistan three years ago and drives with a prosthetic limb. Saturday, Staff Sgt. Dwyer and team manager Tom Long combined to win the Northeast Grand Prix at Lime Rock, taking Staff Sgt. Dwyer to victory in his second professional race.

Staff Sgt. Dwyer started last in the 33-car field set by points when Friday’s qualifying was rained out, as the co-drivers of the No. 27 Mazda MX-5 had no points in 2014 competition. Staff Sgt. Dwyer worked his way up to 25th when he pitted during the second caution period, which came out 26 minutes into the event.

Long drove the remainder of the event, and engaged in a heated battle for the lead with Stevan McAleer in the No. 5 CJ Wilson Racing Mazda MX-5 over the last half of the race. Long and McAleer traded the lead five times before Long took the lead for good with five laps remaining when McAleer pitted for a splash of fuel.

Long successfully stretched his fuel load to the finish – and also overcame a spin in Turn 7 – to take the victory.

“My brother Chris kept telling me to conserve fuel,” Long said. “That’s not easy to do when you’re battling for the lead. The gauge on my dash said I had eight-tenths of a gallon remaining at the finish.”

McAleer finished 19.950 seconds behind Long in the No. 5 CJ Wilson Mazda MX-5, as he was forced to serve a drive-through penalty for speeding on pit lane following his last stop. Starting driver Chad McCumbee matched his best career finish, with the pair taking second at Sebring earlier this season. The team owned by Los Angeles Angels of Anaheim pitcher C.J. Wilson placed two cars on the podium, with Tyler McQuarrie and Marc Miller taking third in the No. 3 Mazda MX-5.

Jeff Mosing and Eric Foss finished fourth in the No. 56 Murillo Racing/Mosing Motorcars BMW 328i, followed by James Colborn and Seth Thomas in fifth sharing the No. 82 BimmerWorld BMW 328i.