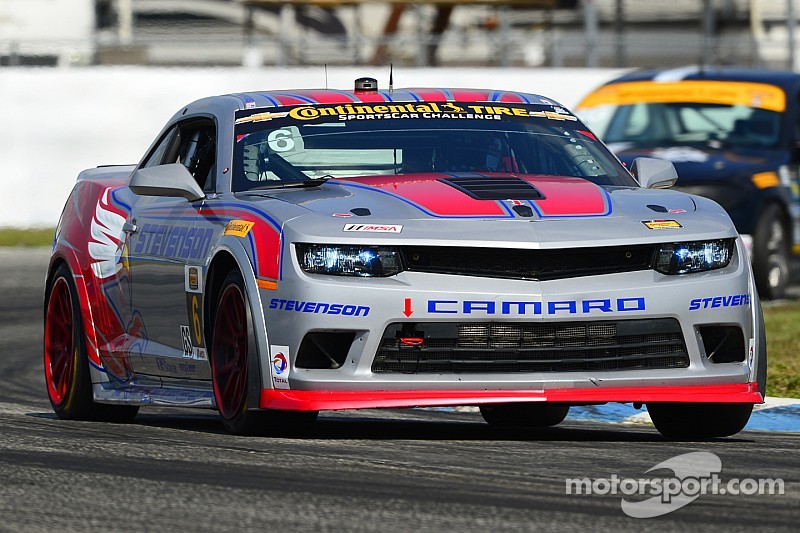 SEBRING, Fla. – Back at the scene of its first race victory, the Chevrolet Camaro Z/28.R claimed the first two starting spots Thursday for the Continental Tire SportsCar Series’ second round of 2015. Stevenson Motorsports’ Matt Bell in the No. 9 Camaro Z/28.R was the fastest Grand Sport (GS) qualifier with a lap of 2:15.846 (99.112 mph).

“Congratulations to Matt Bell, Andrew Davis and everyone at Stevenson Motorsports on today’s 1-2 qualifying effort in GS with the Camaro Z/28.R,” said Lisa Talarico, Chevrolet Program Manager for the Continental Tire SportsCar Challenge. “The high temperatures made the session extremely challenging, but our engineers along with those at Stevenson Motorsports did a great job of maximizing the performance of the Camaro Z/28.R and minimizing the use of the Continental tires. We will need more of the same in Friday’s race.”

Davis and Robin Liddell won last year at Sebring for the Camaro Z/28.R’s first victory, and the two are paired again this season. On Wednesday, Bell and teammate Lawson Aschenbach were quickest in the two practice sessions in steamy conditions that will remain Friday.

Stevenson Motorsports’ two Camaro Z/28.Rs opened the season with a second- and third-place showing at Daytona International Speedway in January.

The second round of the 2015 Continental Tire SportsCar Challenge is set for 1:05 p.m. ET on Friday from Sebring International Raceway. Live coverage will be available at IMSA.com with TV coverage set for 9 a.m. ET Sunday, April 5 on FOX Sports 1.

This continues a strong showing for the no. 9 Camaro Z/28.R. talk about qualifying.

“A huge thanks to Team Chevy and Stevenson Motorsports. These guys did a great job. They did their homework and made huge work of testing and practice. They made it a point to make sure we were out in every single session. They know how to keep ahead of things with the Camaro Z/28.R. The setup was exactly what I needed. They did a phenomenal job listening to Lawson and I, looking over data and making sure we did what we needed to do in qualifying. We did a mock qualifying runs to make sure the car had a proper setup on it for two laps. We spent the rest of the time trying to make our car last a full stint. This bumpy track is really rough on the tire. It’s a very abrasive track and a very slippery track. It can burn off the tire within a couple laps. We definitely made sure we were ahead of the game on that. It should be good for the race tomorrow. It’s obviously the best track position we could hope for.”

How good of a start is this as you and Robin go for a second straight win at Sebring?

“I’m really happy with the Stevenson Motorsports crew. It’s always nice to lock out the front row. It’s the first time we’ve done that the Camaro Z/28.Rs. It was a great lap by Matt, and the No. 9 crew has been really working hard to maximize their performance just as we have with our Camaro. I think we’re in good shape for the race and starting from the best seat in the house. Now we move into race mode. I’m just really thrilled.”

“We just need to put our heads down at the start. Matt and I need to drive smart, stay out of trouble and hand these cars to our teammates to go to the end. That will determine what happens from there. We need to maximize our performance but also save the cars as well. It’s going to be really hot, and tire wear will be at a premium. That’s what we’re going to focus on tomorrow.”

How was qualifying for you?

“A top-10 qualifying effort is my first. I just love this track and this Camaro Z/28.R The Mantella Autosport guys have the car set up unbelievably. It’s ready to race, and they made it easy for me. I can’t wait to get back out here tomorrow. My two flying laps were one-tenth (of a second) within each other. The hardest part of me was telling myself to go do it. Up until now, it took me five or six laps (to get a good lap). I’m really excited for myself, for the team and to park the car.”