2011 IMSA GT3 CUP CHALLENGE BY YOKOHAMA GETS UNDERWAY AT SEBRING 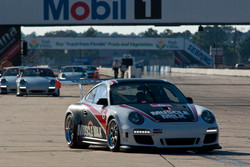 SEBRING, Fl. (March 17, 2011) – The seventh season of the IMSA GT3 Cup Challenge by Yokohama gets underway at Sebring as new teams and drivers with impressive racing resumes enter the series, trying to unseat established veterans and favorites for the two class championships. For some, the goal is to move up the sports car ladder. But for others, the series is an end in itself, a chance to run in a professional series alongside the American Le Mans Series presented by Tequila Patrón.

The IMSA GT3 Cup Challenge by Yokohama is the largest single-make racing series in North America, with over 40 cars entered at Sebring. Powered by one of the world’s most successful race cars, the Porsche 911 GT3 Cup car, the series is divided into two classes; the Platinum Cup, featuring the more powerful 2011 and 2010 Porsche 911 GT3 Cup cars, and the Gold Cup, which includes 2005½ - 2009 versions. The power unit featured in the 911 GT3 Cup car is very similar to the production engine of the 911 GT3 RS, with the same horsepower (450) and the same maximum engine speed (8,500 rpm). Both classes race on environmentally-focused Yokohama ADVAN ENV-R2 racing tires.

Entering the series in 2011 are two of the biggest names in sports car racing; NASCAR and sports car standout The Racer’s Group (TRG) enters the Platinum Cup with Jim Norman and Randy Oswald and Greg Pickett’s Muscle Milk Team Cytosport, also in the Platinum Cup class with German Mark Bullitt behind the wheel. Pickett’s ALMS team finished second in the LMP2 championship but switched from Porsche to Aston Martin for 2011 – Pickett hopes the expansion to GT3 keeps the Porsche lines of communication open.

“We’ve been looking to expand our presence in the motorsports arena because we want to keep growing and building our team,” said Pickett. “At the same time, it was important to us to keep a partnership with Porsche, so when this opportunity came about with Mark, it was the perfect scenario. Mark has a lot of racing experience but he has never really competed full-time in a pro- Fissional series like the IMSA GT3 Cup Challenge. This series is the ideal place for him to test his skills, to gain as much experience and knowledge as possible.”

Returning veterans aim for the championship

Added to that mix just before the winter test in February was 2009 Gold Cup champion Melanie Snow, returning to the series full time behind the wheel of a new 2011 Platinum Cup car. The Utah resident has had only one other brand new car, back in 2007 – and she doesn’t care to repeat that particular experience.

“My only other new car was a 2007 – and it was totaled on the front straight in a massive pile-up in the rain in the first race at Sebring.” recounts Snow. “The water had nowhere to go – the car in front of me hydroplaned and went sideways, I hit him then all the cars behind me hit me. That was my very first brand new car, so I’m not doing that again!”

“It was a fairly big adjustment for me, going from a 1300 lb formula car with a lot of downforce to a 2600 lb closed wheel car with much less downforce. It took me a few race weekends to get up to pace. So the third event at Utah was definitely a season highlight, finishing with two second places. The weekend went very smoothly and it was where we finally showed we had the pace to run at the front.” Michael Schein, from Glen Cove, New York, drove for Alex Job Racing in Historic Sportscar Racing and Porsche Club of America events before joining the IMSA GT3 Cup Challenge last year at the second event in Monterey. Despite missing the season opener at Sebring, Schein finished sixth in the title chase, earning a podium finish in his fifth race in Utah and winning at Mid-Ohio. Obviously, the timing of the move was just right.

“After spending a solid year club racing I felt that it was time to join a structured race series,” said Schein. “For me to advance my skills, I needed to be in a situation that was outside of my comfort zone and would force me to learn at a rapid pace in order to be successful. The GT3 series was just that.

“My biggest concern was learning all the tracks - I had driven only one of them previously (Road America), so I had to go out and learn each one. But this year, it will certainly be an advantage returning to tracks that I am now familiar with!”

Venezuelan Henrique Cisneros was also part of that stellar 2010 rookie class, with brothers Andres and Eduardo. But the 2010 Gold Cup class champion decided to take on the larger pack, trading in his 2009 version for a 2011 Porsche 911 GT3 Cup car in the Platinum Cup class.

“It will be exciting to be in the top class,” said Cisneros, “to be able to drive up front in my own class and not worry about other traffic! Last year, it got a little bit mixed in the middle between the Platinum and Gold cars. So this year, I’ll be able to improve on racing against people in my class. And Platinum has really grown, almost double this year compared to last, so it should be competitive.

“When the 2010 was tested last year against the 2009 it was consistently four seconds faster. So that’s my target at Sebring - last year I did a 2:10, so I’m looking for the 2:06 range. For me, that will be a big deal, to go around Sebring that fast.

And there are a lot of fast guys out there who have more time in the car, so I’ll be looking for a lot of seat time at the winter test!” Cisneros will get all the seat time he can handle at Sebring, as he and teammate Carlos Kauffmann have entered the GTC class in the American Le Mans Series for the three endurance races this season – Sebring, Monterey and Petit Le Mans at Road Atlanta. Going from 45 minutes to races up to 12 hours will be a big step.

“I’m sure it will be a shock! After a 45 minute race, I would be exhausted - and a regular shift in the ALMS series is double that. But I’ve been training very hard and am getting in shape, so I can withstand the endurance racing, which is very physically demanding. “Last year was my first year, so I had to learn every track, learn how to drive the car, how to be safe in it and learn how to keep my emotions under control. After winning the championship, I can focus on being more aggressive and just push my driving ability more, because I’m a lot more comfortable in the car.”

Jay Policastro and his father Joe have 43 years of racing experience between them, with Jay winning the first IMSA GT3 Cup Challenge in 2005. The Latrobe, Pennsylvania native has made the GT3 Cup Challenge his home since that first season, but has only been able to commit to a few events a season. But for the first time since 2005 (when the entire campaign was only five races), Jay and his father have committed to the entire GT3 Cup season. They’ve also bought two brand new 2011 Porsche GT3 Cup cars, joining Cisneros in the jump from Gold Cup class to Platinum. Given their long history with Porsche, the Policastros can’t wait to try out their new toys.

“My Dad and I have been racing sports cars for 20 years,” said Policastro. “We did a tremendous amount of endurance racing, which is how we got hooked up with Porsche - I think we bought our first factory car in 1999. We really enjoyed the format of the GT3 Cup series, whether it was in Europe or here. It’s a great formula; you can buy a box racecar that’s pretty competitive and be ready to go right out of the gate. Porsche does a great job of support– we can buy everything we need right off the truck to go with what we carry with us. The appeal is just a simpler formula; with two 45-minute races, practice and qualifying, we get plenty of track time, it’s a lot of fun and a much simpler equation.”

“The last few years, we ran Gold Cup cars -we had to drive really hard just to finish in the middle. We’re really looking forward to running brand new 2011 cars and to being more competitive. The additional horsepower, the wider stance in the footprint, it’s really exciting. Since the cars are very equal, we feel really good going in that all the laps will pay off when we get into cars that are on a more equal footing.

“So we’re really looking forward to Sebring in a really competitive car – that’s the first step. After we get some time behind the wheel of the new hotrods, we need to get back onto the podium!”