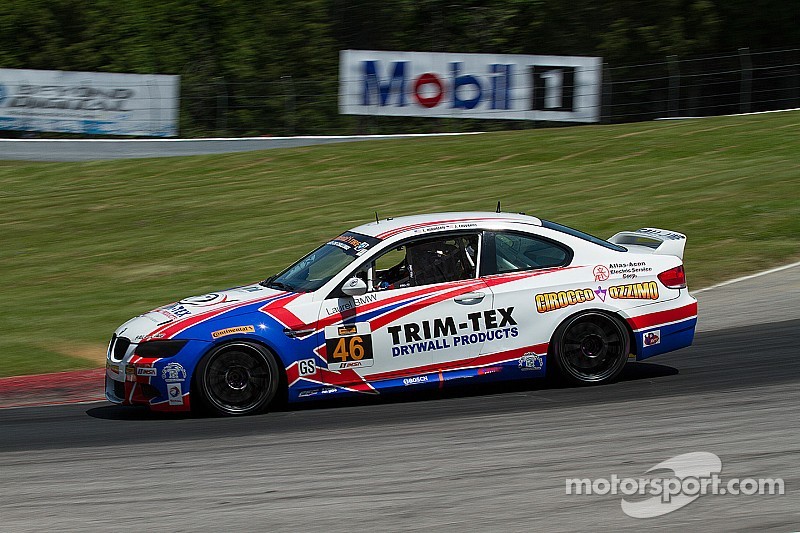 But the points battle remains too close to call.

With four races remaining, their leads are far from comfortable, though. Just look at what happened on the very first lap of the most recent race at Indianapolis Motor Speedway: Kris Wilson had his No. 7 TRG-AMR Aston Martin Vantage badly damaged in a Turn 1 incident. Seconds later, Matt Plumb’s No. 13 Rum Bum Racing Porsche 911 erupted in smoke – putting two championship contenders on the sidelines before they even got a chance to drive.

Despite a two-race midseason slump, Hindman is back in control with a 15-point lead (214-199) over John Edwards – his co-driver of the Fall-Line Motorsports BMW M3 – and Stevenson Motorsports drivers Andrew Davis and Robin Liddell, who scored their third GS victory of the season at Indy in the No. 6 Chevrolet Camaro Z/28.R. Wilson, who was challenging for the points lead following a victory at Kansas Speedway, managed to get back out on track at Indy to salvage 20th-place points, but now has three straight finishes of 13th or worse to fall 24 points behind Hindman with 180.

Plumb, who was tied for the lead after Watkins Glen in quest of a third consecutive team title, scored zero points at Indy and is now tied with BJ Zacharias for sixth with 176 points. Brad Jaeger, who co-drives the No. 14 Doran Racing Nissan 370Z, is fifth with 179 points, the result of scoring three points at Daytona while his car went out before Zacharias recorded the required 45 minutes needed to score points.

Both Hindman and Foss are in position to score solo championships. Edwards pitted the Fall-Line BMW M3 less than one minute shy of the required 45 minutes at Kansas, while Jeff Mosing missed the race at Mazda Raceway Laguna Seca due to painful back spasms suffered the night before the race. As a result, Foss leads ST by six points over Wayne Nonnamaker (206-200), with Mosing third with 195 points. Foss and Mosing may have a new car this weekend.

Murillo Racing is contemplating renumbering the team’s new Porsche Cayman as the No. 56 Mosing Motorcars entry, in which case their usual BMW 328i will be renumbered No. 65 for drivers Brent Mosing and Tim Probst. Nonnamaker joins his brother Will in the No. 42 Team Sahlen’s Porsche Cayman. The pair finished second in three of the four most recent races – although Will drove less than 45 minutes in two of them.

ST is tight, too

Tyler Cooke and Greg Liefooghe have been in the thick of the ST battle since opening the year by finishing second in the No. 81 BimmerWorld BMW 328i. They are currently fourth in the championship with 186 points, followed by defending ST champions Terry Borcheller and Mike LaMarra in the No. 23 Burton Racing BMW 128i with 174 points.

Drivers farther back in the points but contenders for victory include Stevan McAleer and Chad McCumbee in the No. 5 CJ Wilson Racing Mazda MX-5; Andrew Carbonell and Randy Pobst, who won two races early this season in the No. 26 Freedom Autosport Mazda MX-5; Remo Ruscitti and Adam Isman, who won at Canadian Tire Motorsport Park in the No. 04 Autometrics Motorsports Porsche Cayman; and Indianapolis winners Cody Ellsworth and Corey Lewis in the No. 50 Berg Racing REDCOM Porsche.