Young talent Colin Thompson, who joined Kelly-Moss this season, finished second in both rounds of competition at Sebring International Raceway.

SEBRING, Fla. -- Kelly-Moss Motorsports began its 2014 Porsche GT3 Cup Challenge USA by Yokohama season with a powerful statement on March 13-14 during the Mobil 1 Twelve Hours of Sebring Fueled by Fresh from Florida.

Young talent Colin Thompson, who joined Kelly-Moss this season, finished second in both rounds of competition, after starting seventh and fourth on the grid, respectively, at Sebring International Raceway. 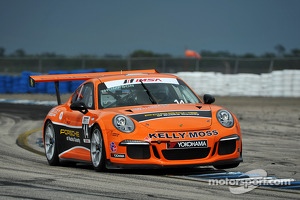 "Colin showed not only that he has the speed to get the job done, but he has the maturity to race clean with the patience to show true race craft," Kelly-Moss racing director/vice president Jeff Stone said.

"I talk to Colin as little as possible on the radio so he can stay in his zone, but when I say "think championship" it is clear by watching him that he is doing just that. I really believe Colin has a great future in racing and we are happy to be a part of his bright future."

Thompson's teammates Bill Peluchiwski and David Ducote both scored podium positions in their respective classes in Round 1 on March 13.

Peluchiwski, who drives the No. 74 Kelly-Moss Porsche 911 Gold Cup car, claimed victory in the Gold Cup Masters class when he avoided an incident between the class leaders on the final lap.

"The race started pretty well for me, and I was able to capitalize on some moments when there was bad behavior in front of me," Peluchiwski said. "Kelly-Moss put together a great car for me. Overall, the entire weekend was great. I think the event was well planned. It had the right atmosphere around it, and I was pleased with how it was organized."

In Race 1, Ducote took the checkered in seventh overall and second in Masters Platinum Cup competition.

"The race was great," Ducote said. "I was just trying to be consistent, clean and mistake-free. We never had a yellow, so I was able to conserve the tires a bit. Kelly-Moss did a great job preparing the cars. There were no real incidents, and all of the equipment was in great shape."

Masters Platinum cup driver Dan Weyland placed 17th and 18th, respectively, in his class in two races. As Weyland looks to progress his pace throughout the season, he was pleased with the overall feel of the new 2014 Porsche 911 GT3 Cup car.

"This was my first weekend in the new car, and I really thought the car was consistent," Weyland said. "I had a little gearbox problem in Race 2, but overall I think the quality of racing in these first two races of the season was great. As competitive as it is and with as many cars as we have out there, it speaks really well for the series. The Kelly-Moss team was really on it, and I'm proud to be with them."

Wayne Ducote finished just shy of the podium in the Gold Cup Masters class, placing fourth in Race 1 and sixth in Race 2.

Said Stone: "All of our drivers came together quickly and their personalities work well together - it's a real team under the Kelly-Moss tents. My hat is off to all the other staff and they all deserve credit for the success we had this week. Our engineers, Chiel Bos and Patrick Van der Groot are great, driver coaches Andrew Davis, David Donohue, Chris Hall and Jeroen Bleekemolen. There are no egos, they just work as a team should."

There also was exciting news for Kelly-Moss off the track. Driver Seth Davidow rushed home to Texas before racing began at Sebring when his wife Marni went into labor. Davidow arrived in time to witness the birth at 8:18 a.m. Thursday, March 13 of his first-born daughter, Joelle Carlin Davidow.

The next two rounds of Porsche GT3 Cup USA competition kick off on May 3-4 at Mazda Raceway Laguna Seca.

Stoner takes his first pole of 2012 at Estoril