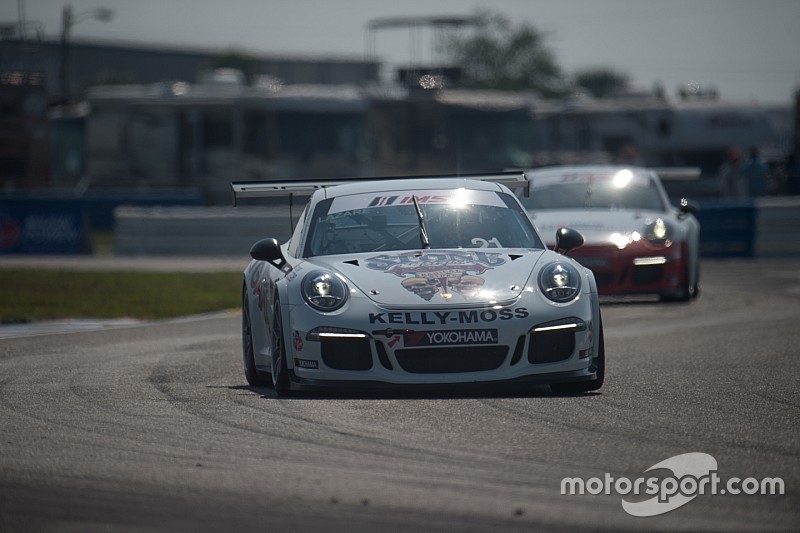 A new era dawned for Jesse Lazare just 30 minutes after the sun dropped behind the Texas horizon Friday at Circuit of the Americas. He is a Porsche GT3 Cup Challenge USA by Yokohama champion.

Lazare, 19, from Montreal, clinched the Platinum Cup title with a victory in Round 14 in the No. 21 Kelly-Moss Road and Race Porsche. It was the only night race of the season. Third-year series driver Lazare leads Lucas Catania by 54 points, 253-199, with just 40 points available in the final two rounds of the season Sept. 28-30 at Road Atlanta.

"I can't describe them," Lazare said of his emotions. "This is such a great feeling because I didn't do this by myself. There were so many factors that took place for me, having an outcome like this. Kelly-Moss, every crew member has been just outstanding. I'm so fortunate to get to work with them for the last two years."

Lazare earned his series-record 11th Platinum Cup victory of the season and has won six consecutive races.  The previous record for Platinum Cup wins in a season was nine by Bob Faieta in 2008 and Ross Smith in 2010.

2016 Ultra 94 Porsche GT3 Cup Challenge Canada by Yokohama Platinum Cup champion Daniel Morad, from Toronto, recorded his second runner-up finish of the weekend in the No. 17 Porsche Centre Oakville/Alegra Motorsports Porsche. He ended up .919 of a second behind Lazare. Will Hardeman, from Austin, Texas, completed a dream week at his home track with his second consecutive third-place finish in the No. 19 Moorespeed Porsche. The podium finishes were his first in the International Motor Sports Association (IMSA)-sanctioned Single-Make Series.

Morad started from the pole, but Lazare wasted no time moving to the front. Morad went wide in Turn 2 to avoid contact with other cars, and Lazare swooped past to take the lead. Lazare never trailed thereafter. He gradually pulled away from Morad, building a 1.118-second lead at the halfway point of the 45-minute race. That lead grew to 3.075 seconds with two minutes remaining on the 20-turn, 3.4-mile circuit.

Morad, 26, closed to within 1.986 seconds of Lazare at the white flag and sliced another second off the lead on the final lap. But it wasn't enough to catch his fellow young Canadian star. "I had to do a little accident avoidance," Morad said of his off-track excursion on the first lap.

"In the end, that kind of cost us the race because Jesse and I were so even for lap time the whole way through. In the middle of the race, he pulled a little gap, but it seemed like his tires fell off at the end, and we started to catch him. We got the gap down to next to nothing there at the end. But my Alegra Motorsports team gave me a great car. We rebounded from yesterday and made great changes to come back today. It just fell a little bit short."