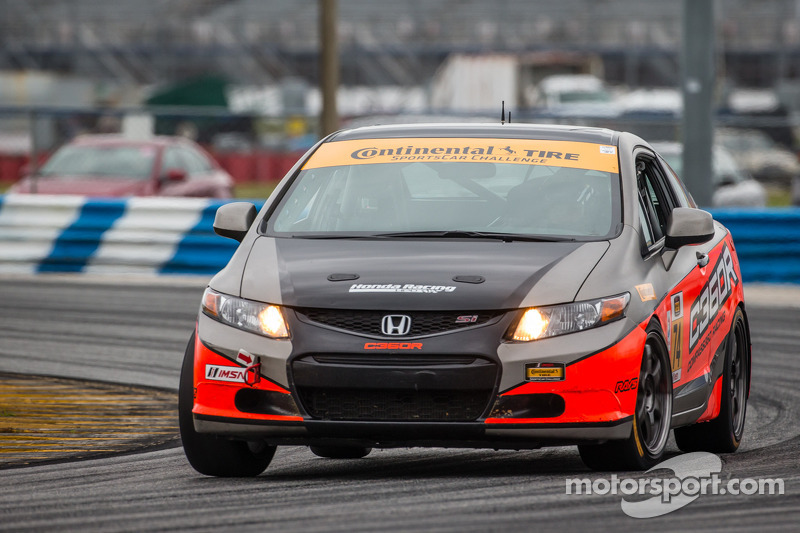 James Vance made the Compass360 Racing team proud with his second place finish after starting deep in the field.

STOUFFVILLE, Ontario (May 6, 2014)- James Vance drove his Compass360 Racing No. 74 Honda Civic Si from 22nd to second in the Continental Tire SportsCar Challenge race May 3 at Mazda Raceway Laguna Seca before the team finished 21st due to an on-track incident.

Pushing himself through the field has become a signature move for Vance. After taking his first stab at qualifying during the Continental Tire Monterey Grand Prix Powered by Mazda weekend, Vance started 22nd in the ST class, farther back than hoped for his first round with his new team.

But Vance gained position through his 90-minute stint even after receiving contact from surrounding competitors. Throughout the race, Vance found himself dodging mayhem on track as multiple incidents and yellow flags plagued the race.

Vance kept the car clean and brought it to the pits for teammate Jon Miller's stint. The mayhem caught up with Miller, as he was hit in Turn 9 and knocked to the rear of the field before finishing 21st.

"My stint was all a struggle," Vance said. "From probably Lap 5 onward to the first yellow, I developed a bad push on the car and managing that for myself was pretty cool. Jon Miller did a great job, had a little bad luck in the end. The whole team did a great job this weekend. I can't say enough about them. A really, really, truly great job, and I enjoyed myself.

"The car wasn't quite as strong as I think we would have liked it to be. It wasn't easy, by any means. But we had a solid stint. Our strategy wasn't quite up to par, either, but I think for the first time for the No. 74 car to finish the race on the lead lap is definitely a positive to take from this. And it was also a first. There were a lot of firsts for me and for my teammate, like getting used to each other.

"It's the worst track for the Hondas. I think coming into it, I should have found more time to get in the front-wheel-drive car beforehand, rather than jumping into the race weekend and going for it. Now it's all taken care of, and I think the next race we will be better off and hit the ground running."

The next stop for Vance and the Continental Tire SportsCar Challenge is an event May 23-24 at Lime Rock Park in Lakeville, Connecticut.