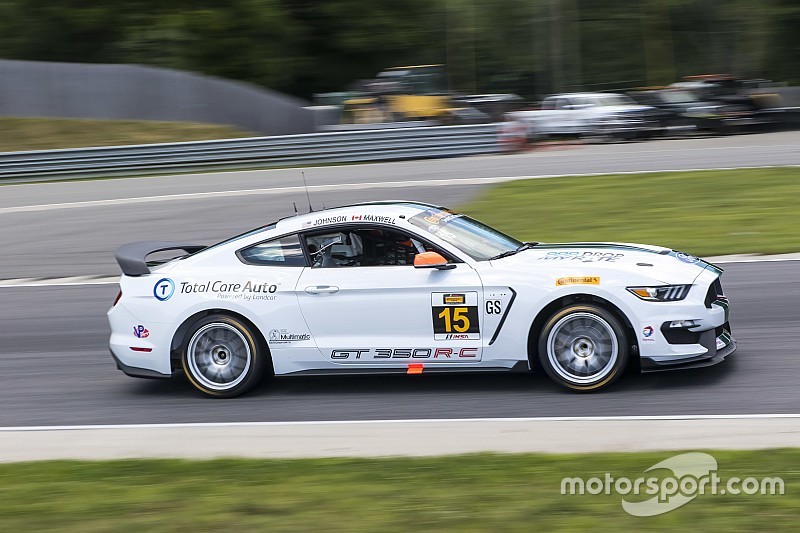 LIME ROCK, Connecticut – Talk about the highs and lows of automobile racing – the Multimatic Motorsports team of Scott Maxwell and Billy Johnson have seen it, all wrapped up into two races.

The last race, at Canadian Tire Motorsport Park, which is the Canada-based Multimatic team’s home track, Maxwell was behind the wheel and crashed hard, essentially totaling their new Ford Shelby Mustang GT350R-C.

But in today’s race, the Northeast Grand Prix at the 1.5-mile Lime Rock Park, Maxwell and Johnson took the overall win and the Grand Sport class victory in the two-hour Continental Tire SportsCar Challenge race, crossing the finish line 3.247 seconds ahead of Jade Buford and Austin Cindric, driving a Multimatic team Shelby Mustang.

Buford and Cindric won at the Canadian Tire Motorsport Park, giving Multimatic two in a row.

“It’s been an up and down season for Billy and me,” Maxwell said. Today’s race wasn’t easy, one reason being the less powerful Street Tuner cars are easier on tires than the Grand Sport cars, “and within 20 or 30 minutes, they are as fast or faster than we are on some of the corners,” Maxwell said.

Consequently, passing required patience. “I just tried to avoid conflict, and give Billy a good car” to finish the race in.

Third was Brad Jaeger and B.J. Zacharias in the No. 14 Nissan 370Z, and fourth was Robin Liddell and Andrew Davis in the No. 6 Chevrolet Camaro Z/28.R.

In the Street Tuner class, it was another win for a Mazda MX-5, this time the No. 5 car driven by Chad McCumbee, who qualified the car on the pole, and Stevan McAleer. The win also put the team, C.J. Wilson Racing, owned by the major league baseball pitcher, in the Street Tuner points lead.

“With two wins this year,” McAleer said, “we have a lot of momentum. I hope we can take it to Road America,” which is the next race on the Continental Tire schedule.

Second was Eric Foss and Jeff Mosing in the No. 56 Porsche Cayman, followed by Spencer Pumpelly and Luis Rodriguez, Jr., in another Porsche Cayman. That duo won their class at the last race at CTMP.
Twelve cars entered in the GS class, and 29 in the ST class, with 39 cars starting the race.