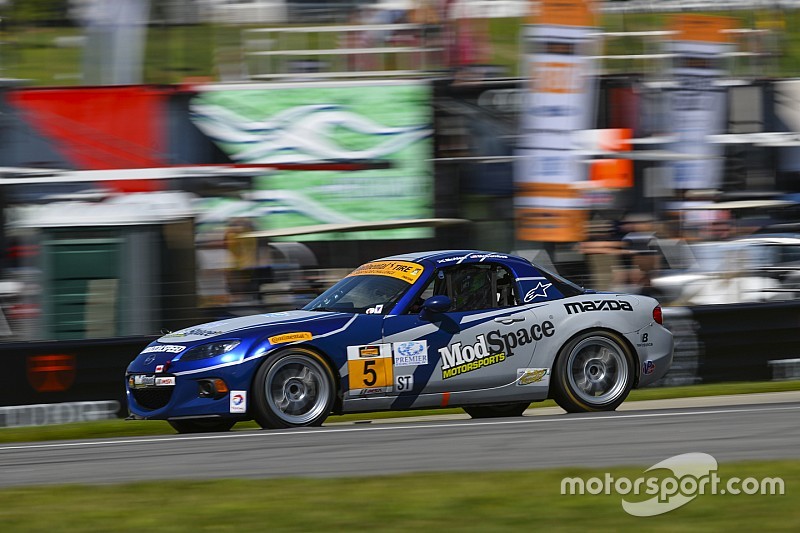 LIME ROCK, Connecticut – In 2004, Chad McCumbee’s racing career, which began at age 10 in karts, took a strange turn: He was cast as a young Dale Earnhardt, Jr. in the made-for-TV movie “3: The Dale Earnhardt Story.” The movie, described by the producer as an “unauthorized docudrama” about the late NASCAR driver, may not have made Chad McCumbee a household name, but it definitely didn’t hurt his racing career.

And then his racing career took another turn – a turn that involves steering left and right. McCumbee drives the No. 5 ModSpace Mazda MX-5 for C.J. Wilson Racing, a team owned by the major league baseball pitcher, in the Continental Tire Sports Car Challenge series.

Friday, McCumbee qualified that Mazda, which he shares with co-driver Stevan McAleer, on the pole of the Street Tuner class for Saturday’s Northeast Grand Prix race at Lime Rock Park. McCumbee’s fastest lap was 58.806 seconds, a track record for the class. Second was another Mazda, the No. 34 car of Justin Piscitell, who was .568 seconds back.

In the Grand Sport class, Matt Bell had the fastest lap of 57.654 seconds in the No. 9 Stevenson Motorsports Chevrolet Camaro Z/28.R to take his third pole of the season. Bell and co-driver Lawson Aschenbach have been fast all season, but are still looking for their first win.

Second in GS qualifying was Hugh Plumb, who had a best lap of 57.755 seconds in the No. 13 RumBum Porsce 911. His co-driver is his brother Matt, last year’s GS winner at Lime Rock. Andrew Davis was third in the No. 6 Stevenson Motorsports Chevrolet Camaro Z/28.R, a sister car to Bell’s polesitting car.
Saturday’s two-hour combined race for the GS and ST classes will take the green flag at 10 a.m. ET, and will be streamed live on IMSA.com.

What do they have in common? They are both from South Africa, and they are both rooting for the other – easy, since they are in two separate classes. The South African racing community in the U.S. is a small one, “and it would be really cool if we could both win tomorrow,” Simpson said.

The TUDOR Championship race starts at 3:15 p.m. ET. IMSA.com and the IMSA app will stream in-car cameras, live timing and scoring, and IMSA Radio’s play-by-play. The race will be aired on FOX Sports 1 on Sunday, July 26, from 5-7:30 p.m. ET.

LIME ROCK REDUX: The 1.5-mile track opened in 1957, and has hosted some of the best sports car racing in the U.S. since. Lime Rock was the site of the 2013 season finale for the Grand-Am series, and indeed, it was the last Grand-Am race ever, as the series merged that winter with the American Le Mans Series to debut in January of 2014 at the Rolex 24 at Daytona as the TUDOR United Sports Car Championship.

Lime Rock was missing from the TUDOR Championship schedule in 2014, but it’s back for 2015, and the competitors are happy to be back. “Lime Rock is always a special place for me. Having grown up in New England, it’s my home track,” said Matt Plumb, co-driver of the RumBum Porsche.
The track is owned by former racer Skip Barber, better known as the founder of the internationally known Skip Barber Racing School.