Morad and Hargrove to continue their championship battle at CTMP 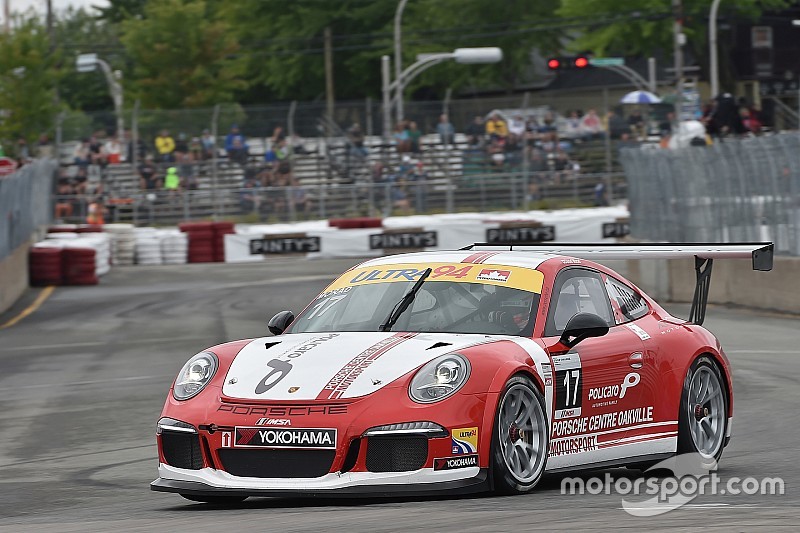 Daniel Morad could play it safe during the Ultra 94 Porsche GT3 Cup Challenge Canada by Yokohama season finale Sept. 2-4 and walk away with the Platinum Cup championship.

But taking it easy isn't Morad's style. So that - and two other title races to be decided - should guarantee excitement at Canadian Tire Motorsport Park (CTMP) for Rounds 11 and 12 of the International Motor Sports Association (IMSA)-sanctioned Single-Make Series.

Morad and Hargrove have finished in the top three positions in some combination in seven of the 10 rounds this season. The scoring system awards 20 points for a win, 18 points for second and 16 points for third, so Morad could finish on the podium in both races behind Hargrove and still claim the title.

But the rivalry between young Canadian stars Morad and Hargrove has been tight and, at times, combustible this season.

Hargrove, from Tsawwassen, British Columbia, leads the series with five victories in the No. 28 OpenRoad Racing Porsche. But three finishes off the podium have dented his hopes for a second championship.

Morad has four victories in the No. 17 Porsche Centre Oakville/Alegra Motorsports Porsche this season. He has finished on the podium in nine of 10 races this season, with that consistency giving him the edge over Hargrove.

But Morad is a hard charger, not a point’s racer. He strives to lead the time charts in practice, qualifying and the race. And both he and Hargrove haven't yielded a centimeter in their fight for the title across Ontario, Quebec and New York this summer.

That has resulted in a few flashpoints and contact between the two drivers this season. The first incident occurred during the early seconds of Round 2 of the season-opening Victoria Day Weekend event May 20-22 at CTMP.

Hargrove started from pole, with Round 1 winner Morad at his side. Hargrove and Morad made light side-by-side contact entering Turn 1 after the green flag, with Morad passing Hargrove for the lead.

Hargrove took a wide line into Turn 2, trying to make an outside pass of Morad. The two cars made contact again, and then the front of Hargrove's car made harder contact with the rear of Morad's No. 17 Porsche Centre Oakville/Alegra Motorsports entry.

Morad spun into the barrier in Turn 3. The front end of Hargrove's car was heavily damaged. Both drivers returned to the pits, their respective races over, with rookie Zach Robichon taking the win in his No. 78 Mark Motors Racing Porsche.

That set a tone for tight, ultra-competitive racing all summer.

Hargrove pulled to within one point of Morad, 155-154, after winning Round 9 on Aug. 11 at the Grand Prix de Trois-Rivières in Trois-Rivières, Quebec. Hargrove dove underneath Morad entering Turn 6 on the second lap, with both cars making contact and wobbling on the edges of control. Hargrove was able to press the throttle earlier and took the lead for good.

But Morad padded his lead to 13 points after winning Round 10 the next day at GP3R, with Hargrove losing ground and points due to damage suffered after hitting a lapped car while trying to chase leader Morad.

So history shows to expect drama and the unexpected in the final two chapters of this compelling Platinum Cup championship story.