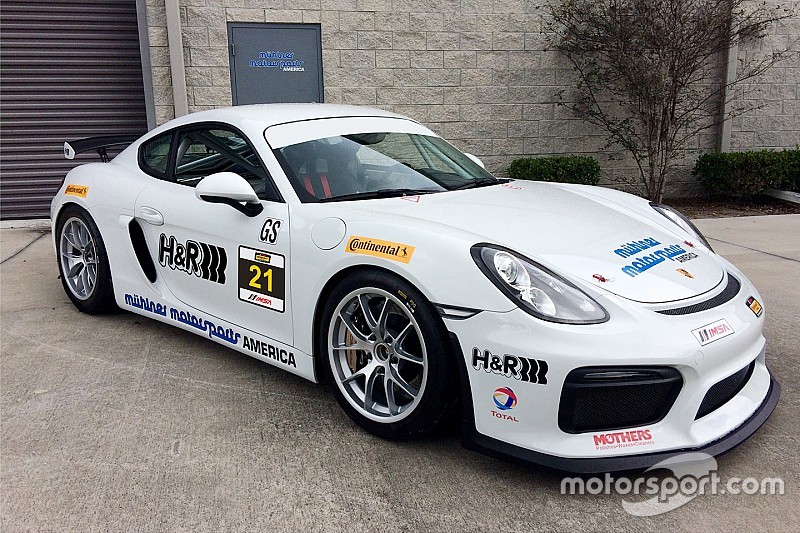 With the recent introduction of the 2016 Porsche Cayman GT4 Clubsport, Muehlner Motorsports America is excited to announce a new chapter and has entered the IMSA Continental Tire SportsCar Challenge with the newest Porsche Motorsport developed and built race car. The Porsche Cayman GT4 Clubsport is the perfect platform for competing in the Grand Sport (GS) class, allowing for certain modifications for the top level production-based racing in the Continental Tire SportsCar Challenge.

One area of modification key to the 2016 campaign will involve suspension components, which highlights the longtime partnership of H&R Special Springs and the engineers at Muehlner Motorsports America. Not only does H&R offer state of the art dampers and springs, but the German Lennestadt based company has Anti Roll Bars for the team to work with for this season.

“In Europe, we have worked with H&R for over 25 years, and with the past 6 years in the US, we never trusted anything else but H&R Springs. Their ‘Made in Germany’ quality is very important to us because suspension parts are so relevant for a safe and reliable race car, an area I would never take a risk. Whether it is Eau-Rouge at the Belgian F1 circuit Spa-Francorchamps, the “Fuchsrӧhre” at Green Hell called Nurburgring Nordschleife, or the high banking of Daytona International Speedway, we trust only in H&R Special Springs,” explains Bernhard Muehlner, Managing Director and lead engineer at Muehlner Motorsports America and Mühlner Motorsport in Europe.

Muehlner Motorsports America’s sportive expectations are high through hard work, striving for race wins and to be a serious contender for the championship. The IMSA 2016 Continental Tire SportsCar Challenge is right around the corner, starting in January with the Roar Test at Muehlner Motorsports America’s home track, the newly renovated Daytona International Speedway. The season continues throughout the year at premier tracks including Sebring, Mazda Raceway Laguna Seca, Watkins Glen, Canadian Tire Motorsports Park, Lime Rock, Road America, Virginia International Raceway, the Circuit of the Americas and finishing at Road Atlanta. The driver line-up will be announced shortly.