One Motorsports is taking on a new challenge by joining the prototype lites ranks.

Jeff Shafer and John Falb stood in the paddock Monday evening, Feb. 24 at Sebring International Raceway , wondering if they had taken too large of a leap.

One Motorsports owner Shafer and drivers Falb, Tony Bullock, Todd Slusher and Lee Alexander decided in December to climb from SCCA and Radical sports car competition to the IMSA Cooper Tires Prototype Lites Powered by Mazda in 2014. The team worked night and day to build cars, prepare transporters, assemble spare parts stores and perform the myriad other tasks of constructing a race team for a season of intense competition.

Colin Braun, left, assists John Falb of One Motorsports at Sebring test.But there was a problem at sunset that Monday night in Sebring. Falb was One's leading driver on the speed charts but still was far off the leading pace, 18th quickest out of 22 cars.

"When we looked at the time sheet, we thought: 'Whoa, what are we missing? Are we missing a cylinder in the engine?'" Shafer said with a laugh.

Those fears were eased the next day when Falb ended up seventh overall at the two-day test, running among series heavyweights 8Star Motorsports, Performance Tech, JDC Motorsports and Ferrari of Houston. One Motorsports' second car had climbed to 14th on the speed chart.

The next big step in the evolution of One Motorsports will take place March 12-14 at the first event of the 2014 Cooper Tires Prototype Lites Powered by Mazda season during the Mobil 1 Twelve Hours of Sebring Fueled by Fresh From Florida at Sebring International Raceway.

Falb and Bullock will drive the team's two entries at Sebring. A third entry for Slusher will be ready for the Kansas Speedway round in early June, and plans for a fourth entry for Alexander this summer are in motion.

One Motorsports may be a new team to the Cooper Tires Prototype Lites Powered by Mazda series, but the team is steeped in experience and winning pedigree.

Shafer drove in open-wheel competition in the United States and Europe during the 1990s in series such as Skip Barber, U.S. F2000, Formula Atlantic and Formula Palmer Audi. Then he turned to team management and ownership and also runs a thriving racing products and services company, Factory48 Motorsports, based in Las Vegas.

Factory48 achieved success in SCCA and Radical competition, with Alexander winning the CSR national championship at the 2013 SCCA Runoffs at Road America.

But Shafer and drivers Falb, Bullock, Slusher and Alexander wanted more. They wanted to race at the next level. So they started to look at other series, and their attention continued to focus on Cooper Tires Prototype Lites Powered by Mazda. Discussions became more serious, and Shafer and his drivers decided in December to take the leap to IMSA's Development Series with a new team name, One Motorsports.

"I think these guys were looking for an opportunity to move to the next level of racing, and the Prototype Lites series provides that with similar style cars to what these guys were used to but at another level of competition and exposure," Shafer said. "That's what attracted them to it." 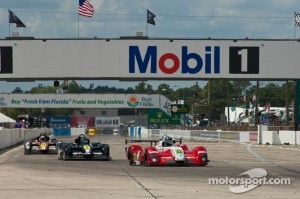 But the entire One Motorsports operation was under no delusions or illusions about the work before them. Many long nights in January and February, working under the glow and steady hum of lights in their Las Vegas shop, prepared the team for the cross-country trip for the Sebring test.

That journey was a thrash, too. Falb's car was brand-new, and the team picked it up at Elan near Road Atlanta. But the new machine needed final preparation work to be ready for track time at Sebring.

Shafer reached out to Kevin Kloepfer, team principal of Cooper Tires Prototype Lites Powered by Mazda veterans Comprent Motor Sports, for a hand. Comprent let One's crew use part of its shop in nearby Athens, Ga., to put the finishing touches on Falb's car, including installation of the paddle-shift system and data system.

"That was a lot of sleepless nights," Shafer said. "We rolled it off the truck (at Sebring), and we never even started the darn thing to see if it would work. Luckily, it all paid off, and the car ran really well."

That spirit of cooperation continued at the Sebring test. Shafer said he never found a closed door or pursed lips when he sought help or advice from rival teams in the paddock Feb. 24-25.

"One of the most surprising things to me was even though this is more serious racing than we've done in the past, all of the teams that I talked to offered more help than I thought they would," Shafer said. "Everybody was really friendly. Comprent, in particular, was more than generous in helping us out with information.

"That kind of surprised me because everybody works really hard for what information they have. That was really nice. That definitely helped us run better than we would have if we had not had anybody's help."

Quick adaptation to the 230-horsepower Mazda engine, Elan chassis and Cooper tires by One's drivers also flattened the learning curve almost overnight for the team at the Sebring test. But Shafer knows the hard work is only beginning as the team prepares to return to Sebring for its first race weekend in the series.

"I don't think it's going to be easy," Shafer said. "There are guys that are pretty darn quick. It's going to be really competitive, and it's a whole new level of challenge for the drivers and the team to put it all together.