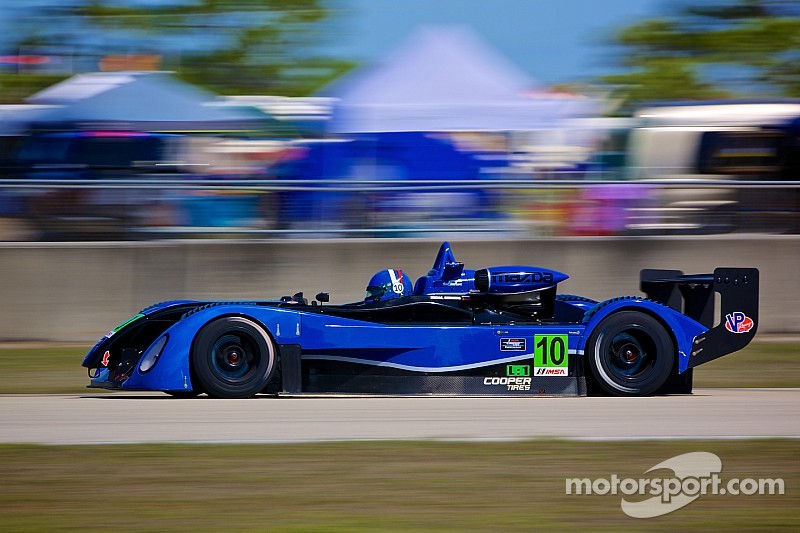 It's Novich's second pole of the season.

Andrew Novich of Comprent Motor Sports earned his second pole of the 2014 Cooper Tires Prototype Lites Powered by Mazda season Friday at Road America. He will start alongside of Michail Goikhberg (in photo) on the front row.

Novich, from Novato, California, will start on the inside of the front row in Round 9 of the International Motor Sports Association (IMSA) Development Series race Saturday, Aug. 9. He turned a top lap of 2 minutes, 5.662 seconds in his No. 61 Elan DP02 machine. Novich started from the pole position in June at Kansas Speedway and is on a quest for his first victory of the year in the Lites 1 class.

"Qualifying was awesome for us, obviously," Novich said. "We were lucky that I was able to get a tow from several drivers. These cars are equal, so you need every little bit of help you can get to edge out your competitors. (Mikhail) Goikhberg has been a rocket ship ever since Watkins Glen, and it feels like he's impossible to beat."

Championship leader Goikhberg, from North Vancouver, British Columbia, will start second Saturday in the No. 10 JDC Motorsports entry after a top qualifying lap of 2:05.953. Novich sits fifth in championship standings, 68 points behind Goikhberg.

"There are a lot of fast corners here, and moments where you wonder if you're going to make it through the corner," Novich said. "On the other hand, there's Turns 5 and 8 that are very technical and slow. Comprent Motor Sports did a great job setting up the No. 61 car. They gave me a car that was capable of going out and winning the pole, and I'm so happy we were able to execute today."

Hayden Duerson, from Gulfport, Mississippi, qualified third at 2:06.022 in the No. 39 Performance Tech Motorsports car. Christian Potolicchio, from Hallandale Beach, Florida, was fourth at 2:06.142 in the No. 2 8Star Motorsports entry. Richard Fant, from Houston, rounded out the top five and was the top Lites 1 Masters (drivers 40 and older) competitor at 2:06.293 in the No. 44 Ferrari of Houston Race Team car.

Las Vegas resident Todd Slusher of ONE Motorsports earned his first Lites 2 class pole position during the 20-minute qualifying session Friday. Slusher, driving the No. 62 car, turned a top lap of 2:09.829 on the 14-turn, 4.048-mile circuit at Road America.

"We had a bad start to qualifying today because my car actually broke on the way down to pre-grid," Slusher said. "The ONE Motorsports crew came down and took everything apart right away. They had the car fixed with 15 minutes left in qualifying, so I basically had four laps to go out and get the job done.

"My final lap was the best one because I had new tires. Once the tires were warm, I let some traffic around me so that I had clear track and wouldn't get in the way of anyone else's flying laps. I couldn't believe it when I looked down at my dash and got my best time of the whole weekend."