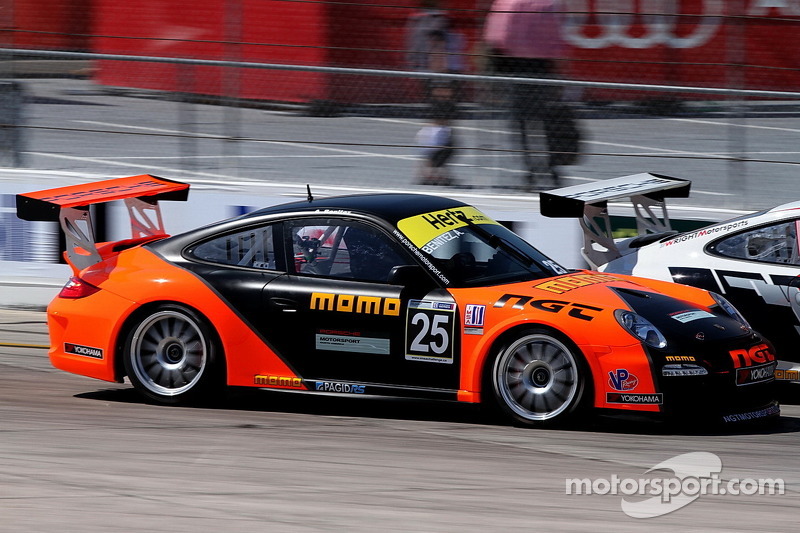 AUSTIN (Sept. 20, 2013) - To the tune of the city's motto "Keep Austin Weird", Race One at Circuit of the Americas (COTA) certainly was a "weird" one for the IMSA GT3 Cup Challenge by Yokohama Series. Rain pounded down on the COTA pavement for two hours prior to the start of the 45-minute sprint, and continued throughout the competition, but thanks to the track drainage system the race was completed. With such inclement conditions ahead of the participants, safety officials and race directors inspected the track and determined a start under caution would be best.

The race clock started when the field of 30 took the start/finish line after the prescribed pace lap. The Porsche Panamera safety vehicle stayed out to lead the Porsche 911 GT3 Cup race cars around the 3.4-mile, 20-turn circuit two more times for a single-file green flag start. Drivers young and old managed the Yokohama rain tires for 15 total laps in their first contest of the International Sports Car Weekend.

As the field went green, NGT Motorsport's Angel Benitez Jr. made a move immediately. He took Turn 1 with confidence, passing both polesitter Madison Snow and Michael Mills in one full sweep for the lead. By the time Benitez Jr. made it to Turn 11, the track was under a full course caution as a result of David Baker running off track into the gravel of Turn 2. The rescue crew worked hard to quickly and efficiently remove Baker's No. 56 entry from the track in time for a green flag a few short minutes later.

A full lap after the restart Benitez Jr. began building his gap on Snow. Benitez turned his fastest time in Lap 7, which was good enough for a new race lap record at COTA. His time of 2:30.138 was nearly four tenths faster than the rest of the field. With his first win since Round 8 at Canadian Tire Motorsport Park, Benitez salvages his shot at winning the 2013 Platinum Cup championship.

"Finally back on the top of the podium," Benitez Jr. said. "Everything was perfect. Great weekend. It was a shame that we couldn't qualify but we're really happy to be here. The team NGT did an awesome job to put the setup on the job. The Porsche is so impressive. Tires, absolutely incredible. I didn't expect to be going that quick on this track so I think we did a great job and I think we're on the way to fight for a championship."

With a second place finish behind Bentiez, Snow of Snow Racing/Wright Motorsports improves his lead as the Platinum Cup points leader. Entering Round 14 of the season, Snow has racked up 206 points, slotting him 42 points ahead of second place Sloan Urry.

"The start of the race I was very loose, all over the place, hard to turn, lots of understeer," Snow said. "I was just trying to keep it on the track, having trouble there. Once it started to rain more and more I was going a lot faster and I was catching Benitez and that's what I was aiming for. I wanted it to keep raining it was great but my windshield was so foggy I couldn't see anything. And then when it went yellow I was kind of excited but kind of sad at the same time. I was catching him but at the same time I couldn't see so I was grabbing a rag to wipe my windshield. It looked like Brett Sandberg was doing the same thing."

Brett Sandberg of TruSpeed Autosport landed on the third step of the podium and propelled himself into fourth place in the Platinum Cup standings ahead of EFFORT Racing's Michael Mills.

"We actually took a little bit of a gamble in the setup and it ended up being really good," Sandberg said. "We did battle some fog halfway through luckily I had a rag in the car and was able to reach my hand up and clean the glass off. Overall it was a good race. We thought maybe we would have a little bit for Madison (Snow) at the end but I just couldn't get to him and then it went to yellow so overall it was a good run."

While Sandberg battled with the top of the pack, Mills had a hard fight with Colin Thompson of Thompson Racing throughout the majority of the race. Thompson ultimately prevailed, but the battle between the No. 14 and No. 41 entries was easily the best on track.

"The battle with (Michael) Mills was awesome," Thompson said. We were back and forth at least seven or eight laps straight and then I was able to get a bit of a gap at the end before the yellow. (Michael) Mills raced a good race, we bumped a few times but we were close pretty much the entire race, and nobody gave an inch, but it was just enough to survive the race and I came out ahead.

With 15 minutes remaining in the race, the rain began to fall even harder. Drivers reached for rags in their cars to wipe off the windshields to improve visibility. By Lap 11, the field was back under caution due to two cars that went off track and stopped. The field ultimately finished just as it started, under yellow.

As the IMSA GT3 Cup Challenge by Yokohama Series made its first interesting appearance at (COTA), many drivers experienced "firsts" of their own.

In the Gold Cup, Miguel Benitez of Formula Motorsport earned his first victory in his first race of the 2013 season. Michael Levitas of TPC Racing has already secured the Gold Cup championship at this point, and is now running the rest of the season for the pure enjoyment of the sport. Levitas' teammate David Williams finished behind him for third place.

The dynamic duo of Levitas and Williams stood side-by-side at the podium in reflection of their finish on track, and true to form, they both mirrored each other in their response to the event.

"We can answer with the same word," Levitas said. "Soupy!" which was promptly echoed by Williams, who added "But it's a fantastic facility-even in the rain!" Which was likewise echoed by teammate Levitas, who added laughingly. "It was hard to see! A couple of times I found myself in some new places!" But overall, when asked if they would do it all again, rain and all, both were quick to smile and emphatically respond with a resounding, and simultaneous "yes!"

The Yokohama Hard Charger Award was presented to Al Carter of TruSpeed Autosport, whose first time behind a Porsche 911 this weekend was in the starting grid before the race. Carter had not turned a lap in any of the practice sessions and started the race from the very back of the pack to charge forward for a 15th place finish.

"I do feel like a hard charger!" Carter said. "I started in the back and not having the practice time, I saw a lot white and a lot of mist and a lot of cars in front of me, and a lot of taillights so it was tough coming through there. The rain actually picked up more on the last third of the race, so it was tough driving out there. I am a fan of the series and have been dying to get in here and I know the talent and the depth in this series and to run with them is just very cool!"

The Porsche 911 GT3 Cup cars start their engines again tomorrow at 11:15 a.m. CT for the final 45-minute sprint of the weekend.

The man who helped construct Circuit of the Americas was behind the cockpit for Race One of International Sports Car Weekend. Mark McKenzie hopped into a Porsche 911 GT3 Cup car for the first time this season and went on to finish third in Masters and ninth overall. McKenzie joined the Texas-based EFFORT Racing team for this event, to have the chance at turning some laps on the track he helped build. McKenzie was part of the original construction crew that put together the 3.4-mile, 20-turn circuit.

Craig Duerson, known for his love of racing in the rain, proved his talents in the wet session with his eighth Master Class win in the 2013 season. Duerson turned his hot lap in trip eight around the circuit, with a time of 2:31.941, good enough for sixth fastest on track.

Patrick-Otto Madsen of Ansa Motorsports is on a tear after earning his first podium of the year in Round 10 at Road America. Since then, the Boca Raton, Fla.-native has posted four straight podium finishes in the Masters Class. Today Madsen finished third in the veteran class.

Craig Duerson: First Place Platinum Cup Master "They key is that the line is not different on this track in the rain, it's the same race line. So you don't have to search for grip-it's in all the same places. That's the difference in racing in the rain here versus racing at Road America. It was a good race and I had a great time."

Patrick-Otto Madsen: Second Place Platinum Cup Master "It was tough. At first we had grip and as the rain started to fall all the grip started to go away. I was happy to keep it behind McKenzie most of the time and that was it. Bringing it home and hopefully have a dryer race tomorrow."

Mark McKenzie: Third Place Platinum Cup Master "It was my first race in the series and I had a great time. I was disappointed that building the track didn't give me more of an advantage. I was hoping I would have some secrets but in the end it was pretty slick for everybody. It was treacherous but the track did drain well I would have to say."

Heavy rain pounded the track just before the start of the IMSA GT3 Cup Challenge by Yokohama qualifications yesterday. After assessing the track conditions, IMSA Development Series Race officials elected to abandon the qualifcation session as a result of the adverse weather conditions. Due to the abandonment of the session, the starting grid for both races was set by combining the lap times from practice sessions one and two, as well as the 10 minutes allotted to drivers during what would have been qualifications. Yesterday the race director declared qualifications as practice, with 10 minutes remaining in the allotted time, many drivers went out just to get extra track time prior to Race One. Competitors fastest lap times set the lineup for Race One of International Sports Car Weekend, and second fastest laps set the grid for Race Two.

With the fastest practice time of 2:13.989, Snow Racing/Wright Motorsports' Madison Snow claimed the BBS Pole Award and led the grid from the start of Race One. EFFORT Racing's Michael Mills had the second fastest practice time, which lined him up in the front row with Snow. Angel Benitez Jr. and Brett Sandberg completed the second row. GT3TwitterIcon GT3 US Web Icon