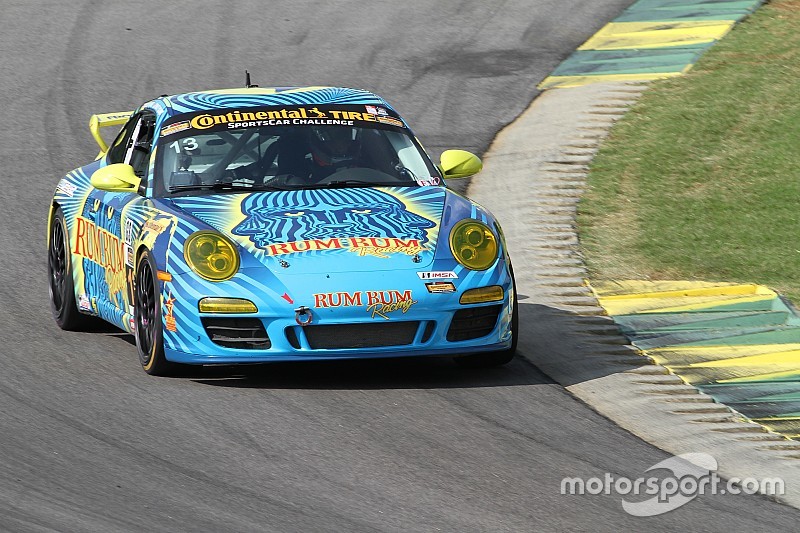 For the final few minutes, it looked like nobody wanted to win the Oak Tree Grand Prix Continental Tire SportsCar Challenge race at Virginia International Raceway.

A brutal battle in the Grand Sport class between the No. 99 Automatic Racing Aston Martin Vantage driven by Brett Sandberg, and B.J. Zacharias in the No. 14 Doran Racing Nissan 370Z, which was the fastest car in the race, looked to go down to the wire.

But with less than three minutes left in the two hour, 30-minute race, Zacharias coasted to a stop in the Nissan, out of gas. This left Sandberg unchallenged as he drove toward the finish line, an advantage he enjoyed for one minute and 25 seconds, until his Aston Martin ran out of gas.

This left an unlikely winner: The No. 13 Rum Bum Racing Porsche 911 driven by brothers Hugh and Matt Plumb. The win wasn’t such an unlikely one on the surface – the car was the fourth-fastest qualifier, behind the two Nissan 370Zs and a Ford Shelby Mustang GT350-R, and the Plumb brothers were the winners of the last Continental Tire SportsCar Challenge race, at Road America in Wisconsin.

It was unlikely because near the end of Hugh’s opening stint, the Porsche began smoking. Power steering fluid was leaking onto the engine, making the smoke, and quickly making the power steering fail.

Which may not sound that bad, but steering a Porsche 911 without power assist is tough, and Matt Plumb did it for his entire last stint of nearly an hour.

“When you lose power steering, the car is very difficult to drive,” Hugh said. Matt drove for 55 minutes and stayed close to the race pace, so my hat is off to him.”

The win at Road America, Matt Plumb’s 21st, made him the winningest driver in series history, and now he has added one more. “Every win is huge in this series,” he said. “considering the level of talent.”

Second in Grand Sport was Lawson Aschenbach and Matt Bell in the No. 9 Stevenson Motorsports Chevrolet Camaro Z/28.R, and third was their Stevenson team car, the No. 6 Camaro of Andrew Davis and Robin Liddell.

In the Street Tuner class, a win by Spencer Pumpelly and Luis Rodriguez, Jr. gave Porsche a sweep for the race. Their No. 17 RS1 Porsche Cayman finished ahead of the Murillo Racing Porsche Cayman of Jeff Mosing and Eric Foss. Third was the No. 34 Alara Racing Mazda MX-5 of Christian Szymczak and Justin Piscitell. Tom Long and Andrew Carbonell were fourth in another Mazda MX-5, the No. 26 of Freedom Autosport.

Pumpelly was especially gratified to score a win at Virginia International Raceway, which the Virginia native says is his “favorite track in the U.S.” He began racing here 13 years ago, but this is his first victory. “To finally get a win means a lot,” he said.

Next up for the Continental Tire SportsCar Challenge: The Lone Star Le Mans at Circuit of the Americas in Austin, Texas, September 16-18.

FIREY FEW MINUTES FOR ESPENLAUB: The scariest moment of the race came early, when the No. 09 Automatic Racing Aston Martin Vantage driven by Charles Espenlaub caught fire at the rear of the engine bay. Espenlaub stopped on the track and got out with no injuries.

It was a little too close to home for the Florida driver who, in 2009, was driving a Mazda MX-5 at Thunderhill Raceway in California in a 25-hour endurance race when, in hour eight, “My car exploded in a giant fireball,” he wrote in a story for Grassroots Motorsports magazine. He was not seriously injured, but suffered burns to his hands.

The article, about how he survived the fire and what he would do, and wear, differently next time, was heralded as one of the best stories of its kind ever written. It was accompanied with photos of the ruined Mazda, and of Espenlaub’s charred suit and helmet.

DWYER OUT OF ACTION: Liam Dwyer, the usual co-driver for Andrew Carbonell in the No. 26 Freedom Autosport Mazda MX-5, missed the Virginia International Raceway event due to medical issues.

Dwyer is the former U.S. Marine who, in May of 2011, was searching a compound in Afghanistan when he stepped on an explosive device. He lost most of his left leg, and had severe injuries to his other leg and an arm. He battled back from that to become a winning Continental Tire SportsCar Challenge winner, and he and Carbonell came into the race at VIR in second place in the season points.

But last Wednesday, Dwyer let Mazda know that his doctor said that a skin condition on his upper left leg, where his prosthesis is attached, could get worse if he didn’t take a break from using it. “He was philosophical about it,” said Jade Gurss, who handles public relations for Mazda, “but you could tell in his voice how disappointed he was.”

The good news: Tom Long, a former MX-5 champion who now drives one of Mazda’s SKYACTIV diesel Prototype cars in the TUDOR United SporsCar Championship, was available since the Prototypes weren’t running at VIR. Long not only co-drove the No. 26 with Carbonell, taking the first stint, but he stepped into the Freedom team MX-5, the No. 25 co-driven by Britt Casey, Jr. Long ended up finishing both fourth and sixth in the ST class.

Dwyer intends to be back for the next race, at Circuit of the Americas in Texas in September. And while he took a hit in the points, teammate Carbonell moved into a two-point lead over fellow Mazda racers Stevan McAleer and Chad McCumbee, who drive for C.J. Wilson Racing.