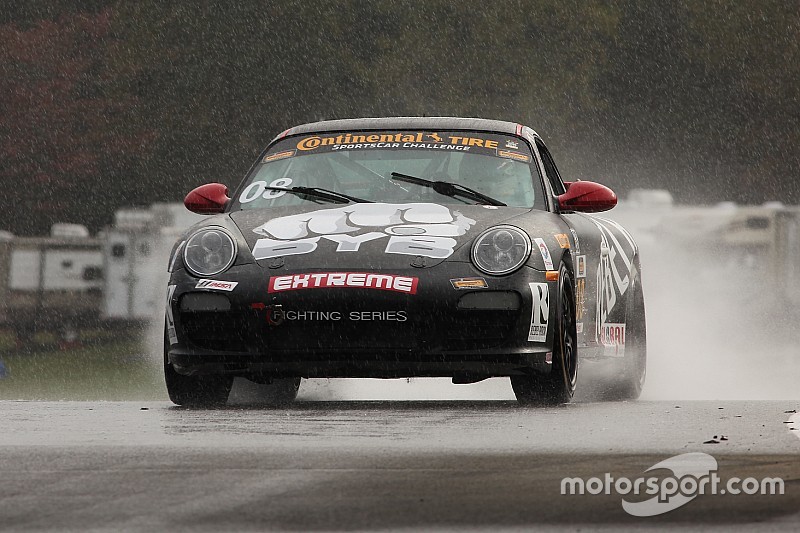 As Rebel Rock Racing embarks on the 2016 Continental Tire SportsCar Challenge Series (CTSC) season, the team is rolling out fresh new faces behind the wheel and behind the program, as well as an entirely new image for the program as a whole.

In the Street Tuner (ST) #7 Porsche Cayman the team has signed Robin Liddell and Elliott Skeer for the 2016 season. Liddell is the reigning 2015 IMSA CTSC GS Champion, and will also be racing in the IMSA WeatherTech SportsCar Championship for the season in a new Audi R8.

Rebel Rock has shown the speed needed to win and I feel every piece of the puzzle is now together.

Of the opportunity Liddell mentions, “I’m delighted to be joining Rebel Rock for a crack at the ST class championship in 2016. Having won the 2015 GS class last year I was pretty keen to return to the Continental Tire Series one way or another, and Rebel Rock has given me that opportunity. I got to know Jim Jonsin last season and he was instrumental in helping put the deal together. Having met the new ownership and seeing the performance of the car at the Roar test, I feel really positive about our chances. I’m also happy to be teaming with Elliott (Skeer), who has proven to be fast and consistent with his previous success in Porsche’s, I can’t wait to get on the grid at Daytona!”

Elliott Skeer was awarded the Porsche Young Driver Scholarship to compete in the 2015 IMSA Porsche GT3 Cup. He contested for victories from the opening round and would go on to achieve 10 pole positions, 13 podium finishes, and five victories in the 16 race season. Elliott clinched the Championship and became the 2015 IMSA GT3 Cup Champion and Rookie of the Year. Shortly thereafter, Elliott was selected to represent America in Porsche’s International Junior Shootout. Learn more about Elliot here: http://elliottskeerracing.com

“I am very happy to be a part of this program and I feel this could be a very successful relationship. Rebel Rock has shown the speed needed to win and I feel every piece of the puzzle is now together. The Porsche has shown to be the car to have in ST, having that feels like were starting off on the right foot. I've had success with the brand and I'm hoping to expand that this coming season!” Skeer continues; “Robin is a world class driver, having someone like him alongside pushes me harder to give it my all. I’m not used to having a co-driver, but having someone who has done so well in this series will make that a much easier transition.”

The #8 ST entry will be fielded by Team Owner Jim Jonsin pairing with longtime friend Michael Mathé. Jim Jonsin states, “After a long offseason I’m excited to get back in the car at Daytona, which happens to be my favorite track. We’ve teamed with Frank DePew and Tom FitzGerald to add many years of racing experience to our veteran team. We also really like our chances with Robin Liddell and Elliott Skeer in the #7. As for me, I feel Daytona is my best track, and consider myself lucky to be driving with Michael Mathé in the new look #8!”

Michael Mathé, Senior Vice President, International at Konica Minolta Business Solutions USA, and President Konica Minolta Business Solutions de Mexico, joined the company in 2012. A 20 year industry veteran, is responsible for managing Konica Minolta's sales and marketing strategy as well as operations in Latin America and Canada; he also manages the OEM relationships and is responsible for the Motorsport Strategic Alliance Program. Mathé leads the sponsorship of Wayne Taylor Racing since 2014 and has raced in IMSA GT3 Cup Challenge, presented by Yokohama. He resides in Davie, Florida with his wife Pam and two daughters Marielle and Margaux. Michael states; “I’m really excited to be racing alongside my good friend Jim (Jonsin) at Daytona. I’m really looking forward to getting behind the wheel this weekend with the Rebel Rock Racing team in their Porsche Cayman.”

In the offseason Jim Jonsin partnered with Tom FitzGerald and Frank DePew as Co-Principle’s going forward to guide the program in its new direction. “We are very fortunate to be able to pair Robin and Elliott in our #7 Rebel Rock Racing Cayman,” said Tom FitzGerald, Rebel Rock Racing Team Co-Principle and COO. “These drivers are two very talented sports car drivers, and pairing a proven Champion like Robin with his extensive experience with such a talented young driver is very exciting for us. Frank DePew and I have recently partnered with Jim Jonsin, the founder of Rebel Rock Racing, to further develop the Rebel Rock Racing program and we are very pleased with the progress so far. We’re equally excited to have Michael joining Jim in the #8. Michael’s shown strong pace in the GT3 Cup cars, and Jim’s a proven competitor at this level.”

The Continental Tire SportsCar Challenge BMW Performance 200 at Daytona kicks off with Practice on Wednesday, January 27th at 1:30 pm EST. The green flag for the race drops at 1:45 pm EST on Friday, January 29th, 2016.