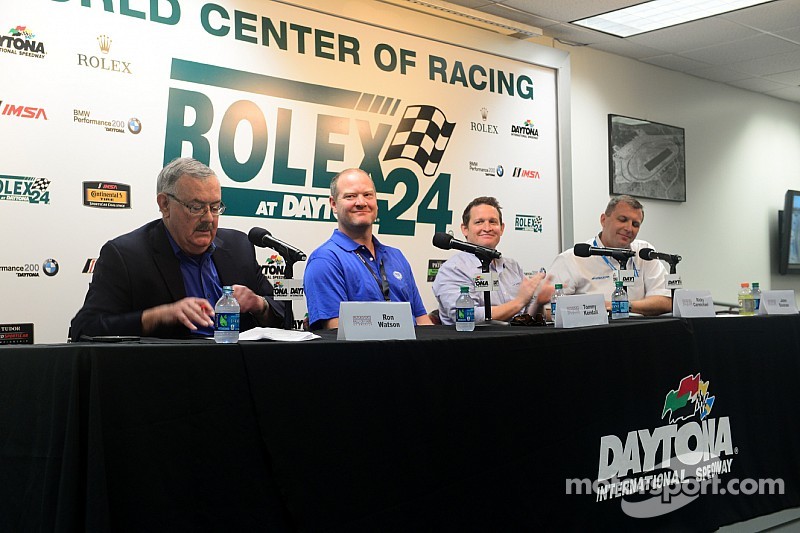 The Motorsports Hall of Fame of America will induct its final Detroit class at the city’s famed Fillmore Theater in June of this year, president Ron Watson announced at Daytona International Speedway during the Rolex 24 at Daytona.

Six elite drivers and one superb motorcycle rider join the list of legends from across the broad spectrum of American motorsports. Two of the class were on hand for the announcement, which marks the last time this Hall accepts participants in the Motor City; it moves to the World Center of Racing, Daytona Beach following the June 18 ceremony.

The class includes, in alphabetical order, Ricky Carmichael, Walker Evans, Warren Johnson, Tommy Kendall, Mark Martin, Duke Nalon and Lloyd Ruby. “This year’s class truly reflects the wide range of American motorsports - which has always been the foundation for our facility,” Watson said. “These gentlemen achieved success on two wheels and four, on dirt and pavement, on every kind of track - plus off the road entirely.”

Carmichael’s exploits on two wheels have earned him the title GOAT - greatest of all time - and that is no lie. The Floridian won 125cc Supercross and three consecutive outdoor Motocross titles before crossing over to the 250cc class and compiling 10 consecutive National Motocross titles in either class. Carmichael owns a career total of 150 victories and his 102 Motocross victories amass an all-time record.

On-hand for the announcement, Carmichael was gracious and humble in accepting the honor, noting that he couldn’t have achieved his success without the assistance of friends, family and the manufacturers that put their trust in him.

The Professor, as Pro Stock standout Warren Johnson is called by all in NHRA drag racing, owns six Pro Stock titles and a total of 97 NHRA national event victories. He’s also a two-time IHRA champion in the Mountain Motor Pro Stock division. Johnson’s four consecutive U.S. Nationals crowns, from 1992-95 made him a household name amongst even those that know little about drag racing and NHRA ranked him seventh on the list of the best drivers of NHRA’s first 50 years. He is a member of the International Motorsports Hall of Fame.

It’s appropriate that Tommy Kendall and Mark Martin enter this Hall together - and that their entry is announced here at Daytona because the duo shared a winning car together 20 years ago, together with Paul Newman and Robby Gordon, driving for Jack Roush. Kendall holds the all-time record for consecutive wins in Trans-Am, beating Mark Donohue with his 11th victory at Road America in 1997. He’s competed in IMSA GTP, IROC, NASCAR, Corvette Challenge and the Rolex 24, where he has two victories.

Kendall’s stellar career, he said, came through the assistance of the teams with whom he drove and he remarked that, unlike other sports, drivers and riders rely on the competence of the people behind the scenes. Alluding to his father’s football career, Kendall cracked up the room with his remark that, unlike that sport, racers never have to worry about deflated balls.

Martin, of course, is known for being the best driver not to win a NASCAR premier Cup championship, having made 882 starts and finishing a bridesmaid five times. Martin does have a record five IROC titles and won 96 NASCAR races during his entire career (40 Sprint Cup, 49 Xfinity and seven Camping World). He’s now a driver development coach for Roush Fenway Racing, where he scored the majority of his wins.

Dennis “Duke” Nalon’s open-wheel career spanned the time before and after World War II and he, too, is known for races he should have won and championships he could have won, but for mechanical or accidental difficulties. He set the qualifying record at the Indianapolis 500 in 1949 and again two years later and won his last race, in a midget, in 1952. He was known for his exploits in the famed Novi racecar and his best showing at Indy came in that car in 1948, when he placed third in the Greatest Spectacle in Racing.

Lloyd Ruby drove open- and closed-wheel cars with élan, racing 19 consecutive years at the Indianapolis 500 (with a best finish of third in 1964) and racing sports cars around the world. He drove Ebb Rose’s Micro-Lube Maserati, J. Frank Harrison’s Lotus and excelled in Carroll Shelby’s Ford GT40 with Ken Miles. Ruby succumbed to cancer in 2009 at the age of 81 in his hometown of Wichita Falls, Texas.

The final Detroit induction for this stellar class of 2015 in the Motorsports Hall of Fame of America takes place Jun 18 and is open to the public. Tickets may be obtained by calling 248-349-7223 or through the website: www.mshf.com.