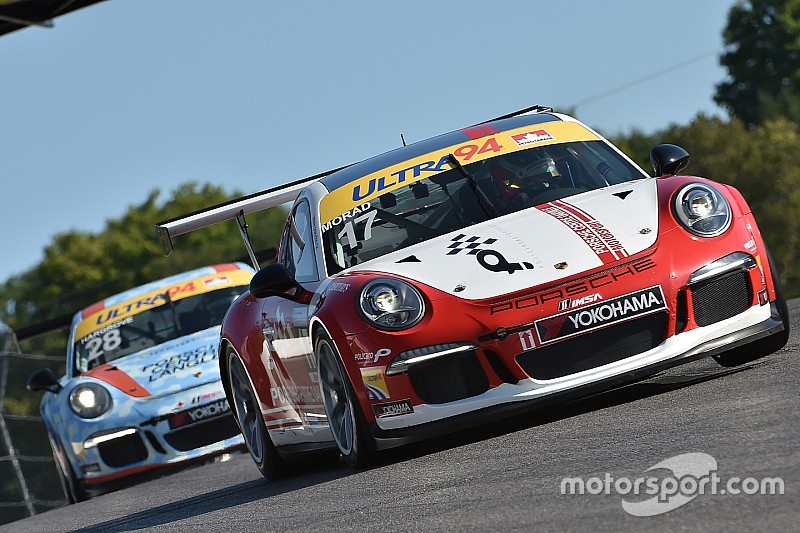 The weekend started with Scott Hargrove taking a dominant victory Saturday in Round 11. Hargrove, from Tsawwassen, British Columbia, drove his No. 28 OpenRoad Racing Porsche to a 13.521-second victory today over Platinum Cup championship leader Daniel Morad. Zach Robichon, from Ottawa, pressured Morad for the entire race before finishing third in the No. 78 Mark Motors Racing Porsche.

Sunday, Robichon won the 45-minute race by 11.868 seconds over Hargrove. It was the second victory of the season for series rookie standout Robichon, who ended up third in the season standings. Tim Sanderson, from Pickering, Ontario, rounded out the overall podium finishers in the No. 07 Porsche Centre Oakville/Alegra Motorsports Porsche and also was the top Platinum Masters finisher.

Morad finished fifth to clinch the title. He topped the standings with a 205-200 edge over fierce rival Hargrove in the final standings.

"We've done a great job all year," Morad said. "Alegra Motorsports and Porsche Centre Oakville have been so supportive of my whole career and getting me back in the car and behind the wheel. I'm forever thankful for that, and I can't wait for next year."

Morad started from the pole, but Hargrove stayed in fast pursuit. The two Canadian stars hurtled through Turn 1 side by side on the second lap, with Morad clinging to the lead.

Then another one of the flashpoints that has characterized this intense rivalry between Morad and Hargrove all season ignited with 27 minutes remaining.

Hargrove dove under Morad in Turn 9 of the 10-turn, 2.459-mile circuit, and the two cars made contact in Turn 10. The contact caused Morad to spin and fall to fifth place before he restarted. Hargrove took the lead, with Robichon right behind.

But Hargrove was assessed with a drive-through penalty for incident responsibility, handing the lead to Robichon with 13 minutes remaining.

"I think it was a racing incident," Hargrove said. "Aggressive on my part, aggressive on his part, so I'm not sure about the penalty. It is what is. It didn't matter at the end of the day. We were still going to be second in the championship even if I did win the race."

Hargrove trailed by 13.865 seconds after serving his penalty, and Robichon maintained that gap until easing off the last two laps to cruise to the checkered flag. The victory was the second of the season for Robichon, who also won Round 2 in mid-May at CTMP after Hargrove and Morad both were eliminated from the race after a first-lap collision.

Morad and Hargrove to continue their championship battle at CTMP