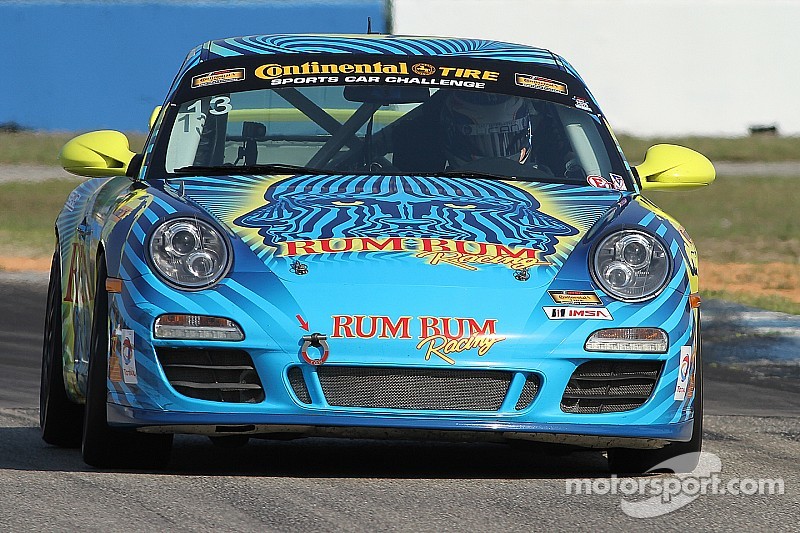 Hugh Plumb will start the 2.5-hour race from the inside of the third row.

Sebring, Fla. – Looking to win in Florida once again, Luis Bacardi’s Rum Bum Racing will start from fifth on the grid at Sebring International Raceway on Friday following a 15-minute qualifying session Thursday afternoon. Hugh Plumb set a fast lap time of 2:17.244-seconds on the fourth lap of his five lap run to start the 2.5-hour Visual Studio 150 race from the inside of the third row.

It’s great to be in the top-five today at a place where Rum Bum Racing is always very optimistic,

Hugh Plumb will open the race, which marks Round 2 of the Continental Tire SportsCar Challenge championship, in the No. 13 Rum Bum Racing Porsche before handing the car over to his brother and co-driver Matt Plumb who will take the car to the checkered flag. The duo combined for a huge victory at Daytona International Speedway to open the season and would like nothing more than to keep the momentum going in the early stages of the season.

The Rum Bum Racing Porsche machine was immediately quick when the team went to work at the 3.74-mile former airport road course running among the top-five throughout both practice sessions held on Wednesday. The team set the third quickest lap in Practice 1 and the fourth fastest time in Practice 2.

“It’s great to be in the top-five today at a place where Rum Bum Racing is always very optimistic,” said Hugh Plumb following the qualifying run. “I feel like I owe the Rum Bum guys nothing but the best so I’ll give them that tomorrow. I think that is about what we had today. Patience will be key tomorrow and we’ll just let the race come to us a little bit. The race will be determined by an amazing crew and Joe Varde (crew chief) on the pit box making the right calls and of course with Matt (Plumb) taking the car to the finish. Rum Bum is the best out there, and we’ll get it done.”

Rum Bum Racing won the opening Continental Tire SportsCar Challenge round at Daytona and will look to carry that winning momentum into Round 2 at Sebring on Friday. IMSA.com will carry live video coverage of the 2.5-hour race.