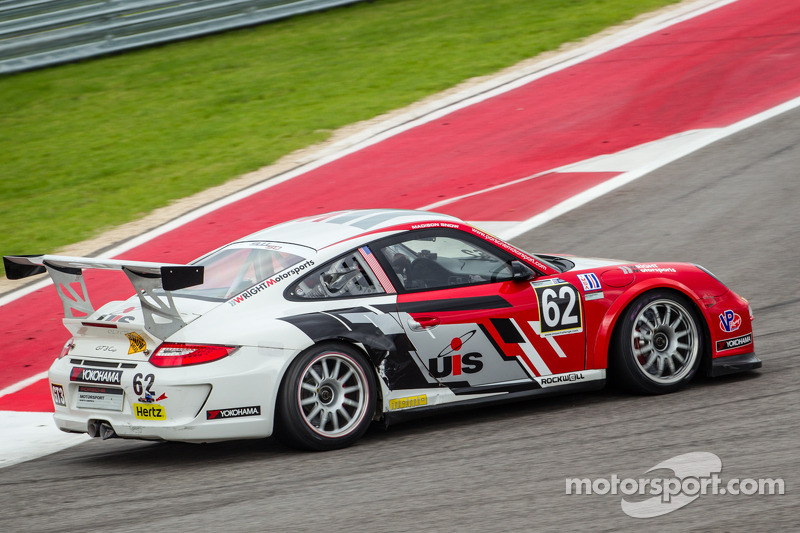 BRASELTON, Ga. (Oct. 19, 2013) - Title winners of the IMSA GT3 Cup Challenge by Yokohama Series were determined by the smallest of margins in the season-finale race at Road Atlanta. The Platinum Cup team championship was decided by a mere point, while the Masters Championship first and second-place finishers finished with two points between them. Aside from a single caution period in the middle of the race, the 45-minute contest was clean and green for the 16th Annual Petit Le Mans Powered by Mazda event.

"It was really nerve-racking," said Wright Motorsports team owner John Wright. "We had a lot of that we had to accomplish his weekend although we wrapped up the drivers championship in COTA. Madison does his job every weekend and he's really responsible for where we're at and then of course our team has been building on this for the past three years. They're solid. They make me look good so I really appreciate everything everyone does for Wright Motorsports and I want to thank everyone that is involved in the series. Porsche, IMSA, Yokohama it's just a great place to be."

With the 2013 Platinum Cup individual championship secured, Wright Motorsports still had work to be done at Road Atlanta in the season finale event. The team didn't need a win to take the title, and settled for Snow's second-place finish today behind EFFORT's Sloan Urry. Urry put the pressure on polesitter Snow from the beginning. The two drivers were nose-to-tail on Lap 8, and on Lap 13 Urry had a run on Snow coming into Turn 12 and out-broke him coming into Turn 1 on the inside. Urry held the lead and finished two seconds ahead of the rest of the field. In his seventh lap around the circuit Urry posted the fastest lap of the day with a time of 1:25.596.

"In Race One this weekend I had an opportunity to win the race and unfortunately I made a knucklehead mistake and ended it," Urry said. "I had to make up for yesterday and I did that the only way you can - by winning. It feels good. EFFORT Racing deserves it and it's just another confidence booster going into next year."

With a second-place finish in Race Two at Road Atlanta, Snow brought home the team title for Snow Racing/Wright Motorsports. The team was able to edge past EFFORT Racing by just one point in the final contest of the year.

The top drivers had a flawless race, causing infrequent changes in position. From the beginning the top four drivers - Snow, Urry, Angel Benitez Jr. and Craig Duerson pulled away from the rest of the field.

"This race was very hard," Benitez Jr. said. "We were all very fast and this is kind of race doesn't allow for mistakes because you won't be able to recover. I was in third place and because we all three had the same pace and I was waiting for the right moment to come to make a move. Unfortunately for me that moment never came. It was a competitive and fun year with ups and downs driving the Porsche and pushing the Yokohama tires in different weather conditions. Thanks to IMSA, MOMO, my family and all the workers that make this season possible."

In the Gold Cup, TPC Racing landed two drivers on the podium in Ben Keating and David Williams. For Keating, the win was his second of the year - his first coming in Race One just the day before.

"Today I started P12 on the grid, ended up P10 overall and it was still a lot of fun had a really good battle with several of the Platinum Cup cars and I felt like I was faster but I couldn't get them on the straights," Keating said. "It made for fun racing so it was a lot of fun. A great race finished top 10 for the TPC team and number one in Gold so it's a good day."

"It was great," Williams said. "It was a great season and great experience for me in my first year with the series. I started in the back of the grid and ended up with second so I'm very happy with that. And I was super competitive with the 52 car of Kristin Treager today so that was a lot of fun."

"It was quite a race," Treager said. "There was oil all over the track so I was just trying to go as fast as I could without losing it. I kept trying to get a run in Turn 10 out of the braking zone but I kept sliding in the oil out of Turn 7 so I was having a hard time trying to catch David (Williams)."

Several times throughout the race Williams and Treager were separated by only tenths of a second. For Treager's efforts to climb from 23rd to 16th position over the course of the race, she received the Yokohama Hard Charger Award.

After a hard fought battle by all, participants enjoyed a championship celebration yesterday at Road Atlanta.

While the Platinum Cup Masters Championship came down to the final race of the final event, Craig Duerson of NGT Motorsport had the lead and kept it for the entirety of the race. Duerson started in fifth position overall in the Platinum Cup division, side-by-side his fellow Masters frontrunner Kasey Kuhlman.

Kuhlman and Duerson's best times of the race were separated by only three thousandths of a second. Kuhlman edged out Duerson for the faster lap, which he turned in his sixth trip around the 2.54-mile, 12-turn circuit. Kuhlman spent most of the day fending off TruSpeed Autosport's Brett Sandberg for fifth overall Platinum Cup position.

Phil Fogg Jr. with TruSpeed Autosport landed on the third step of the Masters podium. For Fogg Jr., it was his sixth time on the Masters podium this season. In the No. 44 Porsche GT3 Cup Car, he turned a fastest lap of 1:27.274. Although Fogg Jr. claimed today's third-place finish, Amadeo Quiros achieved the 2013 Third Place Masters Championship.

"It's been a good weekend for me. I felt real comfortable. NGT prepped a really good car for me yesterday in the rain and today in the dry so I had a good car underneath me and I really owe it to them. I just tried to be consistent, tried to chase the kids, keeping Kasey behind me is a hard task."

"The track was fast today but it was a little tricky. We had some coolant at the beginning (on the track surface) so for the first 10 minutes it was like solving a puzzle. My job was just to dog (Craig) Duerson and try to make him make a mistake or take advantage of one if he did. To his credit he didn't put a wheel wrong and he's the champ and I'm proud of him for that. He did great."