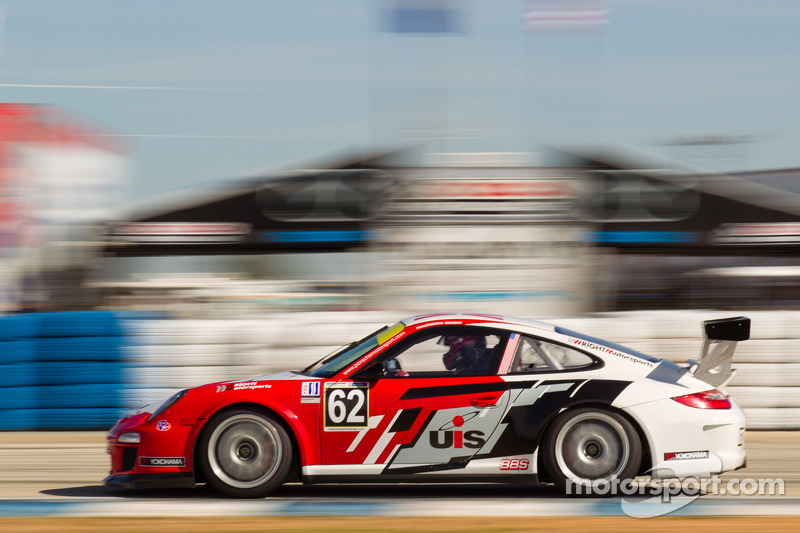 Madison Snow weaved through the wet terrain to capture the BBS Pole Award for the fourth time this season.

Madison Snow weaved through the wet terrain to capture the BBS Pole Award for the fourth time this season. Snow bested the fastest time of Ashley Freiberg with less than 10 minutes to go and his time stood until the red flag waved with three minutes left. Thompson Racing's Colin Thompson went off the track at Turn 6 and the No. 14 car stopped in an unsafe location, resulting in an early end to qualifications.

"I like the rain around here because I know how to get around here in the rain," Snow said. "One lap it looked clear and the corner would be fast and the next time it'd be downpouring on the corner. I kept trying to plan for the next lap but it was never working because it was always different. I just went as fast as I could and was on edge all the time."

With a time of 2:16.018, Snow of Snow Racing/Wright Motorsports turned a new qualifying lap record in the Porsche 911 GT3 Cup car despite the damp conditions. The 17-year-old will take advantage of the track time as he is doing dual duty by competing in the GRAND-AM Rolex Sports Car Series Sahlen's Six Hours at The Glen on Sunday.

EFFORT Racing's Freiberg and Masters contender Craig Duerson of NGT Motorsport exchanged fastest session times early on when the track was the soggiest. Freiberg ultimately turned her quickest time on her ninth lap and Duerson settled for a third-position starting spot. This will be Duerson's highest start of the season.

"It was a blast," Duerson said. "I was hoping to do better. I was better in practice. There was a little traffic, a little of this, a little of that. Didn't end up where I wanted to but it should be good."

Duerson's fellow Masters contenders Kasey Kuhlman and Marc Bunting were the second and third fastest in the championship and will start 11th and 13th overall, respectively.

"Obviously with me being a competitive person I know I could have been on pole now knowing I was just tenths of a second off of Madison (Snow)," Freiberg said. "I caught traffic on a lot of my laps and I think I caught it on my fastest lap. Just knowing that in the back of my head it's like 'Dang I was so close but so far'."

In the Gold Cup, John Goetz with MGM Racing turned the fastest lap in his category for a new qualifying lap record at Watkins Glen International. His time of 2:24.524 was posted on his ninth trip around the track.

Racing legend Elliott Forbes-Robinson watched from race control as the drivers battled rainy conditions. A wet Watkins Glen track is nothing new to the Motorsports Hall of Famer who will drive the pace car for IMSA GT3 Cup's 100th race taking place Saturday at 1:05 p.m. Forbes-Robinson has accrued 51 major victories in his 30-year career, including a number of top-five finishes at the storied Glen and a win at the Sahlen's Six Hours in a Porsche 911 in 1974. He also won the Six Hours of The Glen in 1997, the same year he found victory lane at the 24 Hours of Daytona.

Before the historic race begins, fans will have a chance to take part in off-track activities honoring the centennial. Beginning at 9 a.m. on Saturday, Porsche, Yokohama and IMSA representatives will answer questions about the iconic Porsche 911. Car club participants and fans are encouraged to attend to learn more about what it takes to master the skill of driving the GT3 Cup car and how they can become future series participants.

After fans learn the ins and outs of the Porsche 911 GT3 Cup car, they can make their way to the midway area at 10:30 a.m. for the IMSA GT3 Cup Challenge by Yokohama autograph session.

The 100th race will be followed by a silent auction with the Austin Hatcher Foundation which begins at 2:15 p.m. in the GRAND-AM Fanzone. Four 24x36 canvas photos, a banner signed by all 100th race participants and a limited edition hardcover Porsche book are a few of the items up for bid.