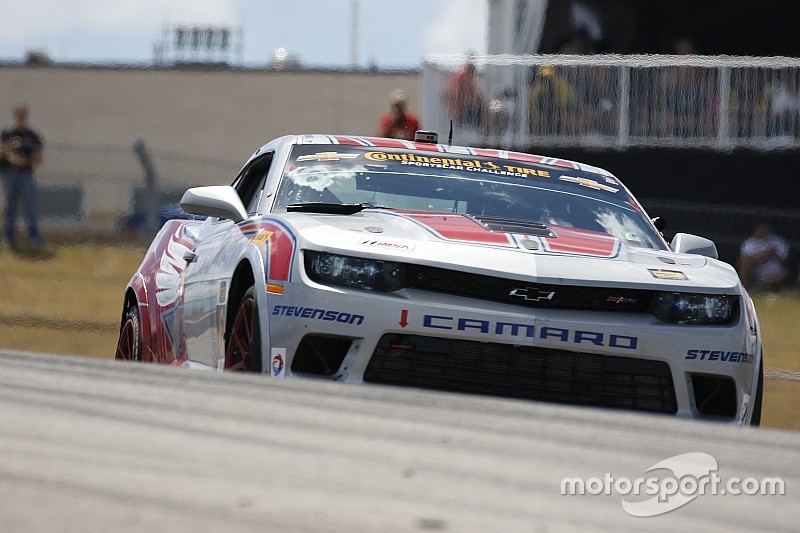 AUSTIN, Texas – The 2015 championship in the Continental Tire SportsCar Challenge isn’t quite locked up, but after Robin Liddell and Andrew Davis drove their No. 6 Chevrolet Camaro Z28.R to their fourth Grand Sport victory of the season Friday, you can’t blame them if they are dusting off a spot on the mantle for the trophy.

The Stevenson Motorsports duo topped a 42-car field at Circuit of the Americas in Austin, Texas, taking the victory in the two-hour, 30-minute race with a 1.292-second margin over the second-place No. 15 Ford Shelby GT350R-C of Scott Maxwell and Billy Johnson of Multimatic Motorsports.

Third was the Nissan 370Z of Doran Racing’s B.J. Zacharias and Brad Jaeger, just ahead of their team car, driven by Nick McMillen and Nicholas Hamman, who finished fourth.

The outcome could have been different had the No. 13 RumBum Racing Porsche 911 of brothers Matt and Hugh Plumb not suffered a punctured radiator while the car was running third, having led more than 20 laps – the team came into the race 10 points behind Liddell and Davis, but the 38th-place finish put the RumBum team in the hole.

In Street Tuner, Spencer Pumpelly and Luis Rodriguez, Jr., took their fourth victory of the year in their No. 17 RS1 Porsche Cayman, narrowly holding off the second-place No. 5 Mazda MX-5 of Stevan McAleer and Chad McCumbee. Their CJ Wilson Racing team is now in the ST points lead.
The series winds up the season at Petit Le Mans at Road Atlanta October 2nd.

SONIC SIGNS WITH IMSA: SONIC Tools and the International Motor Sports Association have signed a multiyear agreement that makes SONIC, a North American subsidiary of the Netherlands-based SONIC Equipment, the Official Hand Tool Supplier of the TUDOR United SportsCar Championship.
The Alabama-based North American division of SONIC Tools is a good fit for the partnership, said IMSA Vice President of Marketing David Pettit. “With a hard-earned reputation for quality in Europe, we are confident SONIC Tools will become popular here in the U.S. with IMSA competitors and enthusiasts.”

MATT McMURRAY, OLD TIMER: The driver for the JDC/Miller Motorsports Prototype Challenge car, Matt McMurray, qualified second for Saturday’s Lone Star Le Mans race, but there’s another reason the race will be a memorable one for him: It’s is 100th race, even though McMurray is just 17.

He made the 100th-race connection in a Tweet: “I think I know why life has been flying by. Next weekend's IMSA/WEC doubleheader in Austin – 3 years and 9 months removed from my first race at Road Atlanta in Skip Barber – will be my 100th car race. It's been an incredible ride. The people. The places. The life and race craft experiences. JDC and the LMPC class will be my home at COTA. If you attend, stop by and say hello!”

Weather already a major factor this weekend at Road Atlanta