The No. 6 of Andrew Davis and Robin Liddell will see the green flag fly from the second row while the No. 9 of Matt Bell and Andy Lally will start not far behind in the fourth row.

Kansas City, Kan. (6 June 2014) – After showing strength in practice at Kansas Speedway, both Stevenson Motorsports Camaro Z/28.R machines will start Saturday night’s IMSA Continental Tire SportsCar Challenge race at the front end of the grid for the Grand Prix of Kansas. The No. 6 of Andrew Davis and Robin Liddell will see the green flag fly from the second row while the No. 9 of Matt Bell and Andy Lally will start not far behind in the fourth row.

Two busy practice sessions ahead of qualifications saw the sister Stevenson Camaros run consistently strong as they continually improved their lap times, finishing both sessions inside of the top-10 despite changing track conditions throughout the day.

The 2.37-mile roval presents unique challenges to the IMSA Continental Tire SportsCar field as the ST and GS classes again unite for a single race. The tight and technical turns throughout the “road course” section of the track provide little opportunity for passing, but the team is hoping to make the most of the strong starting positions with the Chevrolet Camaro Z/28.R machines in Saturday’s 150-minute race. 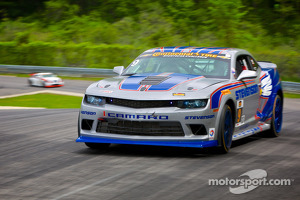 “Our Stevenson Camaro Z/28.R was running really well and after the second practice session we were very optimistic with being P2,” said Davis, who will open the race from fourth on the grid. “I went into qualifying for the first time this year really knowing I had a shot at the pole. The track has changed with the night – the temperatures have come down. We just fought rear grip a little bit so I was having a hard time off of some of the slower corners and that’s really the difference. It’s a fun lap though. The banking is very exciting and the facility here at Kansas Speedway is great. We have a good car. We’re starting up near the front, just not as far up as I wanted to be. I’m proud of the Stevenson guys for how hard they’ve worked. They’ve given me a great car and I’ll make sure I hand it off to Robin (Liddell) in good fashion tomorrow.”

Bell will start from seventh on the 52-car combined-class grid before handing the No. 9 Camaro Z/28.R over to Lally.

“We have a good race car, we just don’t have a great qualifying car,” added Bell after his qualifying run. “We’ve been hunting little issues this whole time. We’re okay for the race we just don’t have much speed on our own. It looks like the No. 6 car found something that we didn’t find so hopefully we can kind of adopt that as well and go from there. We’re not displeased with the qualifying effort, it’s still a top-10. We started 10th at Lime Rock and finished third so maybe we’ll make up a couple more positions and be there at the end for the win.”

Following the busy day of practice and qualifying, Team Manager Mike Johnson was pleased with the team’s effort.

“We’ve been working really hard on making a good race car,” offered Johnson. “We didn’t expect much in qualifying but the good news is that our car is really good on the oval. Nobody passes between Turns 1 and 6. So we’re really happy with what our car is doing out there. We’re pretty pleased with where we are.”