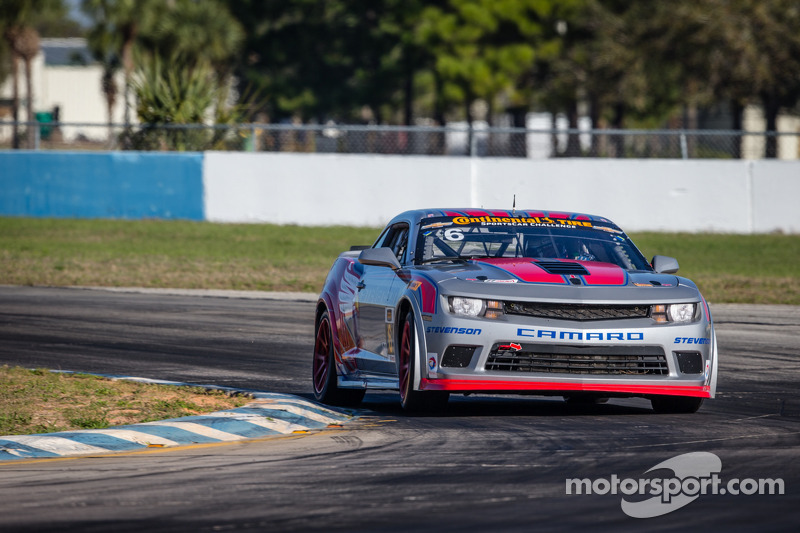 The two-car Camaro Z/28.R effort will open the race from the second and fourth rows.

The two-car Camaro Z/28.R effort will open the race from the second and fourth rows.

Andrew Davis, who shares the No. 6 Camaro Z/28.R with Robin Liddell, will start from fourth on the 60-car combined class grid after posting a quick lap time of 1:36.154-seconds.

“I’m really proud of the Stevenson Motorsports crew,” said Davis. “We had our Camaro Z/28.Rs in pretty good shape for qualifying. We just made steady progress all throughout yesterday and today. I didn’t drive much yesterday but I got my share of seat time today and that helped me a lot. I did a mock qualifying run in practice and kind of got a baseline and was able to find quite a bit of time – I’m surprised at the amount of time in qualifying – but also just as surprised that it was only good enough for P4.

It’s just a very fast group and very competitive. We still have some work to do. Now we just have to focus on the race and our race set up. Tire management is going to be the key for us here. With some of the rule changes that have come about for the Camaro and just the way these races are run we’re really going to have to manage tires and just do what Stevenson Motorsports does best - which is race – and get the car up there.”

The No. 9 Camaro Z/28.R was qualified by Andy Lally and will start seventh in tomorrow’s race. The driver order will see Stevenson Motorsports co-driver Matt Bell drive the final half of the race at his home track of Laguna Seca as he looks to keep his run of strong finishes (2nd place/2013, Win/2012 and 2011) at the track intact.

“We had some weight added to the car ahead of this race, and that’s what happens,” said Lally of the run. “We expected it and I’m surprised we’re up as far as we are. Andrew (Davis) did a great job. He did a good lap and it is what it is. We’ll play the hand that was dealt to us and we’ll see how it turns out tomorrow. Stevenson Motorsports has worked hard to develop the intricacies of this new Camaro Z/28.R and we’ll just continue to work to improve it.”

After Stevenson Motorsports won the most recent round at Sebring International Raceway, the team now faces a greater challenge as 100 pounds was added to the Camaro Z/28.R machinery as IMSA seeks a balance of power in an effort to find parody between the various car makes competing in the Continental Tire Sports Car Challenge Series.

“Laguna Seca has been pretty good to us in GS,” said Team Manager Mike Johnson. “One of the years we won, we were in 18th place with 30 minutes to go and we found a way to win it. So I’m not overly concerned. We had a great weekend in Sebring of course and we’ll just have to see what the added 100 pounds will do in the long run and put ourselves in good position in the end.”

Stevenson Motorsports has never finished off of the podium at Laguna Seca over the previous three years. The team won in 2011 & 2012 and finished second in 2013. The team targets a return trip to the Laguna podium in Saturday’s race which begins at 12:45 PM (PST).

CTSCC: Rum Bum Racing looking to move up in Monterey

CTSCC: Burton Racing ready to make some moves in Monterey