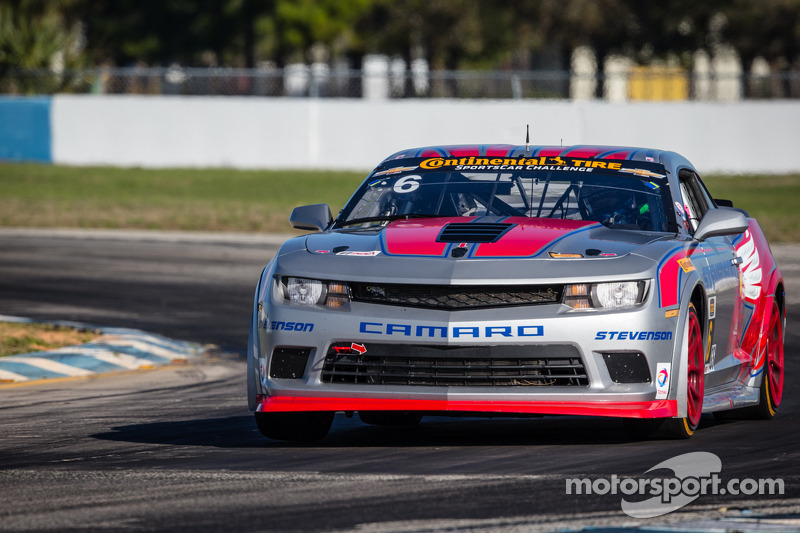 Rained-out qualifying meant a mid-pack start for both

After a rained-out qualifying session forced the two Stevenson Camaro Z/28.R entries to start from the middle of the pack, both Chevrolets fought back to bring home a double top-10 result for the team in the fourth round of the IMSA Continental Tire SportsCar Challenge at Lime Rock Park, including the first podium of the season for the No. 9 Stevenson Camaro Z/28.R.

Davis took the green flag under unexpectedly clear conditions for the No. 6 car with Bell right behind in the No. 9. Solid race pace saw both cars consistently work their way up the field as the two teammates worked together through the opening stint.

Traffic kept Davis and Bell from making more forward progress, but ultimately an incident just ahead of the two allowed them to gain position and steer clear of slower traffic for the remainder of their stints.

After Bell piloted the No. 9 up to third place with the No. 6 not far behind in fifth, both cars pitted for a full service of tires, fuel and driver change at the 1-hour mark. Thanks to excellent work by the crew, the team cycled back out into the field in almost exactly the same positions in which they started the race, prepared to run to the front again.

With Liddell steering the No. 6 and Lally behind the wheel of the No. 9, the 2.5-hour race featured only one full-course caution which fell with just one hour remaining.

When the yellow was displayed, the No. 9 car of Andy Lally was at the tail end of the lead lap. Stevenson Motorsports called him to pit lane when the pits opened and the No. 9 Camaro Z/28.R received four new Continental Tires and returned to the track in fifth position.

The No. 6 Camaro Z/28.R was a lap down at the time of the caution and a quick strategy call from Stevenson Motorsports saw Liddell stay out and receive the ‘wave around’ and return to the lead lap. But the short yellow period did not provide enough time for a full service pit stop with fresh tires and so Stevenson fueled the car and sent it back out with Liddell just barely returning to the track before the pace car came back around.

The last half hour of the race saw the sky threatening rain and Liddell and Lally carefully and steadily progressed up the through the pack. An exciting battle in the final minutes of the race saw the experienced Lally navigate the No. 9 Camaro Z/28.R to his first podium of the year with co-driver Bell and the Stevenson Motorsports squad.

“We struggled in the first half of the race, we kind of got stuck behind some Mustangs and couldn’t go anywhere,” said Team Manager, Mike Johnson. “Then everyone pitted under green and our stops weren’t quite as good as they have been in the past so we lost just a little bit of time there. But the cars were running better and we got really lucky with that yellow. We had one car almost a lap down and another one that was right at a lap down so we were fortunate to get the wave-by. And a lot of the cars that took the wave-by took tires and we didn’t, so since we didn’t do that we didn’t get stuck behind the pace car and that kind of secured our fate. Andy did a great job, he passed two cars and went from fifth to third in that final stint and that’s the best finish of the year so far for the No. 9 car so I’m happy, although we still have some work to do.”

The Stevenson Motorsports team now looks forward to a short break in action before they head to Kansas Speedway for Round 5 of the IMSA Continental Tire SportsCar Challenge on June 6-7.

Driver Quoteboard: Andy Lally, No. 9 Stevenson Motorsports Camaro Z/28.R – “It was quite a battle out there. As usual in any Continental Tire Championship series there is always a battle for the win. Especially here at Lime Rock, and to get on the podium here is an accomplishment regardless. For me it is an honor to get my first podium with Stevenson Motorsports and this Camaro Z/28.R. I have to hand it to the crew for doing great pit stops and my teammate for having a great first stint. When it is a race like today and there is only one yellow, it really does come down to teamwork and what every single person has done on the team. And honestly, that is where Stevenson Motorsports shines and they will always end up on the podium because they are that good. So I just got to be the guy to take it home and finish it and have a really fun battle there at the end with Buford and Hindman, so it was a good race.”