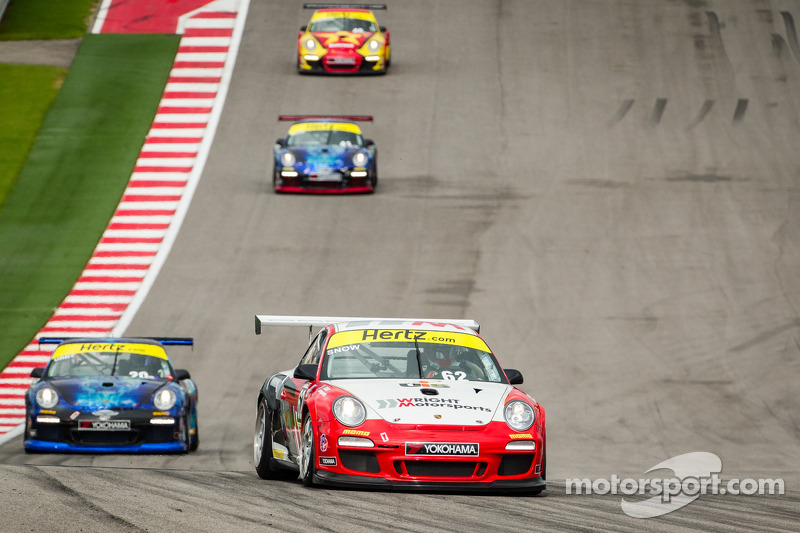 AUSTIN (Sept. 21, 2013) - Weather conditions for Race Two at Circuit of the Americas (COTA) were much improved for the IMSA GT3 Cup Challenge by Yokohama participants. The Porsche 911 GT3 Cup cars took the 3.4-mile, 20-turn circuit for International Sports Car Weekend in the Texas heat and whipping wind. With Yokohama tires firmly underneath them and fans filling the stands, the Porsche GT3 Cup drivers put on a show in their debut weekend at the lengthy Lone Star State circuit.

From the first turn of the first lap drivers were fighting for every inch of the immaculate circuit. EFFORT Racing's Michael Mills made a bold move in Turn 1 to overtake polesitter Madison Snow for a quick lead. Mills and Snow then exchanged turns at the lead as Mills would beat Snow in the entry of a corner, only for Snow to regain the lead coming out again. Sloan Urry was also in the Turn 1 mix, but made it through safely to duke it out with Mills and Snow.

Before the completion of Lap 1, Snow made his way around the EFFORT Racing drivers to take the start/finish line for the first of 21 total laps. The Snow Racing/Wright Motorsports driver posted a fast lap of 2:13.883, besting the new track record time set by Angel Benitez Jr. yesterday.

"The race was great," Snow said. "At the beginning I pulled away I thought it was going to be an easy race, was doing all I could, and all of the sudden Sloan was starting to catch me and I was trying to push harder and harder. I was real fast at times and I was pulling away at times. All of the sudden I looked back and he was gone. He ran out of fuel or had an issue but it was a great victory."

What Snow thought at first would be an easy runaway race, turned to be tighter than he thought as he noticed the sparkling No. 20 entry of Urry in his mirrors. EFFORT Racing, based in Angleton, Texas, came to play hard ball this weekend. The team did not disappoint friends, family and coworkers who came out to support them. Snow led the field the entire race, but Urry gave it his all until the final lap.

"It's great to get on the podium for EFFORT and their home crowd," Urry said. "We had a big cheering section, so it's awesome to be able to put it together for them. Second place is good. We had a run for first, but unfortunately I ran out of fuel the last couple laps."

Typically a battle that ends only four tenths apart would be the main battle of the day, but in Race Two of International Sports Car Weekend it seemed every driver had mirrors behind him he was trying to keep back. The fight between Mills and Brett Sandberg ended with four tenths between the two, after countless laps of nose-to-tail driving.

For laps two through 13 Mills stayed ahead of Sandberg, but by Lap 14 the pressure got to him and Sandberg took over for three laps. By Lap 17 Mills regained the lead within the battle and brought it home to the checkers.

"It was a great race," Mills said. "I love racing with Brett. He's so clean. It's professional, we can really battle each other out. It makes it entertaining and fun. Just glad to get on the box. I'm glad Sloan was able to get on second. So happy for EFFORT to get a podium in front of family and friends."

Craig Duerson of NGT Motorsport and Colin Thompson of Thompson Racing duked it out for fifth position. Duerson ultimately prevailed, but only three tenths ahead of youngster Thompson.

Slightly further back in the pack was a photo finish between John Baker of Wright Motorsports and David Baker of Topp Racing. The Masters drivers finished with only four thousandths of a second separating them.

Entering the final rounds of the 2013 season, Snow has unofficially clinched the series title. Following Round 14 at COTA, Snow has accumulated 226 points, with the next closest driver - Sloan Urry - tallying 182. Pending official results, it is mathematically impossible for any driver to surpass snow in the final two races at Road Atlanta.

Gold Cup driver Michael Levitas has officially clinched his class, and remains smiling from ear-to-ear truly enjoying the sport as the 2013 season comes to a close. Today Levitas was bested by Formula Motorsport's Miguel Benitez. Benitez turned the fastest lap of all Gold Cup drivers with a time of 2:18.464, good enough for a new track record at the 3.4-mile, 20-turn circuit.

Levitas took the second step next to teammate David Williams of TPC Racing, finishing in third.

Michael Levitas: Second Place Gold Cup
"Great race. I was glad that Miguel was there. My partner David did a great job driving in there. I'll tell you what the Yokohama tires are amazing. I started on a set of tires from Baltimore and I was able to turn almost the same lap times as the leader. It was a great race. Exciting track.

David Williams: Third Place Gold Cup
"It was awesome. Great in the rain and great in the dry so a great day for TPC Racing."

The Porsche 911 GT3 Cup cars are back on track Oct. 16-19 for the season-ending event at Road Atlanta. For updates on the 16th Annual Petit Le Mans, visit our series website, Twitter and Facebook pages.

The stakes could not be any higher for Platinum Cup Masters championship contenders Kasey Kuhlman and Craig Duerson. With a sweep of both races at COTA, Duerson evens the score between frontrunner Kuhlman in the points standings. Both drivers have now posted 237 total points this season entering the season finale event at Road Atlanta.

With today's victory, Duerson secures his eighth win of the season. Kuhlman finishes third, grabbing much-needed points to keep him in the battle with Duerson. Entering this weekend, Kuhlman had a 14-point lead over Duerson.

In the middle of the top two Masters drivers was Patrick-Otto Madsen of Ansa Motorsports. Madsen earned his second podium finish of the season in the heart of Texas.

Craig Duerson: First Place Platinum Cup Masters
"It was a good race. I had an entertaining battle in front of me with Mills and Sandberg so everybody drove a clean race. So hats off to all the competitors here. It was a great event here. I'm happy with my results, I came out with two Masters wins here so it was a good weekend."

Patrick-Otto Madsen: Second Place Platinum Cup Masters
"I had a good pace out there. I was keeping up with several guys. Me and Colin had a real battle there and at that level every tenth counts and I was really trying to push as hard as I could every lap. I'm really happy where I finished.

Kasey Kuhlman: Third Place Platinum Cup Masters
It was a good run for me. I started 14th and ended up 8th overall and recovered in the Masters to get onto the podium and salvage some desperately needed points to Craig who's had a great weekend. I feel really good.