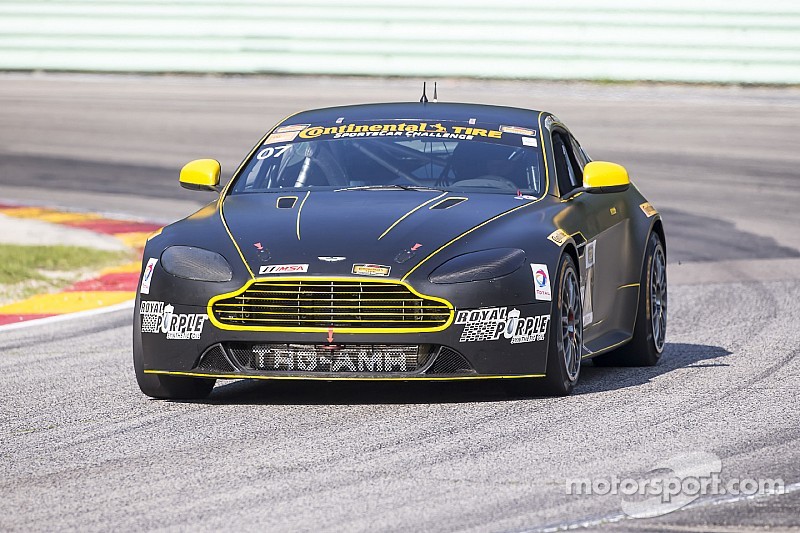 Wilson won by 0.242 seconds in the No. 07 TRG-AMR Aston Martin Vantage started by Max Riddle, who missed the team’s first triumph at Kansas Speedway in June.

“Max handed me the car in perfect shape,” said Wilson. “I saw Robin coming, and I knew he was coming from the back. He raced me clean, and I knew he had more to lose than me, because he’s in the points and we’re not. I took the inside line in every corner.”

“Andrew did a heck of a job,” Liddell said. “We made the unusual call to keep Andrew in the car for a second stint. He was running without a cool suit on a hot day. I was behind the Aston for about the last half hour. I was attacking while trying to conserve fuel at the same time. I was hoping to get him at the end of the back straight, but I couldn’t get the drive off the corner. Kris did a fantastic job, well done.”

Kyle Marcelli and Martin Barkey took third in the No. 08 Rebel Rock Racing Porsche 911 for their best finish of the season.

Trent Hindman entered the race with an eight-point lead in the GS points, but the No. 46 Fall-Line Motorsports BMW M3 encountered alternator and battery problems. John Edwards brought the car home in 12th, and Hindman now unofficially trails Liddell and Davis in the standings, 263-261.

Eric Foss and Jeff Mosing combined to take their first Street Tuner (ST) victory since winning the opener at Daytona. They combined to win in the No. 56 Murillo Racing/Mosing Motorcars Porsche Cayman that the team debuted one race ago at Road America.

Combined with Wayne Nonnamaker’s fourth-place finish in the No. 42 Team Sahlen Porsche Cayman started by Will Nonnamaker, Foss gained a share of the lead in the topsy-turvy ST class.

“The key today was managing the car and the fuel,” Foss said. “The Murillo guys pulled off a perfect pit stop, and that kept us up front. It’s nice to be leading the points, but there are still tough races to go and anything can happen in this series.”

“I was able to take the lead in Turn 1, and from there I put my head down and built up a comfortable lead,” Mosing said. “My main concern was running consistent laps.”

“It was a hot day, and our drink bottle and radios weren’t working,” Ruscitti said. “That made it real difficult for us. We wanted to win, but I don’t know if we could have got them. It feels real good, though, to get back on the podium.”

Defending ST champions Terry Borcheller and Mike LaMarra were awarded third in the No. 23 Burton Racing BMW 128i after the No. 81 BimmerWorld BMW 328i of Greg Liefooghe and Tyler Cooke was excluded when post-race technical inspection revealed that the No. 81 exceeded maximum fuel capacity. The same penalty also was applied to the No. 75 Compass360 Racing Honda Civic Si, which originally finished fifth.

The race was slowed by only one caution period, which came 30 minutes into the race for Ted Giovanis, who went off in Turn 1 in the No. 64 TGM BMW 328i.

The next race for the Continental Tire Challenge will be at Austin’s Circuit of The Americas on Friday, Sept. 19.