Having suffered with a lack of grip during qualifying on Saturday (3 May), the situation had improved dramatically for Sunday morning’s free practice and gave 8Star a very real chance of fighting for the LMPC win in the weekend's headlining two-hour Monterey Grand Prix.

Luis Diaz was called up for the opening stint, jumping from third to second position at the start and proceeding to challenge for the class lead.

The Mexican pushed on and, 16 minutes into the race, snatched the initiative from RSR Racing’s Duncan Ende, which he kept for the duration of his run before handing 8Star’s #25 ORECA FLM09 prototype to teammate Sean Rayhall.

After a swift driver-change, Rayhall recorded consistently strong lap times while continuing in first place, until a pit stop dropped him to fifth behind Renger van der Zande in the Starworks Motorsport entry, commencing what would become the main fight for victory.

Brazil’s Bruno Junquiera featured at the top, but an opposing strategy would play against him and his RSR Racing team, a pit stop during a long green period ultimately taking him out of contention for the top spot. 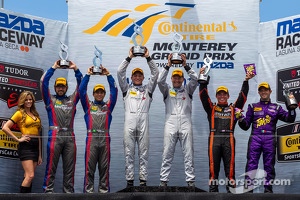 Rayhall, meanwhile, pushed hard and had incredible speed, getting within three seconds of LMPC class leader Van der Zande before spinning with only ten minutes to run.

This forced 8Star Motorsports to go defensive in a bid to preserve its second position against RSR’s Junqueira, who reduced the gap to Rayhall to less than five seconds on the final charge to the flag.

“The changes made after qualifying made the 8Star Motorsports ORECA feel much better and I knew we had a really good car going into the race,” said Diaz. “The goal was to achieve a podium finish for our new sponsor, Takis, and everyone at 8Star. Sean (Rayhall) had done a great job all weekend and we was in a position to fight for the win, if everything went well.

“In the end, I think we did everything we could. Our strategy didn’t help us and the yellow flags were definitely not beneficial to us, but the team did a great job in the pit stops, making no mistakes, and, while Sean tried to pull off a pass that didn’t work, I think that was the way to play it – he carried great momentum. I am really happy and this is a great result for 8Star Motorsports and Takis!”

Rayhall concluded: “It has been a fantastic Job by the 8Star Motorsports crew to get the Takis-backed ORECA FLM09 out in front. Contact with a GT car ultimately cost us a shot at victory, but I was able to recover and finish second. I’m really thankful to 8Star and Takis, as this was our first time at Laguna Seca and we got a great result.”