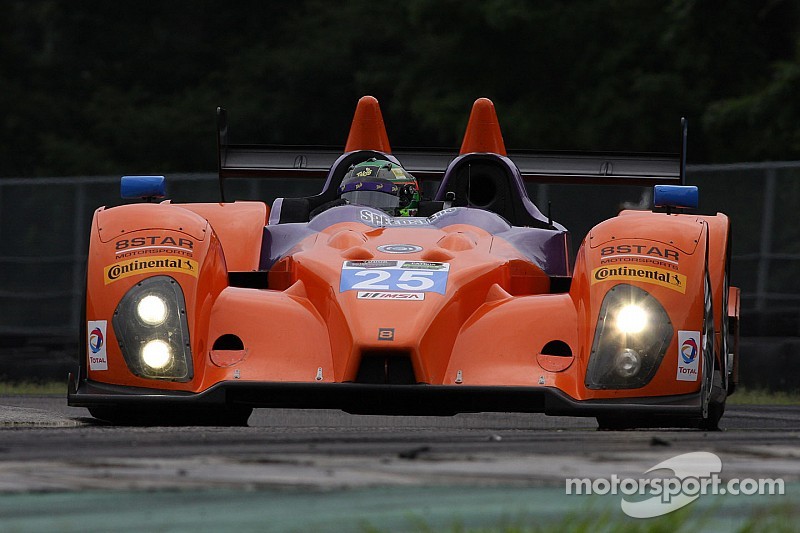 The PC racers were the stars with the prototypes not present this weekend.

Luis Diaz took over where teammate Sean Rayhall left off at Virginia International Raceway, leading every lap of Sunday’s 45-minute Prototype Challenge (PC) segment to give the No. 25 8Star Motorsports Takis/Speedsters ORECA FLM09 the overall victory in the TUDOR United SportsCar Championship event.

Rayhall led all 23 laps in Saturday evening’s segment, while Diaz led 24 laps on Sunday, holding off the efforts of Bruno Junqueira, Colin Braun and Renger van der Zande, who each took turns in second. The event ended under caution following a late incident involving Junqueira, who spun and made contact with a tire barrier in Turn 7.

I’m not very good with math, that’s why I’m a race car driver

Combined points from the weekend’s two segments determined the final results for the eighth PC race of the season.

“My plan was to stay out front,” Diaz said. “I’m not very good with math, that’s why I’m a race car driver. I knew I didn’t have as fast of a pace as the other guys, so I couldn’t make any mistakes. I had a lot of pressure on me, I was playing the game of not looking in my mirrors. I was thankful the yellow flag came out. I knew Colin was stronger than me, and we didn’t have to fight against this good driver.”

Braun finished the segment in second in the No. 54 CORE autosport ORECA FLM09 started by Jon Bennett, who finished seventh in the opening segment. Renger van der Zande took third in the No. 8 Starworks Motorsport Martini entry started by Mirco Schultis, who was eighth on Saturday.

“They certainly had a good car, a fast car, and hats off to them,” Braun said. “Guys who finished second always say if they had more green flag running we would have had a shot at them at the end. It would have been fun to race Luis at the end, but that’s the way it goes. It was certainly exciting racing.”

Diaz led Junqueira for the opening 14 laps, before Junqueira spun in the No. 09 RSR Racing Linospresso USA entry driven to second by Duncan Ende on Saturday. Braun then ran second for several laps, but lost the position to van der Zande while challenging Diaz in the Oak Tree Turn.

It was a real bullfight, a sprint race, and I enjoyed it

Van der Zande had an off-course excursion of his own three laps later, with Braun moving to within a half-second of the lead before the final caution.

“It was a real bullfight, a sprint race, and I enjoyed it,” said van der Zande, a two-time winner in 2014 competition. “My fight for the lead was amazing – all fair and clean, with a little paint exchanged.”

In the combined final results, David Ostella (fifth on Sunday) and James French (third on Saturday) finished second in the No. 38 Performance Tech Motorsports ORECA FLM09, followed by Braun and Bennett.

“James did an awesome job going from seventh to third yesterday, but I struggled with the car today,” Ostella said. “I can’t complain about second overall. It’s our best finish of the season. Hopefully we will get it one better at the next one.”

The next race for the PC competitors will be at Circuit of The Americas in Austin, Texas, with all four TUDOR Championship classes featured on Saturday, Sept. 20.