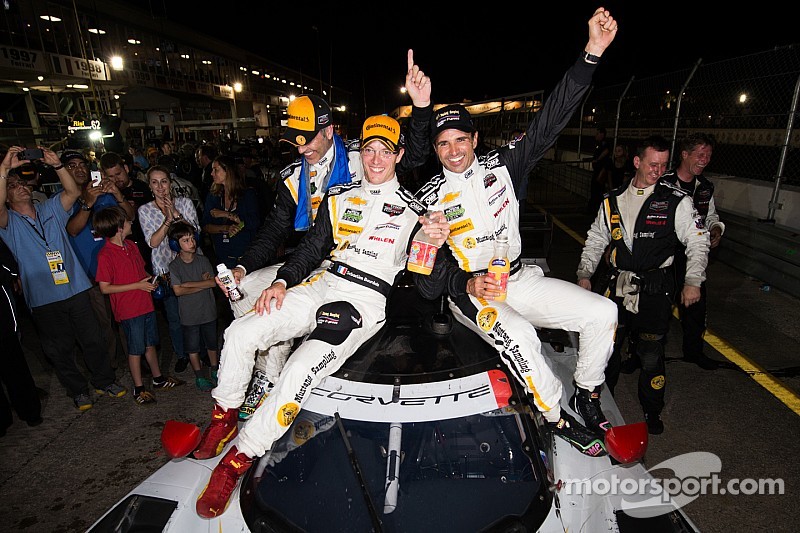 Jim Hall II opened the day by running exhibition laps in the Chaparral 2 his father and Hap Sharp drove to victory in the 1965 event. The Action Express trio then took over, teaming for a dominant victory, becoming the first TUDOR United SportsCar Championship team to lap the field. They led 246 of the 340 circuits, including every lap after Barbosa passed Scott Dixon to take the lead at the seven-hour mark.

Action Express Racing has also completed every possible lap in TUDOR Championship competition, totaling 3,257 laps for 10,415 miles. It was the fifth Prototype (P) victory for defending champions Fittipaldi and Barbosa.

We’re very proud to see Chevrolet and Corvette go up alongside so many famous marques that have won this race.

The race was slowed by only six caution periods for one hour, 58 minutes under the yellow, including a green-flag run of nearly four hours midway through the event.

The roles were reversed from the Rolex 24 At Daytona in the Prototype Challenge class. While PR1/Mathiasen spent most of the season-opening event chasing CORE autosport – pulling out the victory when misfortune struck their rival in the closing minutes – Sebring saw the team dominate the event.

The No. 54 CORE autosport Flex-Box ORECA FLM09 trio of Colin Braun, Jon Bennett and James Gue was looking to repeat as winners at Sebring. Braun closed to within a second of Kimber-Smith during the final hour, but the British driver was able to regain momentum and win by 11.614 seconds.

· Barbosa of Portugal and Fittipaldi of Brazil became the first drivers from their respective countries to win overall at Sebring.

· Action Express Racing won two of the three segments and took over the overall lead in the Tequila Patrón North American Endurance Cup. The No. 5 Mustang Sampling Corvette DP totaled 14 points in the three segments, and now leads the No. 01 Chip Ganassi Racing and No. 10 Konica Minolta Corvette DP by six points, 27-21. PR1/Mathiasen Motorsports won all three PC segments to take over the class lead by one point over CORE autosport, 30-29.

· Olivier Pla started on the pole in the No. 57 Krohn Racing Ligier JP P2/Judd and dominated in the early going. However, the car sustained front-end damage and a loose muffler when Tracy Krohn was tagged by a car exiting the pits. The team lost four laps making repairs, and was unable to make up the deficit despite turning competitive laps, eventually finishing eighth overall and sixth in the P class.

· The next TUDOR Championship race will showcase the Prototype and GT Le Mans classes in the Grand Prix of Long Beach on Saturday, April 18.

· A two-hour highlight program will be aired Sunday morning on FOX Sports 1, beginning at 8 a.m. ET.

Jim Campbell, Chevrolet U.S. Vice President, Performance Vehicles and Motorsports: “To think that in 1965, a Chaparral – which had Chevy power but was prepared by Jim Hall in the Prototype category – won this race overall. Here we are, 50 years later, and our Corvette Prototypes of the modern day got an overall win. That’s very special. We’re very proud to see Chevrolet and Corvette go up alongside so many famous marques that have won this race.”

Christian Fittipaldi, Driver – No. 5 Action Express Mustang Sampling Corvette DP: Definitely, it’s very important for the team. The teamwork starts back at the shop. It doesn’t start on Friday morning. Basically it’s back at the shop. When we left Daytona, we didn’t have the pace on track, and we made a couple of mistakes in the pits. We went back to the shop and analyzed everything we did. I think it went quite well. It’s awesome man. To be able to complete every single lap out there is more than just us drivers, it’s the whole team. We’re always trying to improve no matter what we’re doing. If we don’t improve, we learn how to minimize our mistakes. If we do that, it will pay off at the end of the year.”

Joao Barbosa, Driver – No. 5 Action Express Mustang Sampling Corvette DP: “It was very special to check this one off the list. We couldn’t have done it without a flawless car. It’s pretty amazing what our guys are doing at the shop to give us this car. The car was consistent, it was still improving over the length of the race.”

Sebastien Bourdais, Driver – No. 5 Action Express Mustang Sampling Corvette DP: “This is a place that’s been pretty mean to me many times. I remember losing here with Peugeot when we got a puncture with just two hours to go. Winning in Prototype with a lap on the field – on pace – doesn’t happen very many times.”

Mike Guasch, Owner/Driver – No. 52 PR1/Mathiasen Motorsports Cuttwood/Spyder ORECA FLM09: “We started at Daytona and won it. It was a tough race there. This one we came in a little more confidently. We don’t want to be overly confident, but we felt it was our race to lose. We were pretty much in control of it the entire race. It was tight, but it was our race to lose. My first stint was more than three hours, and I led quite a bit myself, which was really nice. We had no mechanical issues whatsoever. It worked a little better in the cooler weather, and in the evening, it just came alive. It was awesome.”

Conor Daly, Driver – No. 38 Performance Tech Motorsports ORECA FLM09: “I’m just happy to be here. It was cool to finish off my first stint in the lead by a lot. (Team owner) Brent (O’Neill) called me up last Thursday. He needed a driver, and I was definitely ready to come. I’d love to do more races – I’d love to do the season. My dad (two-time Sebring overall winner Derek Daly) isn’t here – he’s busy back home.”