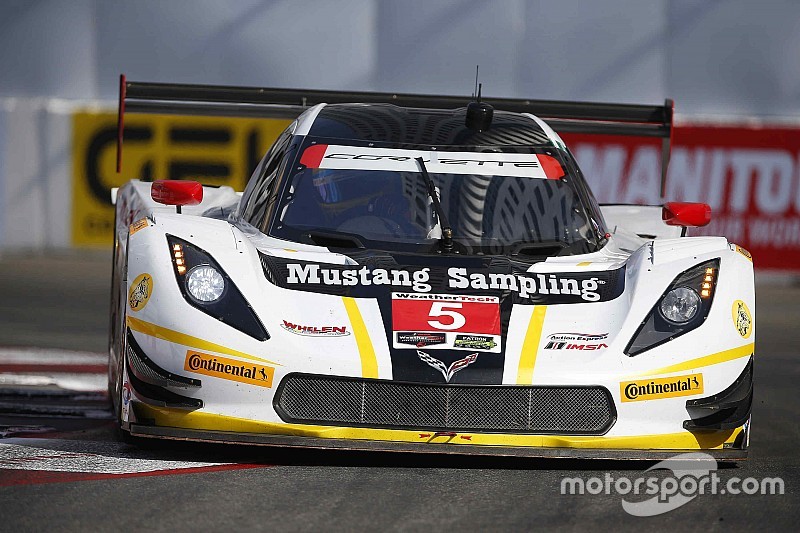 Christian Fittipaldi headed up a Corvette Daytona Prototype 1-2 in qualifying at Long Beach, while Bill Auberlen scored a spectacular pole for BMW in the GTLM class.

Fittipaldi’s 1min14.962sec pole time in the #5 AX Racing Corvette came on his fifth lap, and gave him a 0.17sec margin over Ricky Taylor, who threw in his fastest run on his last of nine laps in the #10 Wayne Taylor Racing entry.

Tom Long continued Mazda’s welcome pace this weekend with third fastest in the Prototype that supposedly was unsuited to the bumps of a street course. Long was 0.7sec off the ultimate pace but that was enough to beat the second Action Express car, driven by Eric Curran.

A spin for Marc Goossens’ Visit Florida Racing Corvette DP at the final hairpin briefly brought out the red flags as he stalled nose-first into the inside wall. He wound up seventh fastest.

While the #90 sat stationary on track, he was nudged by Tristan Nunez in the #55 Mazda which in Jonathan Bomarito’s hands had been a surprising fastest in this morning’s two-hour practice session. But Nunez’s best held up for P5, 0.16 ahead of the DeltaWing piloted by Andy Meyrick.

Bill Auberlen set pole with a 1min17.272sec lap in a thrilling GT Le Mans session, his BMW M6 keeping Earl Bamber’s Porsche 911 RSR off top spot by a mere three-thousandths of a second, despite Bamber completing 12 laps to Auberlen’s eight.

The second Porsche of Patrick Pilet was less than 0.2sec behind, doing just enough to eclipse the Corvettes of Oliver Gavin and Jan Magnussen.

Lucas Luhr was sixth quick in the second BMW, while Joey Hand was a respectable seventh - 0.85sec from pole - in the lone Ford GT, a car which had not encountered Long Beach before this weekend.

The second Ford, which suffered an engine fire this morning, did not participate in the session.

Prototype Challenge will roll off in championship order, as their session was curtailed by a shunt which meant they didn't meet the required 10-minute minimum.

However, championship leader Misha Goikhberg who caused the shunt will thus start at the back.

Until the accident, James French was the only driver able to pedal his PC car fast enough to mix it with the GTLM class. The Performance Tech Oreca posted a 1min17.910sec lap, some 0.7sec quicker than the next fastest in class, Jon Bennett’s CORE autosport entry. Third fastest was Robert Alon for PR1/Mathiasen Motorsports, with Misha Goikhberg going P4 for JDC-Miller Motorsports.

Magnussen hunting more success on the streets of Long Beach