Action Express Racing will look to become just the fifth team in history to win both the Rolex 24 At Daytona and the 12 Hours of Sebring in the same year.

Denver, N.C. – When Action Express Racing enters the legendary gates of Sebring International Raceway this week, the Rolex 24-winning team will have one goal in mind: to win. The group would make history as the first winners in a Daytona Prototype in the historic Mobil 1 Twelve Hours of Sebring Fueled by Fresh From Florida as the IMSA TUDOR United SportsCar Championship debuts at the fabled road course. 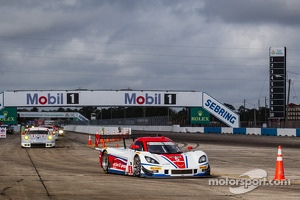 The reigning Rolex 24 Champions carry big momentum into what is considered to be the most challenging event on the 2014 IMSA schedule. Not only did the team open the season with the huge Rolex 24 win, but Action Express Racing also set the pace in both IMSA tests held at the 3.74-mile Sebring circuit.

The Rolex 24-winning trio of Joao Barbosa, Christian Fittipaldi, and Sebastien Bourdais return to the seat of the No. 5 Corvette DP and Action Express drivers Burt and Brian Frisselle are set to team in the No. 9 Corvette DP with Jon Fogarty.

Action Express took a double podium finish at Daytona and targets the same result at Sebring. The team took little time to celebrate the big Daytona result and went straight back to work with a focus on Sebring. Those preparations were evident when the team led the IMSA-sanctioned Sebring test just a few weeks ago and the always driven squad will continue those efforts this week.

Motivation to win for the team is even higher as the No. 5 car looks to become just the fifth in history to win both the Rolex 24 and Sebring 12 Hour races in the same year. Burt and Brian Frisselle also have a strong ambition to win. Their father Brad won the overall race in 1977 and the duo looks to extend the Frisselle family legacy with another overall win in the 2014 running of the event.

As two cars and one team, the sister Action Express Racing Corvettes will as always unite and work together at the challenging and bumpy circuit in an effort to achieve the group’s winning goal.

“We have two very good driver line-ups and we’ve been preparing just the same as we always do back at the shop,” said Team Manager Gary Nelson. “This track is probably the toughest one we’ll go to all year. There is a lot more opportunity for trouble at a track like this versus at Daytona where most of the track is pretty wide. We treat the banking of the NASCAR portion at Daytona as a straightaway because you’re flat out. But here, you are constantly going through turns. The turns are where trouble usually happens especially with so many cars on the track. Our goals are to have a fast car, stay out of trouble and to be in contention at the end.”

Five of the Action Express Racing drivers have experience in the historic 12 Hours of Sebring and three hold class wins in the event. Barbosa and Burt Frisselle each won in 2012 with Barbosa winning in P2 and Frisselle winning in PC. Sebastien Bourdais won in 2006 in the LMGT2 category. Fogarty has five top-five finishes in five starts in the Sebring 12 Hour including two runner-up finishes (2012 in P2, 2006 in LMGT2). Fittipaldi made one start in 2008 and placed sixth.

Brian Frisselle will make his debut in the event this year and with experience at the track in his Star Mazda and Skip Barber days as well as soaking in information from his brother Burt as well as from his father who is a two-time winner of the event, Brian is fully prepared to take on Sebring this weekend.

The cars will take to the track for the first time on Thursday for three practice sessions throughout the day including a 1 ½ hour night practice beginning at 8:00 PM (ET). Friday will see a fourth practice at 9:55 AM (ET) with a 15-minute qualifying session scheduled for 5:15 PM (ET). The Mobil 1 Twelve Hours of Sebring is set to go green at 10:15 AM (ET) on Saturday.

Joao Barbosa, No. 5 Corvette DP: “We’re going to follow the same strategy that we did at Daytona. But if we thought it was difficult in Daytona, Sebring is going to be three times as hard. With 67 cars, at Daytona at least we had the long straights to go around other cars, but here we only have the one straight and it’s quite short. It’s going to be an even bigger challenge for the drivers to stay clean until the end of the race. Even though it’s half of the time of the 24, it’s going to be twice as hard. It’s going to be difficult but the farther forward you are, the better it is. So our plan is the same, just be at the front and try to lead as many laps as we can and achieve the same result at the end.”

Christian Fittipaldi, No. 5 Corvette DP: “In order for us to repeat what we did at Daytona we have to first finish the race. That is our main goal. Complete the 12 hours, go the distance and I think if all of that happens and we have a relatively trouble free race, according to the lap times and how the car feels I think our chances of being up at the front again are very good. There is only so much that we can control during the race though so hopefully we just keep it clean and stay out at the front just like we did at Daytona.”

Sebastien Bourdais, No. 5 Corvette DP: “The car is very good. It looks like our cars are pretty strong at Sebring based on the two tests but the race is going to be a big challenge. At the test we had about 25 cars on track, but in the race we’ll have over 60 and that’s going to be a lot of cars on track at the same time. Traffic is going to be the most critical thing – just like at Daytona but much harder. The car is very good and we’ll just keep working on our program and see what we can do.”

Burt Frisselle, No. 9 Corvette DP: “I am very excited to get to Sebring and to get to work on winning such a historic event. Obviously when you are approaching long endurance races the key for success is consistency. Action Express has worked extremely hard to prepare for this event and having been the quickest car in the two tests, you show up knowing that you are going to have the opportunity to win. So consistency and smart decision making in what will surely be extremely difficult traffic conditions will determine our fate. When I won in class in 2012 I don't think we had a scratch on the car, and I think that was crucial. This year though to fight for the overall win is so special and to know that my father is part of that history and my brother and I have a chance to join him makes it even more meaningful. He and my mother are going to be there to cheer us on and nothing would be more thrilling then having a family photo in victory lane!”

Brian Frisselle, No. 9 Corvette DP: “I can’t wait to get going for my first 12 Hours of Sebring. It is an awesome endurance event that takes place at a track with a lot of history and character. I know I got my first taste of the magic of sports car racing at night when watching night practice from Turn 1 at Sebring. It would mean the world to me if I were able to join my Dad as an overall winner, over 30 years later, alongside my brother. We fell just short of or goal of finishing 1-2 at the Rolex 24 and we will be looking to achieve that goal going into the historic 12 Hours of Sebring!”

Jon Fogarty, No. 9 Corvette DP: “It’s a physical event – a demanding track on both driver and car and it really beats you up. I’ve just been maintaining my fitness level and that’s first and foremost. I‘ve done the race in a GT car and I’ve done it in a prototype. I’m glad to be doing it in a Daytona Prototype. The cars are robust and have the best opportunity to take advantage of traffic so you’ll still have to be careful but not having to constantly look in my mirrors like I have in the past will be nice. This race will be highly competitive. The prototype category is going to have more competition from the former P2 cars. The track suits them more than it did at Daytona so we’ll just get out there and run clean. Staying trouble free in this race is key.”

Triple duty for Al Carter at Sebring this week!