Sebring, Fla. - Making their first start in the TUDOR United SportsCar Championship, AIM Autosport scored its first podium as the no. 555 AIM Autosport Ferrari 458 Italia took the checkered flag in second place at the end of Saturday's Mobil 1 12 Hours of Sebring.

It was the second straight podium for Townsend Bell, Bill Sweedler, and Jeff Segal who scored the victory at January's Rolex 24 at Daytona. This weekend, they were joined by Italian Maurizio Mediani, as the AIM Autosport program came together only weeks before Sebring. 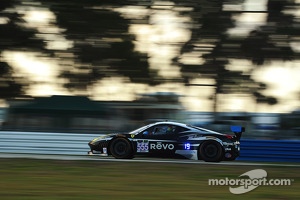 From the drop of the green flag, the no. 555 AIM Autosport Ferrari 458 Italia - which was qualified in seventh position by Bell - consistently ran inside of the top five, leading a large portion of the middle of the race. As the race spent over five hours under caution for multiple on-track incidents, the drivers of the no. 555 kept their Ferrari away from the carnage and in the battle for the race win.

In the final hour of the race, the team opted to pit for fuel at an early opportunity to ensure that the no. 555 AIM Autosport Ferrari 458 Italia would make the distance. Shortly after, a full course caution negated that strategy for Bell, who was behind the wheel for the final stint. Taking the green flag in second place, Bell was able to preserve the position and hold off the challenge of a pair of Porsches in the closing minutes to finish on the podium.

We decided to be conservative, go for a splash, and the yellow came out right away which was unfortunate," said Bell. "But we fought back, held them off, and finished second. At that point the tires were pretty worn out and we added weight to the car relative to our competition, so we just had to make the most of what we had. For a program that was pulled together at the last second, to come out of here with a second was more than we could have hoped for, so I'm very pleased. Starting the year with podiums at Daytona and Sebring is not too bad!"

Sweedler was quick to thank his team and teammates after he, Bell, and Segal nearly completed a double-win of the Florida endurance classics.

"Townsend, Jeff, Maurizio were great teammates and frankly, without Ian Willis, none of this would have come together," said Sweedler. "He's an amazing operator and I'm thrilled to be part of the AIM Autosport team. We are leading the NAEC and the GT-D points championship so we are excited about that. Frankly, the Ferrari is just the best balanced platform in the series and the Continental Tires were excellent. Sebring is always a little bit crazy with traffic. I am so excited to be a part of this series that Jim France has put together, merging the ALMS with GRAND-AM. I pinch myself when I am out there."

AIM Autosport will compete next in the Continental Tire Monterey Grand Prix on May 3-4 at Mazda Raceway Laguna Seca in Monterey, Calif.