AIM Autosport on the offensive in a challenging weekend in Virginia 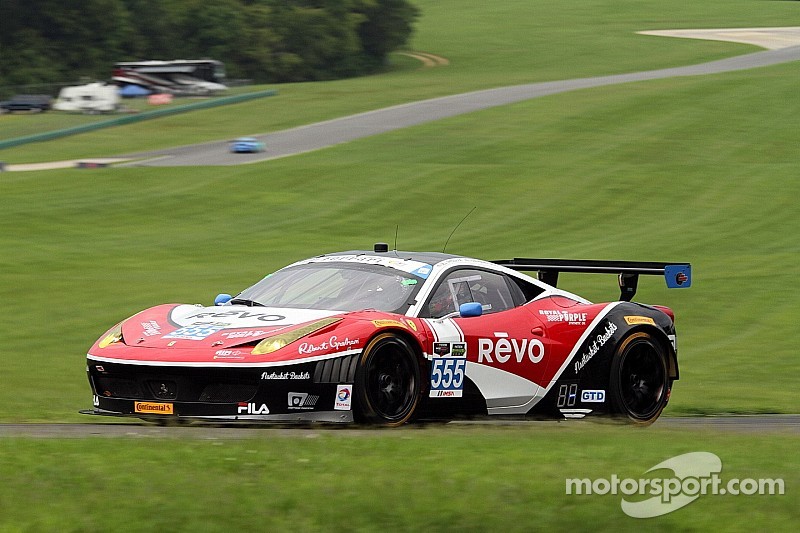 Despite incidents and penalties, Sweedler and Bell have speed and leave VIR with shared points lead.

Entering the Oak Tree Grand Prix, AIM Autosport drivers Bill Sweedler and Townsend Bell had a narrow lead in the GT-Daytona driver's championship. After a challenging weekend, the duo would leave with the championship lead but now share it with three other drivers.

The race - which summarized the weekend in a nutshell - was an up-and-down affair. A pair of penalties would ultimately conspire to cost the no. 555 AIM Autosport Ferrari 458 Italia valuable track position, and it finished the race in eighth position after the car ran as high as third position.

On one hand, it's pretty frustrating to have two penalties and finish where we did,

It was an unrewarded effort for the drives that were put in by both Sweedler and Bell. An incident in practice meant the wounded Ferrari would only be able to qualify in 14th position, but was made perfect by the time the green flag fell. Sweedler would put in his strongest drive of the season to advance up to fourth position before a penalty for jumping the start - when he broke out of his line before the start/finish line to avoid an incident - would put him well down the order.

Taking over the car, and with an alternate strategy called by the team, Bell was able to move the Ferrari up to third position. In the team's final stop, however, the team would incur a pit equipment penalty and Bell would have to serve a second penalty - a stop-and-hold for 20 seconds. As a result, the car would finish the race in eighth position.

Bell and Sweedler remain in the lead of the championship, but are now tied with Alex Job Racing drivers Cooper MacNeil and Leh Keen and Turner Motorsport driver Dane Cameron.

"On one hand, it's pretty frustrating to have two penalties and finish where we did," said Sweedler. "And we didn't quite lose the lead in the championship, but now there are five drivers tied for the lead which should make for some very exciting racing in the last two races! I think we had a car good for the podium and it was a pure joy to drive. But, all we can do is move forward from here. Based on our pace today and how the team responded from our practice incident, I'm feeling very positive going into our last two races."

Despite seeing his championship lead shrink, Bell remains upbeat as the series heads to Circuit of the Americas and Road Atlanta.

"It obviously wasn't an ideal scenario today," said Bell. "The penalties were really a shame because the team did an incredible job to get the Ferrari not only back on track, but working so well, after the practice incident. The Ferrari was really fast. And the guys gave us a really fast first stop and a great strategy which allowed us to make up the time lost from the first penalty. In fact, the reason we had the second penalty was because they were trying to give us an even faster stop to help us pick up some more track position. We are all pushing very hard to win this championship - and we all will keep pushing for the final two races."

Team engineer Ian Willis, who led an AIM Autosport Ferrari to the Rolex Sports Car Series GT-class championship in 2012, also remained upbeat despite the challenging weekend that VIR dished out to his team.

"We were pretty fortunate that despite everything that happened this weekend, we are still leading the championship - even if we are now in a tie with two other cars," said Willis. "Bill drove what I think was one of his best stints of the year. I'm not sure how I feel about the penalty assessed to Bill, as he jumped out of line to avoid an incident and didn't gain an advantage. Our second penalty was simply the crew pushing very quickly to get an advantage in the pits, and in that respect, I need to put my hand up and take the blame. We are all pushing really hard and the fans should enjoy seeing how the last couple of races play out."

AIM Autosport will continue to fight for the GT-D championship at the series next race at Circuit of the Americans in Austin, Texas on September 19-20.