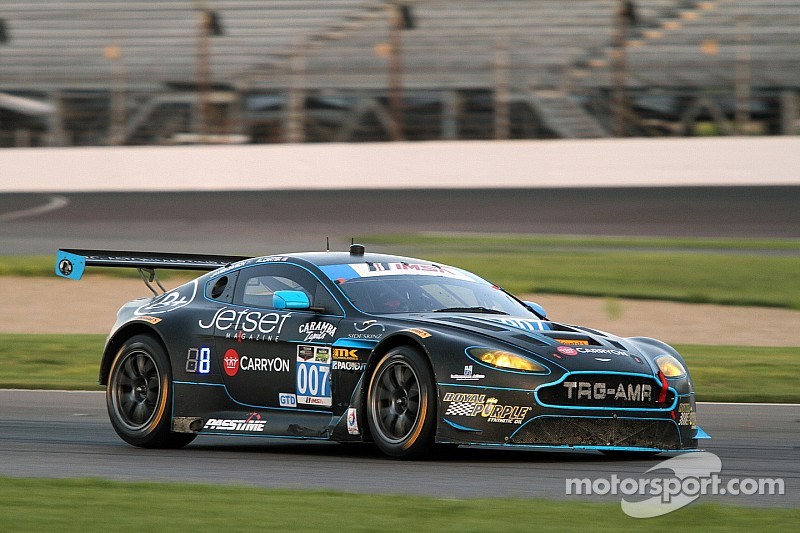 Al Carter and his TRG-Aston Martin Racing team came to Road America to race in the Continental Tire Road Race Showcase with great ambitions. In the first practice session on Friday, the No. 007 CarryOn.com/B+ Foundation/Jetset Magazine/Eagle Tech Systems /Sideskinz/Adobe Road Winery/Royal Purple/Passtime Aston Martin V12 Vantage topped the GTD class with a great run at the end of the session by Al's co-driver, James Davison.

Al Carter and James Davison liked their car set-up and after the next two practice sessions held on Saturday, they knew they had a fast car for qualifying. On Saturday afternoon Davison started the qualifying session and after only one very fast lap, he was able to score the GTD class pole position; the first pole ever for an Aston Martin in the TUDOR Championship and the first for the TRG-AMR this season in the TUDOR series.

Co-driver Al Carter and the entire TRG-Aston Martin Racing team led by Kevin Buckler were very pleased with Davison's performance and everyone was excited about the race.

On Sunday morning the ultimate warm-up session was scheduled at 9:00 a.m. Al Carter started the session behind the wheel of the No. 007 CarryOn.com/B+ Foundation/Jetset Magazine/Eagle Tech Systems /Sideskinz/Adobe Road Winery/Royal Purple/Passtime Aston Martin V12 Vantage. The session was stopped twice and James Davison went for a few laps to make sure everything was OK. In his first lap, Davison was involved in a terrible and unexpected accident with a prototype race car. The accident happened so fast, the car crashed into the wall first, then the barrier. James Davison was very lucky and was able to get out of his car on his own, uninjured. The car was towed to the team's transporter and the crew found out immediately that the car was too damaged and could not be repaired for the race.

Al Carter, James Davison and the rest of the team were really disappointed by the event but there was nothing they could do to change the outcome. Carter and Davison could have made Aston Martin Racing history on Sunday but the gods of racing were not with the TRG-AMR team that day. The two drivers did not start the TUDOR Championship race at Road America.

Al Carter competed last weekend with the No. 7 Rebel Rock Racing/CarryOn.com/B+ Foundation/Eagle Tech Systems/Sideskinz/Stinkerz Porsche 997 in round 9 of the 2014 Continental Tire SportsCar Challenge. Al Carter had a tough time early in the race but was able to recover and pass some cars. Al led the race on lap 23 before pitting for fuel, tires and driver change. Brett Sandberg took over for his stint and he too was able to lead two laps (laps 37-38) since the team elected to change only two tires during the second pit stop.  Carter and Sandberg did everything they could but had to settle with a 12th place finish.