Carter and Davison will be joined by American racer David Block for the four rounds of the North American Endurance Championship (Rolex 24 At Daytona, Mobil 1 12 Hours of Sebring, Six Hours of the Glen and Petit Le Mans). 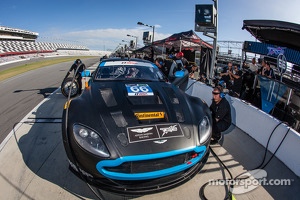 Al Carter competed with success in over 20 professional races last year in the Rolex Series, Continental Tire Series, ALMS and Lamborghini Blancpain Super Trofeo series. Now he's ready to make the move to a full season effort with TRG-AMR, one of the most decorated endurance racing teams in North America.

TRG has a long history of success in the GRAND-AM and American Le Mans Series. It is one of the most storied teams in North American sportscar racing, consistently fielding multi-car efforts in multiple series. Garnering numerous race victories in both former American Sportscar Series, TRG is built on a tradition of winning.

The team has an extensive number of notable sportscar accolades, including victory at the 24 Hours of Le Mans, four wins at the grueling Rolex 24 At Daytona, multiple team and drivers' championships, as well as the record of most wins in GRAND-AM history.

Aston Martin Racing is rich in heritage. It began racing in 1949 and by 1951 the DB2 had swept the podium in class at the 24 Hours of Le Mans, and in 1959 the DBR1 finished one-two overall at the Circuit de la Sarthe. Aston Martin returned to GT racing as a factory team in 2005 with the DBR9 GT1, which went on to record back-to-back victories at the 24 Hours of Le Mans in 2007 and 2008, as well as winning the 2011 FIA GT1 World Championship.

Most recently the formidable new race cars achieved a string of successes, capturing three of the last four pole positions in the FIA World Endurance Championship, a win at the final round in Shanghai, China and finishing second in the World Championship with the GTE machine.

The new Vantage GT3 had an incredible run in its debut year with 18 major victories, and the Vantage GT4 is the car of choice in multiple series worldwide. Today, Aston Martin Racing continues its tradition with the advent of TRG-AMR North America, proudly taking the reins of its North American motorsport operation.

Al Carter's new season teammate, James Davison, moved to the United States from down under to develop his skills in open wheel racing. He competed and won in Formula BMW, Star Mazda, Indy Lights and recently the IndyCar series. Davison was a runner up in the 2007 Star Mazda Championship and the 2009 Indy Lights championship. He also raced in two Daytona Prototype races in the former Rolex Series.

Deep down Al Carter always wanted to be a race car driver. As a kid Carter started with and found success in the "normal" local sports. He ended up wrestling through college and then graduated to the work world and marriage. A co-worker challenged him to a race that he had to go to Skip Barber Driving School to settle. Soon after the 40-year old Carter was competing and winning two championships in the Skip Barber Series. At 43, he made his professional racecar driver debut in 2010.

Four racing seasons later, Carter is a potential GTD class race winning contender in the 2014 TUDOR United SportsCar Championship. "It wasn't all that long ago, an Aston Martin was just an awesome car I'd get to see in a magazine or a movie," said Carter. "Now to be signed by one of the most competitive teams to race a full season in an Aston Martin Vantage V12, 'c'mon man!!

Just being considered by TRG-Aston Martin Racing, was an honor and a testament to how I've progressed as a driver. Getting signed to campaign an entire season at this high level, I certainly appreciated their confidence and respect. I am looking forward to the opportunity to surprise the paddock and create some addition accomplishments for TRG in GTD in 2014" ended Carter.