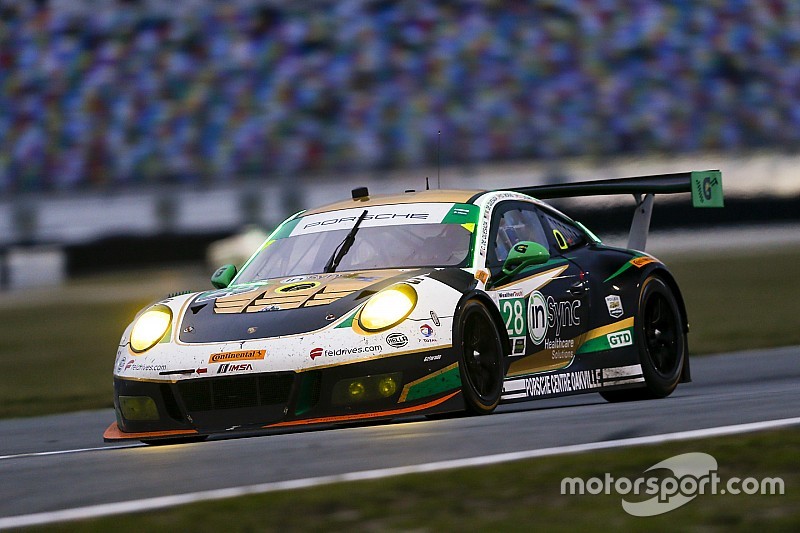 Alegra Motorsports came away with a surprise GTD class victory at the Rolex 24 Hours at Daytona on Sunday.

Their driver lineup for this endurance race was comprised of Carlos de Quesada, his son Michael de Quesada, Daniel Morad, Jesse Lazare, and Michael Christensen. The team was not a favorite going into this race and looked over by most, but by the time the checkered flag came around, everybody knew they were there.

The No. 28 Porsche 911 GT3 R didn't look like much of a threat throughout the race, but it showed up when it mattered most.

"Yeah, that was quite exciting. We hadn't really been in the lead until the last hour, but that was all according to plan, obviously. It's always difficult to make that plan happen," said the elder de Quesada.

The unfortunate engine failure for the Scuderia Ferrari and a stellar pit stop by the Alegra crew allowed the Porsche to move into the race lead as the event moved into the final hour. However, they were never allowed to sit comfortably with the competition breathing down their neck as the minutes clicked away. At the finish, Christensen edged Christopher Mies by just 0.293 seconds, the closest margin of victory among the four classes this weekend.

The win comes a decade after the team's other Daytona triumph in the 2007 running of this same event. While Carlos was a part of the winning roster, this is a first for the remaining four drivers. In fact, three of them were making their Rolex 24 debuts this weekend.

"Obviously very excited to be here," added the elder de Quesada in the post-race press conference. "It was just unbelievable for us. We had the right team, the right drivers, the right equipment ... Everything after that is luck."

While recalling the race, he took a moment to let it all sink in, trying to put his emotions into words. "It's just been amazing. I can't believe we're actually sitting here. I'm still in shock right now, so just bear with me. These kids were just unbelievable. We went to the first test (and) they performed extremely well. They were just so cautious, they listen, they weren't pushing the car too hard. They were being safe with it and what more can you use from these kids?

"And Michael Christensen ... What a performance by this driver. I mean, absolutely amazing. He got in the car with less than three hours to go and just performed flawlessly -- not one mistake. All the pressure was on him and just because he performed was so incredible to watch."

Albuquerque: A true racer “would feel a bit ashamed” after clash