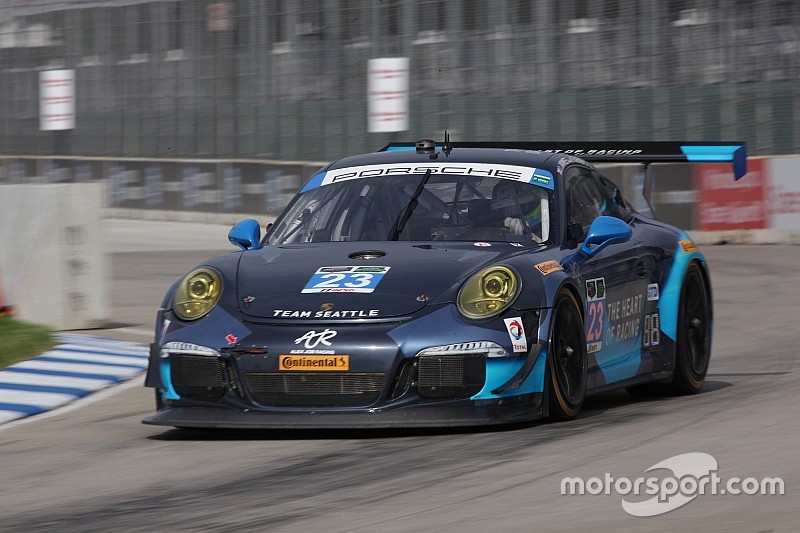 Detroit – All cylinders were firing for Alex Job Racing in the Chevrolet Sports Car Classic presented by Metro Detroit Chevy Dealers, both on and off the track. Shortly after the green flag, Porsche and Alex Job Racing announced that the first two new Porsche 911 GT3 R racecars have been ordered for TUDOR United SportsCar Championship competition on behalf of WeatherTech Racing and Team Seattle.

Running in the sixth position, Ian James pitted under green early in the race. The first full-course caution came out one lap following his stop. While the GTD leaders pitted for the lone pit stop of the race, co-driver Mario Farnbacher found himself in the lead. He never looked back, leading the remainder of the race. The quickest lap of 1:33.086 for the team came on lap 45 of 57 circuits.

We had a strategy to be the first to pit at the 30 minute mark, so we were just about saving fuel.

Coming in second place were Christina Nielsen and James Davison in the No. 007 Royal Purple/Orion Energy/LaSalle Solutions/PassTime USA Aston Martin Vantage. Davison closed the race out for the pair, finishing 2.679 seconds behind Farnbacher.

Dion von Moltke started the No. 48 Castrol EDGE Audi LMS on the pole for Paul Miller Racing. Co-driver Christopher Haase finished third, he set the quickest GTD lap of the race on lap 53 at 1:32.628.

The No. 33 ViperExchange.com Dodge Viper SRT GT3-R of Ben Keating and Jeroen Bleekemolen was competitive for much of the race but was forced to retire after encountering a mechanical issue on lap 22, resulting in the first of three caution periods.

"My stint was pretty uneventful. We had a strategy to be the first to pit at the 30 minute mark, so we were just about saving fuel. We had some electric glitches but things started to go well. The caution flags came out in lucky times, right after we made the driver change. This is such a great team to be a part of and fun to get the win. Plus now being part of a Porsche GT Le Mans program for next year is going to be very exciting."

"When I took the car from Ian, I tried to keep my pace up. Then the yellow came out, and it was actually a very long yellow. There was oil in the track and it was the right decision to clean the track. After a few laps I had a bit of the lead and could concentrate on the lead and my driving style so that was good. The second yellow came out and I thought the lead was over, but the Aston was not catching up, so I was driving my style until the second to last yellow when it started to rain. I was actually pretty slow in the wet, I’m still working on getting up and running, I was going so slow."