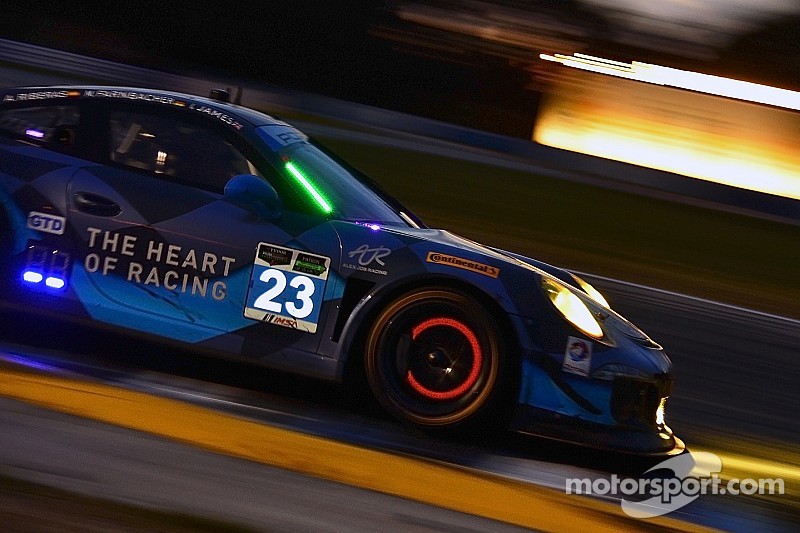 Porsche teams wants to back up Sebring win with another at Mazda Raceway Laguna Seca.

Sometimes, what goes around comes around.

Especially when your name is Alex Job. And even if it takes a year.

Job owns Alex Job Racing, run from a small but thoroughly modern shop in Tavares, Florida. A former racer himself, Job has become a legend in the TUDOR United SportsCar Challenge series, specializing in preparing cars that simply don’t break, and formulating race strategy that so often takes his cars to the front and keeps them there, even when they aren’t the fastest on the track.

Last year, one of the Job-owned GT Daytona Porsches was running strong at his home track, Sebring International Raceway, with a GTD-class win in the 2014 Mobil 1 Twelve Hours of Sebring in sight. Midway through the race, though, a scoring error incorrectly penalized his car, and officials could find no acceptable way to restore the car’s position. They apologized profusely, but losing a chance at a win was a blow to Alex Job Racing in general, Alex Job in particular.

Fast forward – and we do mean fast, when we talk about Alex Job’s two-car Porsche team – to 2015 and the Mobil 1 Twelve Hours of Sebring Fueled by Fresh from Florida, and an incredibly hard-fought race seemed to be falling in favor of the No. 23 Team Seattle/Alex Job Racing Porsche 911 GT America, driven by Ian James, Alex Riberas and Mario Farnbacher.

Of all the cars in the GT-Daytona class, Job says that the Porsche is arguably the hardest on tires and brakes. A stellar pit stop had put the Porsche out front, ahead of a pair of hard-charging Dodge Vipers, an Aston Martin and a Ferrari. With worn tires and fading front brakes, Farnbacher was struggling mightily to keep the No. 33 Riley Motorsports Viper behind him.

But then, disaster struck: Farnbacher, his brake pedal going to the floor in nearly every application, slightly overshot Turn 10, driving into the dirt. Before he could get the Porsche back on track, the Viper got by.

Game over. “Our job then was to try and hang onto second place,” Job recalls. The sister car, the No. 22 WeatherTech Porsche, had run well all day and the two cars spent some time running first and second in class, but it had to make a brake change, dropping the No. 22 to seventh in class. Second and seventh – not bad, but not what Job hoped for.

And then, with only a few minutes remaining, perhaps one of the best arguments yet that Karma exists: Unbeknownst to the rest of the field, the No. 33 Viper had been suffering from a pinhole leak in the radiator. The Ben Keating-led team, which had won the season-opening Rolex 24 Hours at Daytona, had two choices: Come in and add radiator fluid, but lose any shot at winning, or stay out and hope the engine lasted. Keating is a racer, and there was really no choice – the Viper stayed out.

And with just two laps left, the Viper overheated, the engine quit, and the car coasted down pit lane. “Super Mario,” as Job calls him, was back in the lead, and crossed the finish line first.

“It was a gift,” says Job. Plain and simple – or as simple as TUDOR Challenge racing gets. It was Job’s ninth Sebring win. “He’s truly in a class by himself at Sebring,” says Scott Atherton, president of IMSA, the TUDOR Challenge sanctioning body.

But Sebring is just one race; there’s a whole season left as the GT-Daytona cars return to action this weekend at Mazda Raceway Laguna Seca in California for the Continental Tire Grand Prix. Though this is the fourth race on the TUDOR Championship schedule, it’s the third race for the GT Daytona and Prototype Challenge cars, as the track used for the last outing, the tight, narrow Long Beach street course, was simply too short for all four of the TUDOR Championship classes.

This year, the Continental Tire Monterey Grand Prix powered by Mazda at Mazda Raceway Laguna Seca differs a bit from last year’s race: Rather than split the four classes in the TUDOR United SportsCar Championship into two separate races, everyone will be on track at the same time for a two hour, 40 minute race on the rolling 2.238-mile road course, considered one of the most beautiful, most challenging tracks in the country.

Traffic will be an issue

There are 46 entries in all four classes, so managing lapped traffic will be a huge challenge for the front-running drivers. In the fastest class, Prototype, Wayne Taylor Racing will be looking to back up its Long Beach win with another victory for their Konica Minolta Chevrolet Corvette Daytona Prototype, while the Long Beach winner in GT Le Mans, the Bobby Rahal-run Team RLL BMW Z4 GTE hopes to ride that momentum into a victory in the series’ second California race of the season.

The TUDOR Championship race will be joined by the Continental Tire Sports Car Challenge series at 4 p.m. ET Saturday, and by a pair of races for the Lamborghini Super Trofeo series – one Saturday morning at 11 a.m. ET, and the second Sunday at 1:15 p.m.

That race will be followed by the Continental Tire Monterey Grand Prix powered by Mazda at 4:05 p.m. ET. That race will air live on IMSA.com at 4 p.m. ET Sunday, and will air on FOX Sports 1 on May 17 at 9 a.m. ET.

After that, next up for the TUDOR United SportsCar Championship: The Chevrolet Sports Car Classic at Belle Isle in Detroit, May 29-30.