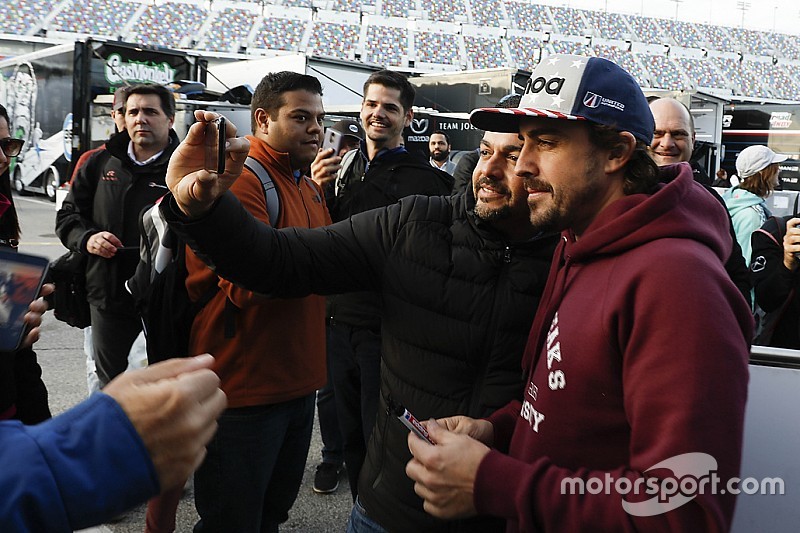 Fernando Alonso says the access that fans have to the cars and stars in IMSA’s Rolex 24 Hours at Daytona would be impossible to imagine in Formula 1.

This weekend’s race will be the second occasion in which the two-time Formula 1 World Champion has taken part in the traditional season-opener for the IMSA WeatherTech SportsCar Championship.

Although last year his United Autosports Ligier LMP2 was classified 38th after a variety of troubles, Alonso said he enjoyed encountering the fans and their enthusiasm – an experience he was exposed to again at the Roar Before The 24 a couple of weeks ago.

“There were a lot of good moments last year and already this year with a couple kids that were even jumping in the car at one point!’’ said Alonso. “They get really close to the teams, to the drivers, to the cars. They can even touch the car if they want.

“It’s just something unthinkable in Formula 1 or racing in Europe, so I think that’s the nice part of this atmosphere and this race. I know it will be even bigger with all the fans here and how close they are on pit lane as well.

“When you jump in the car, you’re still signing autographs and taking pictures even with the helmet on, waiting for the car to come to pit lane. Sometimes you need to tell them you are in a critical moment and you should be ready to jump in.

“But at same time if you embrace that and enjoy that, it is a very nice event and very nice emotion to see all the passion from the fans when they see the cars.’’

This year, Alonso is sharing the Wayne Taylor Racing Cadillac DPi-V.R with fellow ex-F1 driver and current Toyota Gazoo Racing World Endurance Championship teammate Kamui Kobayashi, as well as WTR’s full-season drivers Jordan Taylor and Renger van der Zande. He says his expectations are higher, although he stopped short of predicting a win with the team-car combo that conquered the Rolex 24 and the IMSA championship in 2017.

“I definitely feel I am in a much better position this year compared to last year,’’ said Alonso. “Last year, this was my first U.S. sports car race and my first closed-cockpit experience and definitely this year, I’m ready to enjoy it a bit more and use the experience of my first WEC season as well.

“Everything is much more open than racing in Europe. The target this year is definitely to be more competitive on the track and I’m happy. I’m sure that with the Konica Minolta Cadillac and Wayne Taylor Racing, we can be in that position.”

Jordan Taylor, however, said: “At this point, we’re optimistic. From a car point of view, we made a lot of progress with some changes [in the Roar test]. It was also good to get Alonso and Kobayashi through the car to get them comfortable driving-wise and seat-wise and ergonomics.

“They bring so much experience and information from what they’ve done in Formula 1 and WEC and in Japan to help us learn, and hopefully we’ll be ahead of the curve all through race weekend.’’