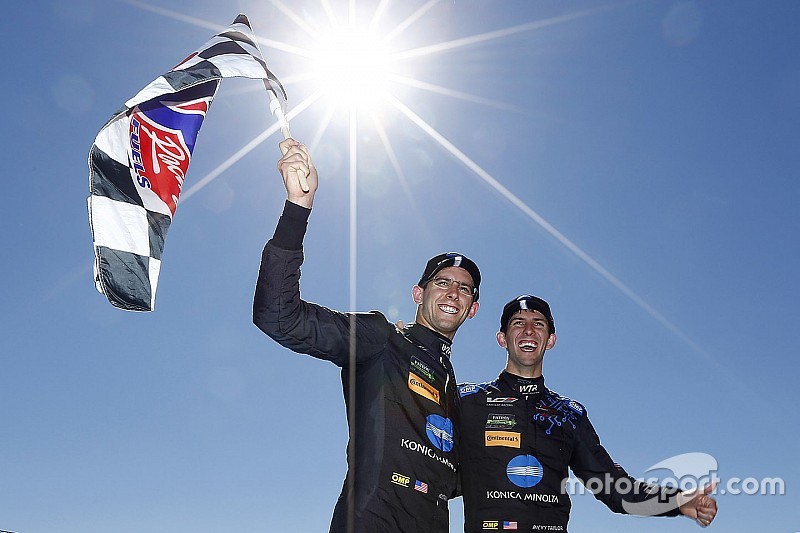 Jordan and Ricky Taylor dominated the fourth round of the IMSA WeatherTech SportsCar Championship at Circuit of the Americas in their WTR Cadillac, while the GTLM class hit the self-destruct button at the very first corner.

From the start, WTR’s Ricky Taylor led Johannes van Overbeek’s ESM Nissan and the Action Express-run Cadillacs of Eric Curran and Christian Fittipaldi. Taylor pulled away out front at the rate of one second per lap.

Van Overbeek was soon forced to pit for a new nose after he was driven into by the wayward GTD-class Mercedes of Kenny Habul, dropping the #22 ESM Nissan to 14th.

The #5 AXR Cadillac got past the #31 car by the time of the second full-course yellow, an hour into the race. They battled furiously over second, but had nothing for either Taylor – who could pull away as they chose.

"That was the best car I've ever had," said Ricky Taylor. "Being able to control the race like that was an amazing feeling."

The battle for second was settled when the #5 car of Barbosa needed pushing down the pitlane having run out of fuel.

That promoted Scott Sharp/Ryan Dalziel to third in the #2 ESM Nissan, although Dalziel had to work for it against the #85 JDC-Miller Oreca LMP2 of Misha Goikberg/Stephen Simpson.

Late drama struck the third-placed #2 Nissan when it caught fire with just 15 minutes to go, and after a few more laps of Dalziel nursing it, he pulled off in a huge cloud of smoke, which put the race under a final full-course yellow with just eight minutes remaining.

The Fittipaldi/Barbosa Cadillac also had to battle past Simpson in the closing laps, and was promoted to third in a Cadillac 1-2-3.

The Marc Goossens/Renger van der Zande Multimatic/Riley lost a likely fifth-place finish in the final 25 minutes with a power steering issue, which instead went to the delayed #22 ESM Nissan.

A chaotic first corner took out a number of leading lights in the GTLM class, as both Fords ganged up on the sole Ferrari, spinning it around on the exit of Turn 1. The rotating Risi Ferrari of the hapless Giancarlo Fisichella was collected by the #4 Corvette of Tommy Milner and the #912 Porsche of Wolf Henzler.

“All I saw was a red Ferrari sideways in front of me,” rued Milner. “I [hit] it going backwards across the track.”

With both Fords and the Ferrari out of the equation, that allowed BMW to hold an early 1-2 with its M6s, John Edwards leading Alexander Sims, with Patrick Pilet’s #911 Porsche next up.

Pilet passed Sims for second in class on lap 15, and grabbed the lead from Edwards just before the second full-course yellow.

The #24 BMW, with Martin Tomczyk in for Edwards, regained the lead in the pitstops, but the #25 sister car – now driven by Bill Auberlen – pulled away before the fuel hose was disengaged and received a penalty.

The frontrunning #911 Porsche of Dirk Werner (in for Pilet) was then assaulted by a GTD-class Lexus, spinning it around and losing 13s to the #24 BMW – but both Tomczyk and Werner were stung by a penalty for running through the red light at the end of pitlane.

This all played into the hands of Corvette, whose #3 car of Jan Magnussen and Antonio Garcia took over a huge lead, with the #25 BMW promoted back to second with the #24 BMW in third and the #911 Porsche fourth.

In GTD, the polesitting Alegra Porsche of Mathieu Jaminet/Daniel Morad led the #48 Lamborghini of Madison Snow/Bryan Sellers, but the car to watch as the race rolled towards its final hour was the #33 Mercedes of Ben Keating and the remarkable Jeroen Bleekemolen.

Bleekemolen outbraked Sellars and Morad in successive laps to grab the lead, and then gapped them by 3.5s on the next tour!

Alessandro Balzan drove a stout final stint in his Ferrari 488 to grab second from Sellars, and Tristan Vautier stole third by lunging past Sellars at Turn 1 on the final restart.