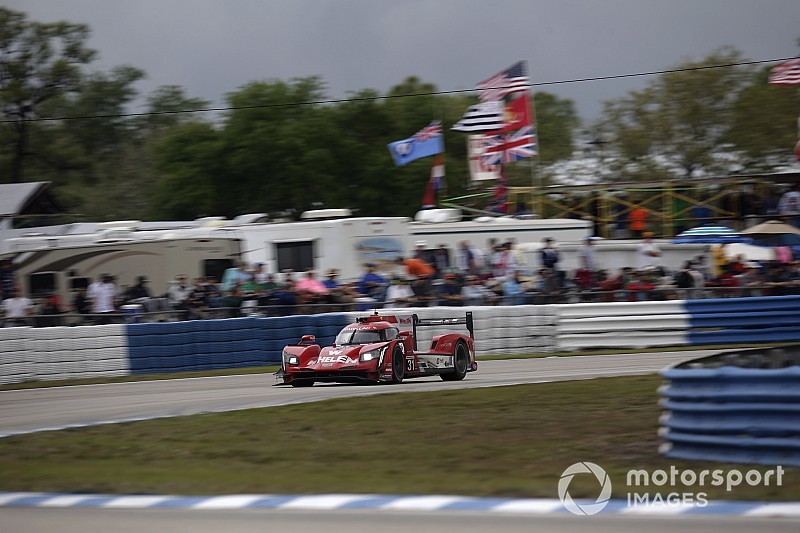 Timo Bernhard caused the first full-course caution (post-yellow start) at the 2hr20min mark when the #77 Mazda RT24-P ground to a halt while in sixth and caught fire.

Following a rash of pitstops, Felipe Nasr and Brendon Hartley in the #31 and #5 Action Express Racing Cadillac DPi-V.Rs led, followed by Tristan Vautier in the JDC Miller Cadillac, Harry Tincknell in the #55 Mazda and Jordan Taylor in the Wayne Taylor Racing Cadillac.

However, at the restart, both Vautier and Tincknell got past Hartley, although Tincknell stopped before his rivals for a new set of tires.

Nasr then stretched his advantage to almost half a minute, while Olivier Pla has taken over the remaining Mazda and heads the second AXR Cadillac of Hartley, Misha Goikhberg who is now steering the #85 JDC Miller Cadillac, Matthieu Vaxiviere in the WTR Caddy and Chris Miller in the second JDC machine.

Just past the four-hour mark, Pla stopped, presenting AXR with a 1-2.

IndyCar ace Alexander Rossi is now at the wheel of the #7 Acura Team Penske ARX-05 but is seventh and a lap down. Simon Pagenaud has replaced Juan Pablo Montoya in the #6 Acura but he had to have the rear deck replaced and is now three laps down.

Ford in control of GTLM

In GTLM, the Mazda-induced yellow bunched up the Richard Westbrook-driven #67 Ford GT, the two BMW M8s of Philipp Eng and Colton Herta, and Sebastien Bourdais’ Ford.

Bourdais would demote his IndyCar rival Herta at the restart and then closed right onto the tail of Eng and eased past into second soon after the 3hr mark. The gap to Westbrook the leader and his teammate was now 10sec, and he got it down to 7.5sec before the stops.

Ten minutes later, BMW’s fortunes took a further knock as Jan Magnussen drove the #3 Corvette C7.R around the outside of Herta into fourth place.

Another round of stops saw Westbrook hand over his Ford to Ryan Briscoe, and he continued to lead a Ford 1-2, chased distantly by Eng, Magnussen and Herta.

The Porsche 911 RSRs of Nick Tandy and Earl Bamber are sixth and seventh but a lap down following their hopeless handling in the wet, while the #4 Corvette, now in Oliver Gavin’s hands, is 11 laps down after a long stop to replace a halfshaft and alternator belt.

Heading into the third hour, Justin Marks continued to lead GT Daytona in the Meyer Shank Racing Acura NSX ahead of Lars Kern in the Pfaff Motorsports 911 GT3 R – a battle that had been going on since the drop of the green – until Marks spun at Turn 17 and fell to eighth.

Following the next round of stops, Bleekemolen led from the Grasser Lamborghini which Bortolotti had handed to Rik Breukers, Toni Vilander who’d taken over the Ferrari, while Beatriz ran fourth ahead of Kern, Machavern and Mario Farnbacher, who replaced Marks in the #86 MSR Acura.