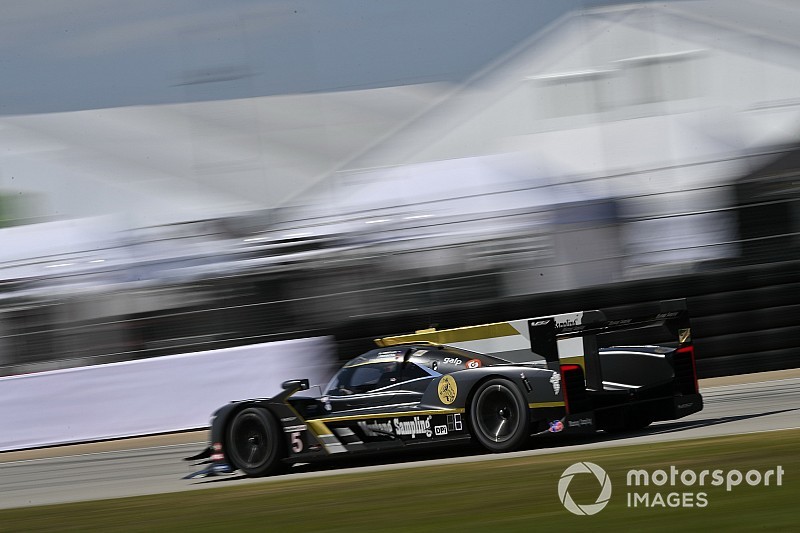 The #5 Action Express Racing Cadillac DPi-V.R of Filipe Albuquerque is leading teammate Felipe Nasr with four hours to go in the Sebring 12 Hours, after the latter elected for an early stop to get Michelin Endurance Championship points.

Just before the eight-hour mark ticked by, Nasr snatched the lead from Wayne Taylor Racing’s slightly off-sequence #10 Cadillac driven by Matthieu Vaxiviere, but he had been driving at great speed and soon after had to duck into the pits.

That dropped him only to second behind the other AXR Cadillac, piloted by Albuquerque. He runs 20sec ahead of Vaxiviere in the WTR car.

Chris Miller spun the #84 JDC-Miller Cadillac but was able to continue in fourth, a lap down.

Strong stints from Alexander Rossi and Helio Castroneves have seen the #7 Acura Team Penske ARX-05 rise to fifth but it remains a lap down, 19sec ahead of the CORE autosport Nissan DPi currently driven by Romain Dumas, while Misha Goikhberg is also a lap down in the second JDC car.

Olivier Pla is a further lap back in the recovering #55 Mazda RT24-P.

The second Acura, the #6 car of Juan Pablo Montoya, is now nine laps down after losing a further five minutes to a rear deck change.

Jan Magnussen is second in the #3 Corvette C7.R, while the #24 BMW M8 is third after Jesse Krohn passed Dirk Muller in the second Ford. Those two cars are now driven by Philipp Eng and Sebastien Bourdais respectively and they run less than five seconds apart.

Patrick Pilet’s #911 Porsche 911 RSR, which got onto the lead lap at the halfway point, has now passed Colton Herta’s M8 for fifth.

Sixteen seconds further back is Jeff Westphal in the Scuderia Corsa Ferrari 488, which is some 10sec ahead of a great battle between Ana Beatriz in the other NSX and the Magnus Racing Lamborghini Huracan of Spencer Pumpelly.

Turner Motorsport’s BMW M6 dropped out of the lead battle after a reported broken shock absorber while Bill Auberlen was at the wheel. Dillon Machavern currently steers that car in 11th.