Balzan took the lead when Tomy Drissi pitted with 33 minutes remaining, holding off the rest of the GT Daytona (GTD) class for the final 20 laps of the one-hour, 40-minute event. It was the second career North American sports car racing victory for Balzan – and the first in the TUDOR United SportsCar Championship – and the first career victory for Westphal.

“It was a nightmare out there, because there were five or six cars that could have won today,” said Balzan. “It was difficult for me to stay focused in the car. I think I said some bad words to my engineer, I said to him, ‘please, shut up’ because I needed 110 percent of myself today.” 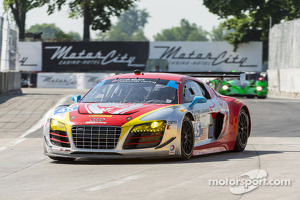 For the second consecutive race, Pumpelly and the No. 45 Flying Lizard Motorsports team suffered heartbreak in the closing laps. After running out of fuel while leading on the final lap at Mazda Raceway Laguna Seca, Pumpelly looked to rebound at Detroit Belle Isle and attempted to pass Balzan for the lead with less than five minutes remaining.

Pumpelly ran wide and quickly lost the position to the No. 23 Heart of Racing Team Seattle/Alex Job Racing Porsche 911 GT America of Mario Farnbacher and the No. 48 Paul Miller Racing Audi R8 LMS of Christopher Haase.

With Pumpelly out of the picture, Farnbacher and Haase set their sights on Balzan, but fell just short. Farnbacher took the checkered flag 0.297 seconds behind Balzan to finish second for he and co-driver Ian James, while Haase and co-driver Bryce Miller finished third.

The race was slowed by full-course caution twice for 11 laps. The first, from Laps 22-26, was the result of water on course in Turn 6. The second full-course caution lasted for 23 minutes for repairs to the tire wall in Turn 12 following an incident involving the No. 81 Tully’s Coffee Porsche of Damien Faulkner.

From the podium to Le Mans for Taylor, Westbrook